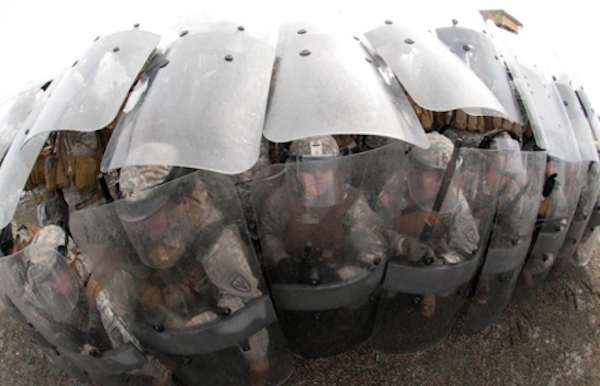 We Cannot Have Political Surveillance And Democracy, Too

From the UK to the United States, law enforcement at all levels is conflating dissent with terrorism, threatening the possibility for open societies and democratic change. In both countries, the war on terror—cast as an endless and border-less battle over ideology and religion—provides dangerous new latitude for governments to criminalize and monitor speech. But political surveillance today remains what it has always been: a way for governments to uphold the status quo in the face of demands for change.

Perhaps then it shouldn’t come as a surprise to find that politicians who ally with activists are prime targets of state security spying, in both London and Boston.

New reports out of England confirm that London’s Metropolitan Police has been keeping track of politicians in a “extremists” database.

Through the use of data protection laws, Jenny Jones, a London Green Party peer, and Ian Driver, a local councillor for the party, obtained files on themselves held in the database, which is supposedly used to monitor activists who use criminal means to push their ideas.

Jones, it was revealed, has been monitored over an 11 year period, including when she campaigned to be London’s mayor. The sort of information gathered exists mostly in the public domain: tweets copied from her account, and descriptions of her appearances at protests against the Iraq war; it’s all information related to her work as a politician, and nothing illegal.

Jones—a vocal critic of police surveillance—described the file on her as “pathetic” in an opinion piece published in the British newspaper.

The working definition of “domestic extremism” used by the Metropolitan Police states that it “relates to the actions of groups or individuals who commit or plan serious criminal activity motivated by a political or ideological viewpoint,” according to a Freedom of Information Request by independent police watchdog Netpol.

As broad as this definition is, two politicians that have no record of criminal behaviour still don’t fit into it. “Even if that is what you’re saying [extremism] is, the people that you’re gathering information on do not fit that criteria,” Netpol coordinator Kevin Blowe told me.

We discovered something similar here in Boston in May, when the Partnership for Civil Justice Funds published documents pertaining to law enforcement surveillance of Occupy protests. Members of the so-called counterterrorism fusion center in Boston, called the Boston Regional Intelligence Center (BRIC), kept tabs on the political associations and speech of then-State Representative Marty Walsh, who’s now the Mayor of Boston.

The reaction to this news in Boston was surprisingly muted. Could it be that people have become accustomed to the idea that a spy center established to monitor and catch terrorists is keeping records of the perfectly legal political activities of a wide variety of organizers and groups, including elected officials? Or is it that people don’t see a problem with police officials keeping tabs on lawful political activity?

If it’s the latter, we have a serious problem. Government surveillance of political speech chills democratic engagement and stymies social and political progress. It sends a message to ordinary people and politicians alike: “We are watching you.”

Police justifications for this behavior are nonsense, both here and across the pond. The UK police say they need to keep records of political speech in case some activists choose to use violence as a means to achieve their goals. In Boston, officials claimed Occupy records were maintained for “crowd control” and “traffic” purposes. But the UK police kept records on people who have demonstrated no propensity towards violence, and in Boston, police officers made note of details related to hundreds of events that had no bearing on crowd control or traffic. Both departments monitored the political activities of elected officials.

What’s this political surveillance really about? Like most surveillance, it’s about control.

Police in the UK and US have been keeping records of and tracking dissident speech and association for decades. The problem isn’t new. But it’s getting more and more dangerous in part because of the blurring of the lines—among officials—between behavior characterized as “terrorist” and that which is obviously pure expression of political dissent.

The blurring of these lines isn’t an accident, and it isn’t even a product of the latest war. But today the stakes are higher than ever before. In a never-ending “war on terror”, with the entire world cast as the battlefield, the conflation of the dissident with the terrorist has concrete ramifications for individuals that go beyond being smeared as a villain. As soon as the government identifies you as a terrorist, you are subject to an entirely different legal regime, one shrouded in secrecy, governed by vague “state secrets” and “national security” claims, and subject to indefinite detention or even extrajudicial assassination.

In domestic law enforcement, the collapsing of the boundary between terrorism and political speech is coming from the very top of the US government.

In the spring of 2014, White House national security advisor Lisa Monaco visited the Harvard Kennedy School and gave a speech that should chill the soul of every person who cares about freedom of expression and democracy. During her remarks, Monaco announced a Department of Homeland Security plan to place an envoy in Boston to tackle “homegrown violent extremism” among communities. As Mike German of the Brennan Center writes in a letter to the Deputy Secretary of DHS, to which the ACLU and the ACLU of Massachusetts are signatories,

Countering violent extremism (CVE) programs are controversial because several government and non-government entities have promoted unfounded and discredited theories of terrorist radicalization that improperly identify First Amendment-protected religious and political activities as precursors to, or predictive of terrorist attacks…

These reports posit virtually identical four-step processes to becoming a terrorist, and both identify First Amendment-protected activities, such as mosque attendance and activism within Muslim political or social groups, as “steps” or “indicators” of increasing radicalization toward violence. Many of the so-called “indicators” are common activities for large numbers of American Muslims, such as wearing religious attire or growing a beard, which increases the likelihood that all Muslims will be unfairly targeted for investigation and surveillance based on these reports. Indeed these reports appear to provide the policy justification for overbroad surveillance of Muslim communities conducted by the FBI and NYPD that have chilled the free exercise of American Muslims’ religious and political rights.

The civil liberties groups that signed on to German’s letter have good reason to be concerned about what the DHS envoy to Boston will be doing, given what Monaco told the audience at Harvard. As German writes, Monaco advised that parents, teachers, and other community members look for “subtle” signs of radicalization:

“For instance, parents might see sudden personality changes in their children at home—becoming confrontational,” she said. “Religious leaders might notice unexpected clashes over ideological differences. Teachers might hear a student expressing an interest in traveling to a conflict zone overseas. Or friends might notice a new interest in watching or sharing violent material.”

Anyone who has ever been a teenager knows that “becoming confrontational”, questioning religious doctrine, possessing curiosity about the world far away from home, and watching or sharing violent material are fairly or extremely common behaviors, and not at all indicative of a predisposition for violence.

Thankfully, the First Amendment provides generally robust protections in the United States, making it difficult for law enforcement to put us in jail for expressing our thoughts and opinions. But the government has carved out a substantial Muslim exemption to the First Amendment, and police surveillance of free speech significantly chills expression—even if we don’t end up in jail for it.

Even worse, government surveillance of protected First Amendment speech doesn’t just threaten the character of an open society; it also imperils public safety. After all, when police officers are tasked to monitor antiwar protests, the political activities of state representatives and unions, and the religious practices of large groups of law-abiding people, they aren’t doing their jobs: solving crimes.

Programs like the “countering violent extremism” pilot in Boston must not operate from the assumption that dissent or religiosity are indicators of potential threats. Young people should never fear that they’ll be reported to the Department of Homeland Security for voicing unpopular views at home, at church, or in school.

Likewise, future Mayors should never have to worry that their support for unions will land them in a counterterrorism center’s spy database. These practices waste money, create a toxic environment of fear and hostility towards the police, and make it more likely that truly dangerous people will slip through the cracks. Perhaps most devastatingly, however, these practices send a clear message that any behavior or speech challenging the status-quo will be viewed as a potentially criminal threat.

Dissent isn’t terrorism, and being Muslim isn’t a crime. Surveillance isn’t about whether you have “something to hide” or not. The kind of discriminatory surveillance happening across the world today, directed at people for their political and religious views, imperils democratic societies.

From the Pentagon to the FBI and all the way down to our state and local law enforcement, the message is clear: dissent is a threat that must be neutralized, and surveillance is the first step towards maintaining the status quo.

But keeping track of the religious and dissident activities of law-abiding people is something authoritarian regimes do, not democracies. The UK and the US want to be seen as inhabiting something called the “free world,” but this kind of politically- and religiously-motivated surveillance erodes that reputation.

We cannot have our democracy and our domestic surveillance industrial complex, too.