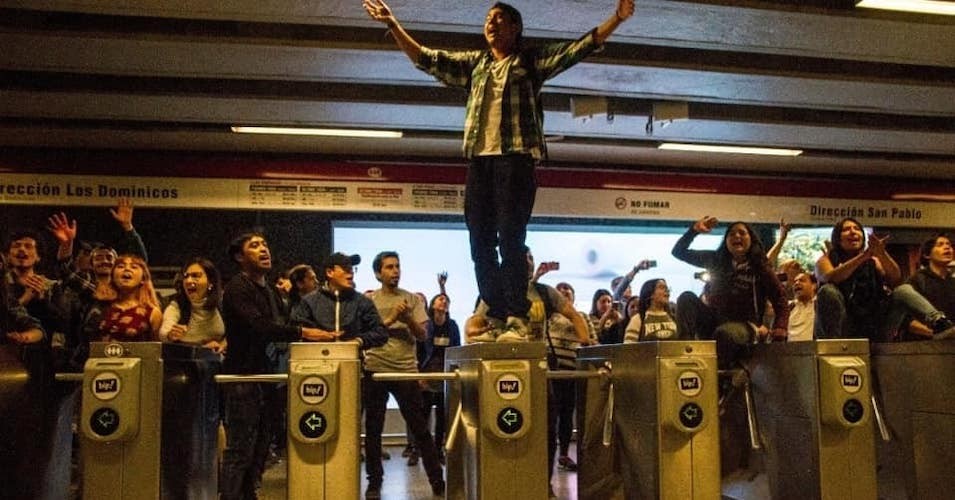 Above Photo: High school protesters in Chile demonstrate at subways against a fare hike. The movement has exploded in recent days. (Photo: Rebel Diaz/Facebook)

The protests in Chile began as transit fare protests, but they are about much more.

The image below tells the story of the crisis of neoliberalism in Chile. 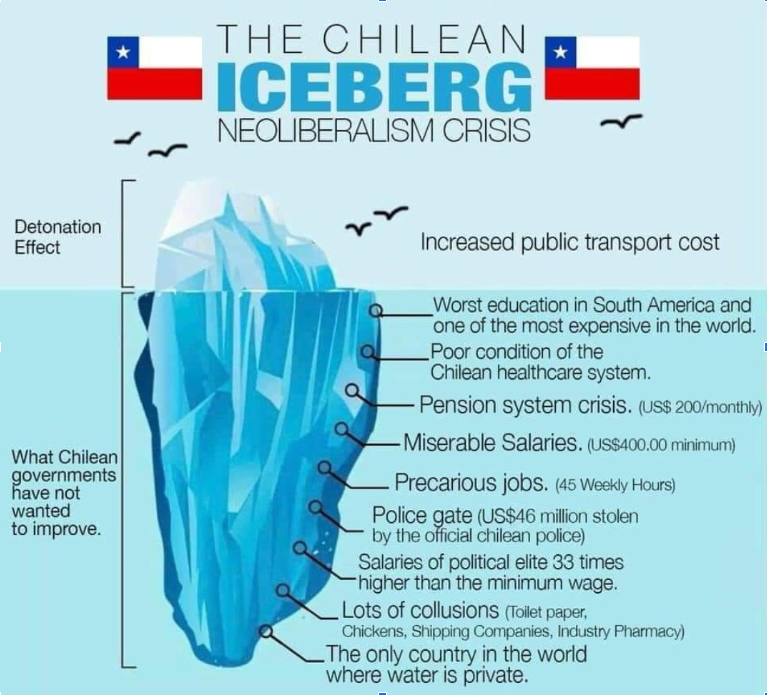 “Something’s not right with this country and 14-year-olds were the first ones to say so—now it’s workers’ turn to say enough is enough.”

As protests against the Chilean government continued Monday, trade unions across the South American country called for a general strike to support demonstrators drawing attention to the nation’s high cost of living, inequality, and injustice.

“We can’t remain indifferent to the social movement out there,” Escondida Union No. 1 president Patricio Tapia, whose organization voted to stop work at the Escondida copper mine for 10 hours Monday night or Tuesday morning, told Bloomberg Monday. “Something’s not right with this country and 14-year-olds were the first ones to say so—now it’s workers’ turn to say enough is enough.”

The movement began with high schoolers protesting subway fare hikes but exploded across the country over the weekend to encompass a wide array of issues after a police crackdown on the teenagers drew widespread anger and outrage.

As Common Dreams reported, billionaire right-wing President Sebastián Piñera has declared a state of emergency over the protest movement and, on Saturday, tried to defuse the situation by suspending the fare increase.

A number of unions said Sunday they were calling for a general strike in solidarity with the burgeoning protest movement.

“Sebastián Piñera does not understand the underlying reasons for the widespread citizen protest throughout the territory,” the unions said in their declaration of intent to strike. “With his attitude it is clear that he is not in a position to continue directing the country.”

#Chile Unions call for a general strike to support protests against a transit fare hike, that erupted into mass demonstrations over economic inequalities. The gov’t declared a #curfew & called the army onto the streets, clashes led to at least 11 deaths.
📰https://t.co/VIKqSIHahS pic.twitter.com/FSFxPfQoko

Protester Constanza Gonzalez told the BBC that the unrest is based in long simmering resentment.

“I think people are angry and this was a thing that had been coming for quite a long time,” said Gonzalez.

Professor Richard D. Wolff tweeted that the protests were the natural outcome of an unstable system.