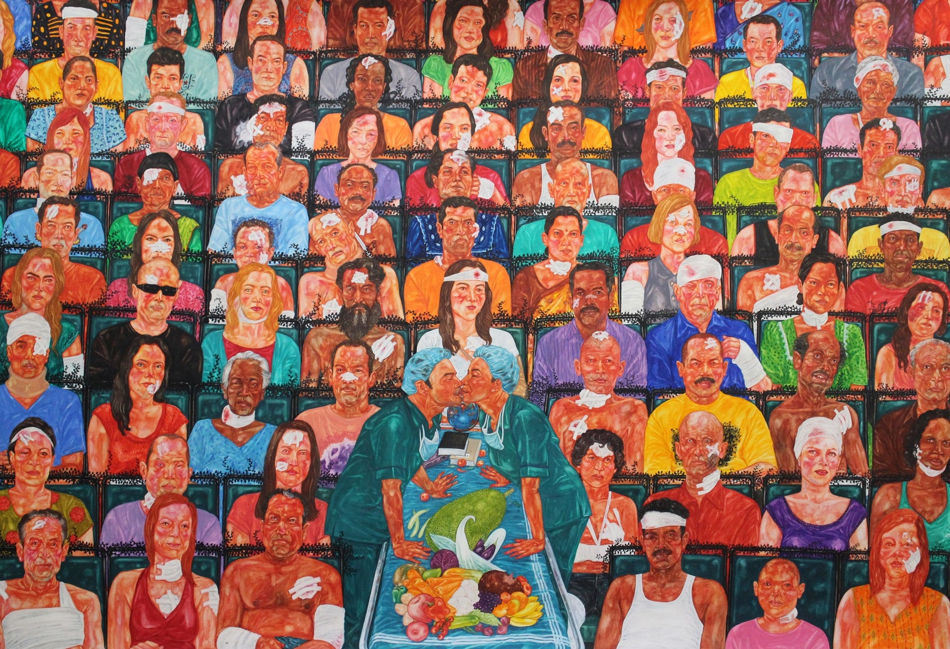 Bittersweet is the passage of this year. There have been some immense victories and some catastrophic defeats, the most terrible being the failure of the Global North countries to adopt a democratic attitude towards confronting the COVID-19 pandemic and creating equitable access to key resources, from life-saving medical equipment to vaccines. Tragically, by the end of this pandemic, we will have learnt the Greek alphabet from the variants named after its letters (Delta, Omicron), which continue to emerge.

Cuba leads the world with the highest vaccination rates, using its indigenous vaccines to protect its population as well as those of countries from Venezuela to Vietnam, following a long history of medical solidarity. The countries with the lowest vaccination rates – currently led by Burundi, Democratic Republic of the Congo, Haiti, South Sudan, Chad, and Yemen – are amongst the poorest in the world, reliant on foreign aid since their resources are essentially stolen, such as by being acquired at outrageously low prices by multinational companies. With 0.04% of Burundi’s 12 million people vaccinated as of 15 December 2021, at its current rate of vaccination the country would only achieve 70% coverage by January 2111.

In May 2021, Dr Tedros Adhanom Ghebreyesus, the head of the World Health Organization, said that ‘the world is in vaccine apartheid’. Little has changed since then. In late November, the African Union’s vaccine delivery co-chair Dr Ayoade Alakija said of the emergence of Omicron in southern Africa, ‘What is going on right now is inevitable. It’s a result of the world’s failure to vaccinate in an equitable, urgent, and speedy manner. It is as a result of hoarding [vaccines] by high-income countries of the world, and quite frankly it is unacceptable’. In mid-December, Ghebreyesus appointed Alakija as the WHO Special Envoy for the Access to COVID-19 Tools Accelerator. Her task is not easy, and her goal will only be met if, as she put it, ‘a life in Mumbai matters as much as in Brussels, if a life in São Paulo matters as much as a life in Geneva, and if a life in Harare matters as much as in Washington DC’.

Vaccine apartheid is a part of a broader problem of medical apartheid, one of the four apartheids of our time, the others being food apartheid, money apartheid, and education apartheid. A new report by the UN’s Food and Agriculture Organization says that the population of undernourished people in Africa has increased by 89.1 million since 2014, reaching 281.6 million in 2020. It is worthwhile to consider Dr Alakija’s question about humanity, about the worth assigned to different human beings: can a life in Harare be valued as much as a life in Washington DC? Can we, as a people, overcome these apartheids and solve the elementary problems that are faced by the people of our planet and end the barbarous ways in which the current economic and political system tortures humankind and nature?

A question like that sounds naïve to those who have forgotten what it means to believe in something – if not in the idea of humanity itself, then at least in the binding United Nations Charter (1945) and the partly binding UN Declaration of Human Rights (1948). The Declaration calls upon us as a people to commit to upholding each other’s ‘inherent dignity’, a standard that has collapsed in the years since heads of governments signed onto the final text.

Despite these apartheids, several advances for humankind are worth highlighting:

The Chinese people eradicated extreme poverty, with nearly 100 million people lifting themselves out of absolute misery over the past eight years. Our first study in the series ‘Studies in Socialist Construction’, entitled Serve the People: The Eradication of Extreme Poverty in China, details how this remarkable feat was achieved. Indian farmers bravely fought for the repeal of three laws which threatened to uberise their working conditions, and – after a year of struggle – they prevailed. This is the most significant labor victory in many years. Our June dossier, The Farmers’ Revolt in India, catalogued the struggle over land in India and the farmers’ militancy over the past decade. Left governments came to power in Bolivia, Chile, and Honduras, overturning a history of coups and regime changes in these countries that run from 1973 (Chile) to 2009 (Honduras) to 2019 (Bolivia). A year ago, our January dossier, Twilight, considered the erosion of US control over global affairs and the emergence of a multipolar world. The failure of the United States to attain its objectives in these countries and to overthrow the Cuban Revolution and the Venezuelan revolutionary process through hybrid wars is a sign of great possibility for people in the American hemisphere. Trends show that in 2022, Lula da Silva will defeat whoever is the right’s candidate in Brazil, ending the atrocity of Jair Bolsonaro’s governance. Our May dossier, The Challenges Facing Brazil’s Left, is a good place to read up on the political dilemmas in Latin America’s largest country. A rising tide of anger on the African continent against the increasing military presence of the United States and France found expression in the town of Kaya in the western part of Burkina Faso. When a French military convoy drove near the town in November, a crowd of demonstrators stopped it. At that point, the French launched a surveillance drone to monitor the crowd. Aliou Sawadogo (age 13) shot down the drone with his slingshot, ‘a Burkinabé David against the French Goliath’, wrote Jeune Afrique. Our July dossier, Defending Our Sovereignty: US Military Bases in Africa and the Future of African Unity, was co-published with the Socialist Movement of Ghana’s Research Group and tracks the growth of the Western military presence on the continent. We have seen strikes by care workers of all kinds across the world, from health workers to domestic workers. These workers have been hit hard by the cruelty of neoliberalism and by what we have called CoronaShock. But these workers have refused to cower, refused to surrender their dignity. Our March dossier, Uncovering the Crisis: Care Work in the Time of Coronavirus, provides a map of the pressures weighing on these workers and opens a window into their struggles.

Of course, this is not an exhaustive list. These are merely some of the benchmarks of progress. Not every advance is clear-cut. After twenty years, the United States was forced to finally withdraw from Afghanistan as it lost the war to the Taliban. None of the United States’ aims for its war seem to have been attained, and yet it continues to threaten this country of close to 39 million people with starvation. The United States has prevented Afghanistan from accessing its $9.5 billion in external reserves that sit in US banks, and it has prevented Afghanistan’s government from taking its place in the UN system. As a consequence of the collapse of foreign aid, which accounted for 43% of Afghanistan’s GDP last year, the UN Development Program calculates that the country’s GDP will fall by 20% this year and then by 30% in subsequent years. Meanwhile, the UN report estimates that by 2022, the country’s per capita income may decline to nearly half of 2012 levels. It is estimated that 97% of the population of Afghanistan will fall below the poverty line, with mass starvation a real possibility this winter. A life in the Wakhan Corridor is not valued as much as a life in London. The ‘inherent dignity’ of the human being – as the UN Declaration puts it – is not upheld.

This is not merely an Afghanistan matter. The newly released World Inequality Report 2022 shows that the poorest half of the world’s people owned merely 2% of the total private property (business and financial assets, net of debt, real estate), while the richest 10% owned 76% of the total private property. Gender inequality shapes these numbers, since women received barely 35% of labor income compared to men who received 65% (a slight improvement over 1990 figures, when women’s share was 31%). This inequality is another way of measuring the differential dignity afforded to people along class lines and along the hierarchies of gender and nationality.

In 1959, the Iranian communist poet Siavash Kasra’i wrote one of his elegies, Arash-e Kamangir (‘Arash the Archer’). Using the popular mythology of the ancient battle fought by the heroic archer Arash to liberate his country, Kasra’i depicts the anti-imperialist struggles of his time. But the poem is not only about struggles, for we also wonder about possibilities:

I told you life is beautiful.
Told and untold, there is a lot here.
The clear sky;
The golden sun;
The flower gardens;
The boundless plains;

The flowers peeping up through the snow;
The tender swing of fish dancing in crystal of water;
The scent of rain-swept dust on the mountainside;
The sleep of wheat fields in the spring of moonlight;
To come, to go, to run;
To love;
To lament for humankind;
And to revel arm-in-arm with the crowd’s joys.

Warmest of wishes for a revolutionary 2022,