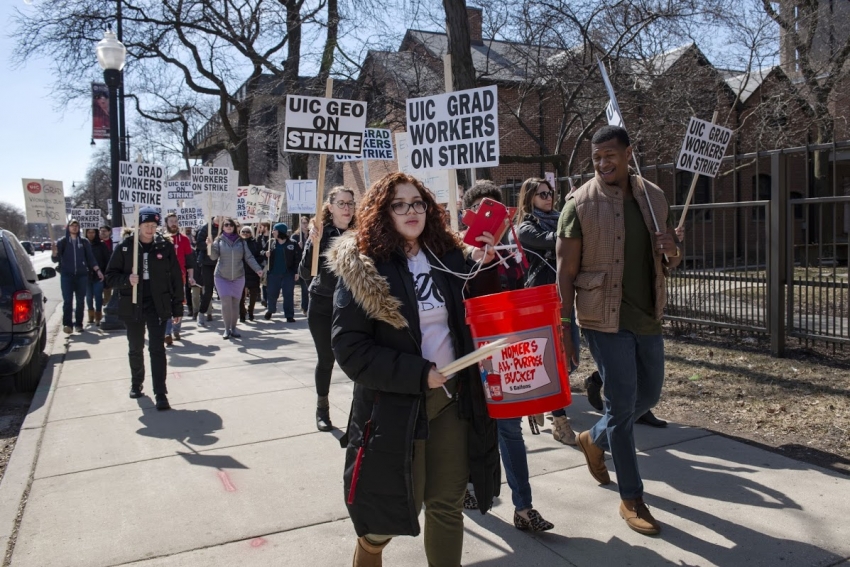 “We Demand Food For Thought”: UIC Grad Workers On Strike For Living Wages And Respect

Above Photo: Graduate employees at the University of Illinois at Chicago began an indefinite strike on March 19, demanding livable wages and better working conditions as part of a national wave of educator-lead organized labor efforts. (Photo: Hannah Steinkopf-Frank)

In front of the historic Jane Addams Hull-House Museum on March 19, University of Illinois at Chicago (UIC) graduate workers began an indefinite strike. The union is joining a national movement of higher education employees demanding livable wages and better working conditions in the often-unstable field of academia.

The strike is the result of more than a year of negotiations between UIC Graduate Employees Organization (GEO) Local 6297 and the university administration. Since September 2018, over 1,500 teaching and graduate assistants have worked without a contract. An overwhelming 99.5 percent of UIC GEO members authorized a strike last month as part of a wave of educator work actions, from public school teachers in Los Angeles and West Virginia to faculty at Rutgers University and Wright State University. Jeff Schuhrke, co-president of the UIC GEO and labor history Ph.D. candidate, said the strike exemplifies the vital labor graduate students provide.

“The University of Illinois system just seems to not care about its employees and is always very hostile to collective bargaining and to unions,” Schuhrke told In These Times. “They just try to lowball us and they disrespect us. We’re fed up with it, obviously.”

UIC graduate employees make a minimum salary of $18,065 for two semesters of 20-hour work weeks, with $13,502 in fee and tuition waivers. Schuhrke said this doesn’t account for the amount and quality of labor, which can include teaching classes for up to 60 students. He said since the union was recognized by the university in 2004, “modest” raises haven’t accounted for increasing university fees, which cut into graduate employees’ salaries. Currently, UIC GEO is seeking a 24 percent pay increase over three years, with the university offering 11.5 percent.

“They can give us raises all they want,” he said, “but as long as they can just introduce new fees any time they feel like it or increase the fees, that just serves as a back door pay cut.”

In recent years, the university has boasted record-high enrollment and projects to improve existing infrastructure and invest in academic expansions, including recently acquiring the John Marshall Law School. Schuhrke said, “The reason students come here is for an education, not the shiny new buildings, and we’re the ones providing that education.”

The strike is already having an impact on campus with some classes canceled. On the sunny Tuesday afternoon outside the bustling UIC Student Centers, hundreds of graduate students and allies picketed with clever signs like, “We Demand Food for Thought,” and classic protest chants, such as, “This is what democracy looks like.” A giant inflatable Mother Jones representing the iconic socialist labor organizer watched over the crowd. UIC GEO also organized a GoFundMe to cover strike costs and potential docks in salary, which Schuhrke said the university might use as a scare tactic.

Many striking students said they don’t make enough to pay for living expenses and rely on food aid and other assistance. A Ph.D. student in the biology department who prefers to remain anonymous said he’s working on getting Medicaid for his young child, as he can’t afford campus health care, even with a waiver.

“Better salaries is an important step: lower fees, lower tuition,” he said. “Those things really impact us because we don’t have huge salaries, so every small amount that we can save is a huge help.”

International students who, according to Schuhrke, make up a little under half of the GEO UIC members, are also central to bargaining. They face an additional fee each semester, as well as work limitations, particularly during the summer.

Dominican Republic-native Natalia Ruiz-Vargas came to Chicago to complete a Ph.D. in biology, but said the financial strains can be alienating for people who are not U.S. nationals. “If you have family back home and you’re alone over here and someone gets sick, you can’t really find the money to go back, so it can be a little lonelier,” she said. “We can’t apply for any financial aid outside of what we already have from the university.”

When reached for comment, the university sent a press release that highlighted the union’s right to demonstrate, but stated, “We believe that this work stoppage is not in the best interest of the University, or our students.” While striking graduate assistants aren’t completing instruction, mentoring and coursework revision, many of their students are expressing solidarity.

English and political science undergraduate Joseph Strom is part of the UIC Student and Worker Advocacy Network. A resident assistant on campus, Strom said the strike is an opportunity to educate students about labor issues instead of pairing co-eds against their educators. He said some of his professors are expressing support by giving online work so they don’t have to cross the picket line. The UIC United Faculty union is also currently in negotiations, having worked without a contract since last fall.

GEO Co-President Schuhrke said, “We talked to a lot of our students beforehand and let them know why we’re doing this, that our working conditions are their learning conditions.”

Members of GEO University of Illinois at Urbana-Champaign (UIUC) in Southern Illinois are coming to Chicago to increase demonstration numbers, as they go up against the same administration. In February 2018, the UIUC GEO led an almost two-week long strike for higher salaries and guaranteed tuition waivers. The plastic buckets that provided a soundtrack to their picket are now being used by UIC students. UIUC GEO treasurer Allan Axelrod, who studies agricultural and biological engineering, is spending spring break making multiple trips with fellow graduate students.

“We understand all the issues that are going on there, especially things like the higher incidence of mental health issues that is a product of the poor working conditions of graduate employees,” said Axelrod. “When we show solidarity, we actually are paving the path toward improving our own working conditions because we’re under the same threat each bargaining cycle.”

For Axelrod and others, this extends beyond the public university system. A 2016 National Labor Relations Board (NLRB) decision granting private university students employee status has galvanized student workers to organize through collective labor. Only a few miles from UIC’s Near West Side campus, University of Chicago graduate students have fought since 2007 for recognition of their Graduate Student Union (GSU). Last fall, they participated in one of their school’s biggest demonstrations in recent years, a response to their overwhelming vote in favor of unionization despite administrative pushback.

GSU brought its case to the NLRB, but withdrew along with Yale University and Boston College, worried that under President Trump, a business-friendly Republican majority would overturn the 2016 precedent. Further, last year’s Janus Supreme Court decision prevents public sectors unions from collecting dues from nonmembers. Co-President Schuhrke said they saw a slight membership decrease following Janus, but it “made them more militant and more angry.” No matter how long the UIC strike lasts, graduate students are clearly using it as a teachable moment.

“This [university] administration has a great responsibility,” said Schuhrke. “We hope our students are learning by participating in this and watching this how to stand up for your rights, stand up for justice and organize.”