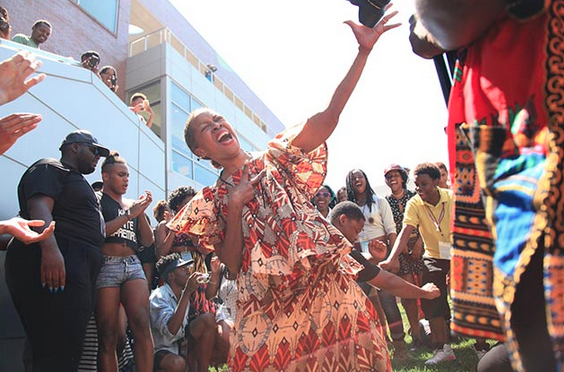 Report From #BlackLivesMatter Convening In Cleveland

Coming together across different ideologies, generations, geographies and experiences, participants in the Movement for Black Lives have the potential, the brilliance and the power to get free and to stay free.

More than 1,500 Black people came together in Cleveland, Ohio, last week for the Movement for Black Lives convening. It was a gathering designed to bring Black people together across different fault lines in order to continue to solidify our vision, our purpose and our relationships with one another.

The convening, which began on July 24, was an opportunity to ask ourselves the question of what a world would look like in which Black lives actually mattered – and not just some Black lives, but all Black lives. This question is increasingly important in a context where, as author and public policy leader Heather McGhee so eloquently stated, Black lives were the first currency of this nation.

This is more important than one might realize. On the surface, the concept of being in “community” and “solidarity” may seem esoteric. But in fact, this practice of solidarity is an essential step toward liberation. Solidarity means Black people of all genders, geographies and generations coming together across class to love each other in a country that traded and sold our bodies for profit. Solidarity means Black people loving each other in a country that designed state programs like COINTELPRO that were intended specifically to dismantle and disrupt once-powerful and vibrant Black liberation organizations and movements.

The consequences of those dynamics – racialized capitalism and state-sanctioned violence – have meant that Black movements for liberation, which have sparked the imaginations of many other oppressed and marginalized communities, have been so weakened and diminished that it has impacted our ability to be powerful together. Given that, we could say that Black love – building community and solidarity – is a liberatory act and an act of resistance.

As we approach the one-year anniversary of the murder of 18-year-old Michael Brown, the Movement for Black Lives convening was also an opportunity to assess our strength and cohesion as a movement. What’s the state of the organizing and the movement-building and the infrastructure in St. Louis, especially as the news cameras have left Canfield Drive, where Brown was murdered, and now reappear in places like the Gilmore Homes in Baltimore, Maryland, where Freddy Gray was murdered?

People in St. Louis loved their brother Mike Brown so much that when he was murdered in August 2014 and bled to death in the middle of the street on Canfield Drive, just steps away from his mother’s home, they sparked a resistance movement that impacted this country and the world in profound ways. The willingness of young people to reject respectability politics, to confront power (in the form of police) directly and militantly, and even to challenge the notion that the only place that resistance can happen is within formalized nonprofit organizations has re-infused the movement with new energy and ideas, new tactics and most importantly, more people.

We are reminded on the heels of this month’s historical convergence of Black people that we have come so far, and that at the same time, we have to challenge ourselves to go further. If it weren’t for the ongoing strength of the resistance movement in Ferguson, the national Movement for Black Lives might risk lacking the strength we need to push forward in ever-growing strength, cohesion and coordination. We need to continue building our strength throughout the country so that a reinvigorated Black liberation movement can be sustained.

Let us not forget that assessing our strength is about more than how many of us can come together, despite racialized capitalism and state-sponsored programs designed to keep us disorganized and in disarray. Our strength lies in how well we take care of one another when the cameras are gone, when the buzz has died down and when the trending on social media ends.

Today, we should be proud of the Movement for Black Lives and all who have contributed to it. And as we celebrate, let us renew our commitment to strengthening the activists, protestors, organizers and institutions that make this movement possible. If we are successful, as hip hop artist Kendrick Lamar so eloquently said, “We gon’ be alright.”