Arrested To Show Senator Collins What We Think Of Tax Bill

Being arrested in Collins’s office didn’t scare us. But the tax plan she says she’ll vote for does.

Last week, in the midst of congressional debate on the Republicans’ disastrous tax plan, we went to Senator Susan Collins’ office in Bangor to join the discussion and talk about how the bill will impact people like us.

Looking to have a constructive conversation about her vote on the Senate’s version of the tax plan, we were met with the stale talking points that Republicans around the country are repeating in uniformity — so we stayed until we could speak directly with Senator Collins on the phone or in person to get real answers, until our concerns were heard.

We wanted her to agree to oppose the bill, and refused to leave her office until we got a commitment that she would. She would not, and when we would not leave, we were arrested and taken to the Penobscot County Jail for criminal trespassing.

While we knew we were taking a risk by being handcuffed by law enforcement and escorted out of her office, what scares us more, what keeps each of us up at night, are the consequences of the tax bill she helped push through Congress.

Maine has an aging population, so the $400 billion in cuts to Medicare over the next ten years and cuts to Medicaid in a state with a per capita income of approximately $44,000 would be devastating to a large portion of the state and it’s most vulnerable. 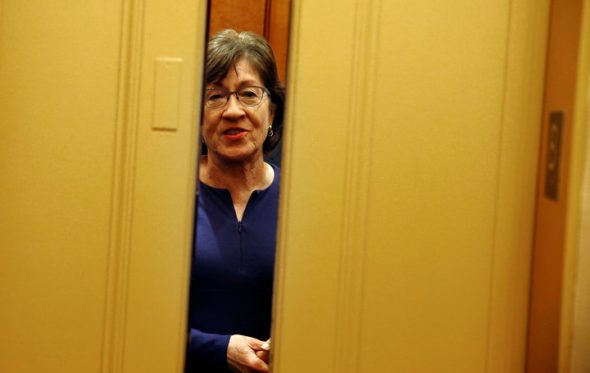 We know first hand that this bill will hurt us, our families, and our community.

One of us, Jim, is a retired state worker and a veteran. He and his wife depend on Medicare to treat their serious health conditions and stay well. They are truly worried about what these massive cuts to Medicare will mean for seniors like them.

Another of us, Erin, is a registered nurse at the local hospital. She knows this bill will hurt her patients by raising premiums, eliminating health care for thousands of people, and taking money out of Medicare. She came to Senator Collins for help. As a mother of four, she and her husband, a firefighter, know they won’t be able to pay for college for their kids.

Nick is an electrician, and knows that this bill does nothing for people like him. He has four kids, and wants to think about their future. He felt that this was one small thing he could do to make his voice hears.

Tina never considered herself an activist. She was a successful Senior Software Designer for a large corporation and a prior Army Reservist. After becoming disabled, she depends on Social Security Disability and on reliable affordable health care without which she would eventually be homeless and dangerously ill. She knew she had to do whatever she could to convince Senator Collins to vote no. Her life depends on it.

The mechanisms of democracy are broken, and we felt we had no choice but to do something to get her attention.

We have tried calling. We have tried writing. We have tried emailing, and visiting her offices. Yet, nothing seems to be getting through to Senator Collins. The mechanisms of democracy are broken, and we felt we had no choice but to do something to get her attention. A vast majority of her constituents oppose this bill, yet she turned her back on us and voted for it.

Senator Collins has been working to gain support for amendments and side agreements in exchange for her support for the bill. But we know there is no fixing a bill that takes a rigged economy and makes it worse by giving 62 percent of the benefits to the bill to the 1 percent of the wealthiest Americans.

As health care voters, we won’t stand for a plan that will undermine our health care, our financial well-being, or our future. There should be not another penny in tax cuts for the rich at the expense of hard working people just trying to get by.

With Congress set to vote again this week, we call on Senator Collins to change her vote and oppose this terrible bill.

As our representative, Senator Collins has a responsibility to take action herself, voice her opposition to the reconciled bill, and vote against a tax plan that will do untold harm to her constituents. Our lives — and her job — depend upon her listening to our pleas. Help us convince her to do the right thing.