We Have 12 Years To Stop Climate Catastrophe. These Young Activists Have A Plan.

Above Photo: NIKLAS HALLE’N VIA GETTY IMAGES. Environmental activists gather in Parliament Square, London, the U.K., during a demonstration organised by the movement Extinction Rebellion on Nov. 24, 2018.

There has been a vibrant climate justice movement that has been growing in the United States for year. We have been covering and participating in pipeline blockades, divestment campaigns, protests against the Federal Energy Regulatory Commission, export terminals and more. We’ve also been covering the Sunrise Movement for more than a year and the Extinction Rebellion since it began in the UK (as well as other climate protest campaigns in the UK before it.) Recent reports on the climate crisis as well as storms, fires, droughts and other impacts are fueling more protest. The power structure resists confronting climate change, if that continues, the protests will grow, sadly along with the impacts of climate change. KZ

In the wake of the stark U.N. report, direct-action groups like Sunrise Movement and Extinction Rebellion are out to disrupt the fossil fuel economy.

On a clear and sunny morning in San Francisco’s downtown SoMa district, 40 people stand side by side with interlinked arms blocking the entrance to the San Francisco Federal Building. Just a couple of weeks ago this city was shrouded in a suffocating blanket of wildfire smoke that had traveled down from giant blazes in the north. But the haze has since cleared, and its absence has revealed a clarity of vision which stretches far beyond a healthier air quality index.

“I’m here today because we have a 12-year deadline,” Lydia Macy, 18, told HuffPost from behind a 40-foot banner that she was helping to hold up. “Climate change is the No. 1 issue that we’re facing in the 21st century, and if we don’t fight we won’t have a world to live in.”

A student at Berkeley High School, Macy was joined by hundreds of others in this action organized by the Bay Area chapter of Sunrise Movement — a youth-led organization with the mission to stop climate change and create millions of good jobs in the process. Sunrise Movement’s most recent campaign has been focused on putting pressure on members of Congress to support Rep.-elect Alexandria Ocasio-Cortez (D-N.Y.) in pushing for a Green New Deal, a policy proposal aiming to ensure a just and rapid transition to a decarbonized economy.

Following a day of sit-ins and protests on Monday outside the Capitol Hill office of House Minority Leader Nancy Pelosi (D-Calif.) — which drew in thousands and saw more than 130 arrested — the action in San Francisco on Tuesday also targeted Pelosi, whose local district office was just on the other side of the demonstrators’ human barricade. 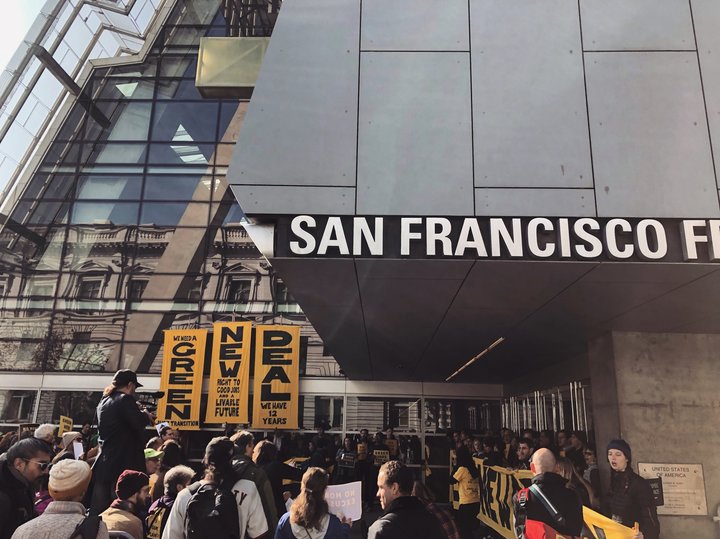 Pelosi, likely the next Speaker of the House, will be in charge of shaping the House legislative agenda for the next two years. She has not yet endorsed Ocasio-Cortez’s proposal to form a select committee that would take up the Green New Deal.

“I took the day off of high school because the science is here and the solutions are clear,” Macy said. “The only thing standing in the way is politics and the people in power.”

Macy is part of a growing climate movement which has been occupying forests, shutting down oil pipelines, disrupting fossil fuel conferences, and taking part in many similar forms of civil disobedience and direct action.

This movement is filled with young people who don’t see much of a future if we continue on with business as usual. They say they’re done asking politely and are no longer willing to accept the inaction, ineptitude and corruption that pervade the corridors of power. They are willing to put their bodies upon the gears, the wheels and the levers of the carbon economy — and they have very good reasons for it. 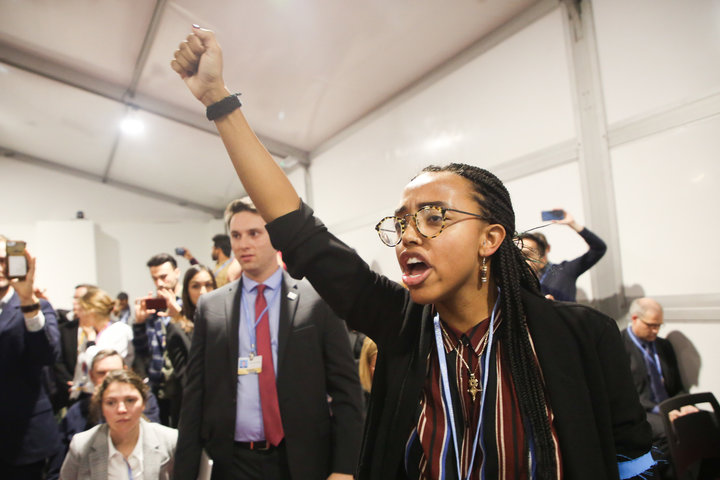 Demonstrators erupted at COP24 after Wells Griffith said the US will not be rejecting coal mining or fossil fuel use. Katowice, Poland on 10 December, 2018. (Photo by Beata Zawrzel/NurPhoto via Getty Images)

The recent report by the UN Intergovernmental Panel on Climate Change (IPCC) sent a psychological shockwave across the planet. We have only 12 years left, its authors warned, to enact ”rapid, far-reaching and unprecedented changes in all aspects of society″ in order to prevent a full-blown climate catastrophe. That’s 12 years to avoid entering into an unknown and unprecedented era marked by severe and regular drought, flooding, hurricanes, extreme temperatures, mass dislocation and death, economic collapse, and an acceleration of what we now know to be the Earth’s sixth mass extinction.

The report may have left many curled up into a quivering ball of despair — if not physically, then at least emotionally. The end of the world is a profoundly moving and yet paralyzing proposition to comprehend. But of course there are many communities across the globe that are already well aware of the effects of climate change. You don’t have to warn the residents of Puerto Rico, the Marshall Islands, or the recently incinerated northern California town of Paradise, for example, about the impending climate catastrophe. 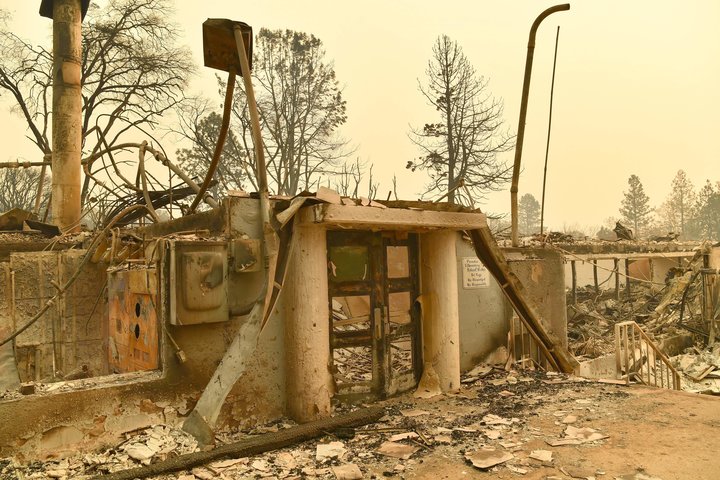 Paradise Elementary School is seen after burning down during the Camp fire in Paradise, California on November 12, 2018. – Thousands of firefighters spent a fifth day digging battle lines to contain California’s worst ever wildfire as the wind-whipped flames cleaved a merciless path through the state’s northern hills, leaving death and devastation in their wake. The Camp Fire — in the foothills of the Sierra Nevada mountains north of Sacramento — has killed 29 people, matching the state’s deadliest ever brush blaze 85 years ago. More than 200 people are still unaccounted for, according to officials. (Photo by Josh Edelson / AFP) (Photo credit should read JOSH EDELSON/AFP/Getty Images)

And yet the scale and scope of the IPCC’s findings bring us all into the fold. Perhaps not unlike Al Gore’s jaw-dropping emissions chart in “An Inconvenient Truth,” the report seems to have hit a collective nerve. It’s a line in the sand. A point of no return. A warning with apocalyptic implication.

“It feels like our future is truly being held in the balance and that I don’t really have a choice anymore,” Isaac Silk, a 26-year-old volunteer with Sunrise Movement’s Bay Area chapter, told HuffPost. “Once you accept the truth of this moment into your heart, there’s no going back.”

Sunrise Movement is just one of many organizations channeling the growing movement of youth-driven climate civil disobedience. In the United Kingdom, a group calling themselves Extinction Rebellion has been organizing giant swarms around cities like London and putting together flash mobs that disrupt traffic at high-profile spots. Their aim is to put pressure on those in power and increase the public’s awareness of climate change by disrupting the material flows of the U.K. economy.

Larch Maxey is a coordinator with Extinction Rebellion in London. He’s a veteran of the climate justice movement and helped to organize the group’s recent Rebellion Day on Nov. 17. The day of mass civil disobedience drew in around 6,000 people, according to the group, and shut down five major bridges in London.

“Nonviolent direct action with a mass movement behind it is the best opportunity we’ve got at this point,” Maxey told HuffPost. “We’ve tried many things over the last few decades — marches, petitions, academic papers, reports — I’ve personally tried all of those. But I don’t hold a lot of hope for those processes anymore.”

Extinction Rebellion has declared open rebellion against the U.K. Parliament because they believe the social contract had been broken. Their proclamation has resonated with tens of thousands of people all across the U.K. Maxey refers to a 17-year-old called Jack who took part in November’s mass disruption.

“He just turned up and swarmed with us,” Maxey said. “The second day, he led a swarm. The third day, he was coordinating his own roadblock.” He says Jack’s story is similar to many others who have recently joined Extinction Rebellion.

“It’s really refreshing that you’ve not got all the baggage that you’ve often got with the old guard,” Maxey said, laughing. “That’s not to say some of us old codgers aren’t useful and bringing value to it — but I think it’s really important that we are all equals in this movement.”

Extinction Rebellion is currently working to launch chapters across the globe, including in the United States, where the brand new San Francisco Bay Area chapter is just getting off the ground.

Russell Gray, 24, is the full-time coordinator for Extinction Rebellion U.S. He helped to coordinate the group’s Declaration of Rebellion action earlier this month on Capitol Hill, and has been working with organizers like Zack Exley — a senior adviser for Bernie Sanders’ 2016 campaign — to help establish new chapters forming all across the U.S.

“Our biggest priority right now is growth,” Gray told HuffPost. “We’re just trying to establish chapters in as many areas as we can and it’s exciting because we’re getting a lot of interest from both urban and rural areas — major coastal cities but also places like Montana and Wyoming.”

Extinction Rebellion U.S. is currently coordinating a national day of action for Jan. 26 that will consist of mass disruptions. They are hoping to take advantage of their increasing momentum to mobilize as many people as possible.

“We have to disrupt the whole system,” Gray told HuffPost. “And if we are to avert runaway warming it’s going to be because of a social movement. There’s no other place that that power can be marshaled to successfully overcome the power of profit and capital.”

Currently only two countries have made commitments or efforts that would achieve the Paris accord’s goal of keeping warming below 1.5 degrees Celsius. In fact, according to The Climate Action Tracker project, the United States itself is on track for over 4 degrees of warming. And with the confirmation that the COP24 conference in Katowice, Poland, has refused to adopt the IPCC’s most recent report, it’s never been more clear that change is not going to come from above.