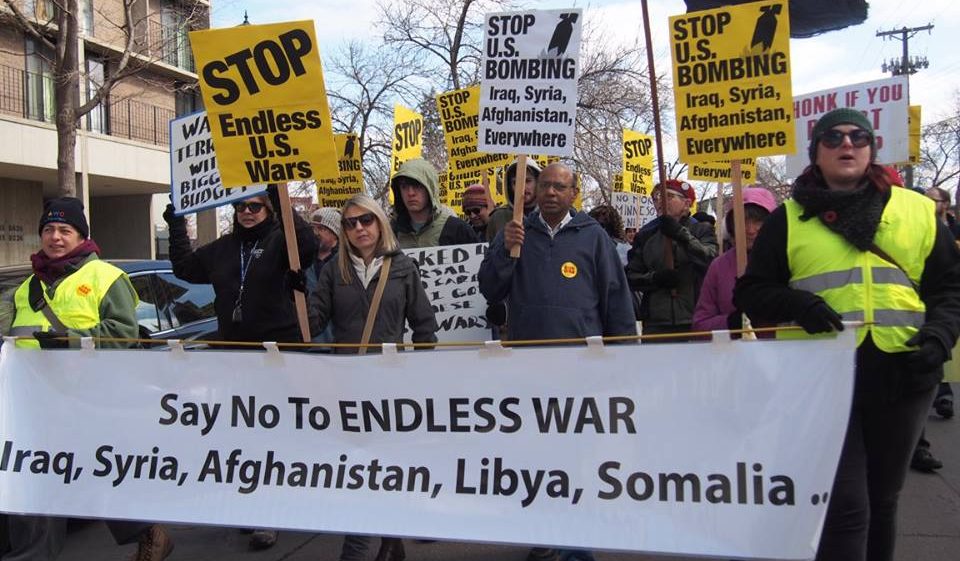 We Must Stop Our Nation’s Push For Relentless War

Above photo: From the Anti War Committee.

Join the People’s Mobilization to Stop the US War Machine (and Save the Planet) September 20 to 23 in New York City. Click here for more information.

As if to prove Carter’s assertion, Vice President Mike Pence told the most recent graduating class at West Point that it “is a virtual certainty that you will fight on a battlefield for America at some point in your life. . . . You will lead soldiers in combat. It will happen.” Clearly referring to Venezuela, Pence continued, “Some of you may even be called upon to serve in this hemisphere.” In other words, Pence declared, war is inevitable, a certainty for this country.

Moreover, it was recently reported that the Pentagon is preparing for war against both Russia and China, even as Trump and his henchmen are openly threatening war against Iran and Venezuela, doubling down on the nearly 20-year war in Afghanistan, and aiding and abetting Saudi Arabia in its genocidal war in Yemen. One might think, and certainly hope, that there would be a massive outcry against what appears to be the imminent threat of another world war.

And yet, this threat has been met with near total silence. Indeed, to the extent that the mainstream media have reacted at all to Trump’s war plans, the reaction has been disappointment that Trump is not moving quickly enough toward military aggression. One example was a May 11 New York Times piece, “Trump Said He Would Tame Rogue Nations. Now They Are Challenging Him” — a piece which essentially goaded Trump into using military force against North Korea, Iran, and Venezuela.

Listen to our interview with Dan Kovalik about his new book, “The Plot to Overthrow Venezuela,” written with Oliver Stone on Clearing the FOG.

What the Times and other press sources fail to recognize is that it is the United States that is the rogue state by any true measure. And this truth is not lost on the citizens of the world who, in two global polls, ranked the United States as the greatest threat to world peace.

In the meantime, the promised and desperately needed infrastructure overhaul in this country is barely mentioned anymore; tent cities sheltering the homeless are rising up in nearly every major US city; nearly half of Americans cannot afford basic necessities; and basic health care is still out of reach of millions of Americans.

The mammoth elephant in the room is the insatiable military-industrial complex, which is diverting precious resources away from these causes and toward the cause of destroying other nations. Meanwhile, the US war machine is arguably the greatest contributor in the world to the global warming crisis. And, as a symbol of its environmental threat, the US military just opened an airstrip in the Galapagos Islands.

As the 2020 presidential campaigns begin, it is baffling to witness that none of this is a matter of debate. The one candidate who is willing to broach this subject — military veteran Tulsi Gabbard — is vilified and ridiculed as a result. And yet, don’t people realize that there will be no “Green New Deal,” or “Medicare for All,” or other such laudable social programs as long as we continue down our unending path of war? Indeed, the United States just made history this year by experiencing a historically high increase in the deficit during good economic times, and this is because we are now engaged in deficit spending on war instead of meeting human want.

In the end, the greatest single thing we can do, both for ourselves and for the world, is to stop the United States from starting its next war, while demanding that it end the wars it has already started. We must demand that our government stop putting resources into war and destruction and instead put those resources toward building, meeting human needs, and saving our environment. This will require the rebuilding of the US peace movement, which once helped stop the war in Vietnam and the US war on Central America, and which mobilized record numbers of people in opposing the invasion of Iraq in 2003. Such a peace movement is needed now more than ever, and it is literally a matter of life and death.

Oliver Stone is an Academy Award-winning filmmaker and author. Dan Kovalik teaches international human rights at the University of Pittsburgh School of Law. They both contributed to the new book “The Plot to Overthrow Venezuela: How The US is Orchestrating a Coup for Oil.”