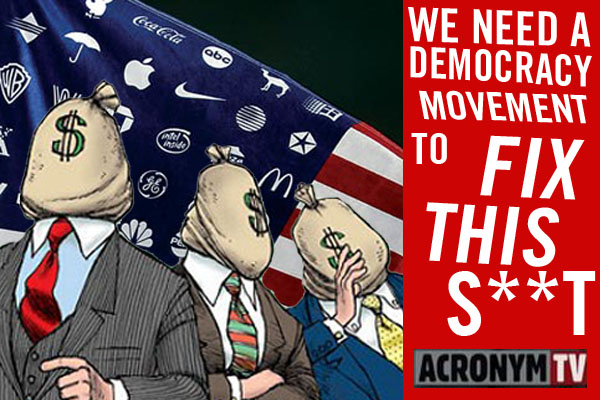 We Need A Democracy Movement To Fix This Sh*t (video)

As the late populist and journalist Molly Ivins once said: “It is possible to read the history of this country as one long struggle to extend the liberties established in our Constitution to everyone in America.”

Extending those liberties and constitutional protections to corporations is antithetical to the principles of Democracy. While the Supreme Court has been slowly granting rights of persons to corporation for over 100 years, the phrase “Corporate Personhood” entered the popular lexicon soon after the January 21, 2010 Citizens United v. FEC Supreme Court Case.

The group Move To Amend saw the Citizens United decision coming, and formed in the fall of 2009.

When I began working with  Move To Amend on the documentary we ended up calling Legalize Democracy (which will premiere on Free Speech TV January 21st at 9pm), I was outraged by this concept, still newly minted in my brain, of corporate personhood.

Growing up in these United States of America, we were taught that we had hit the “where-were-you-born?” lotto jackpot; that the United States of America was operating with the greatest form of government in the world. After all,  if “We the people” rule and our government failed to serve the greater good, well, then our representative form of democracy enabled us to simply vote in representatives who would act in our better interests.

That seems great in theory, but in practice it is a lie.

At the time of Constitution was ratified, “we the people”, did not include the overwhelming majority of the PEOPLE.

We the people did not include women.

It did not include men who did not own property.

It did not include the Native population, who were living on the land we call the United States long before the founding fathers committed genocide against them and justified it under the perverse notion we still teach our schoolchildren called Manifest Destiny.

It would not, until very recently, include the people brought here in shackles, and upon whose backs the wealth and power of this nation were built.

In fact, “we the people”, when this country was founded only meant about 5% of the population.

For these reasons, and more, I believe that we need a Democracy Movement to fix this shit!, and that is what Move To Amend is: a single campaign within a larger  Democracy movement. Our work won’t end after we bring about an amendment to the constitution that clearly states that corporations are not people and that money does not equal political speech.