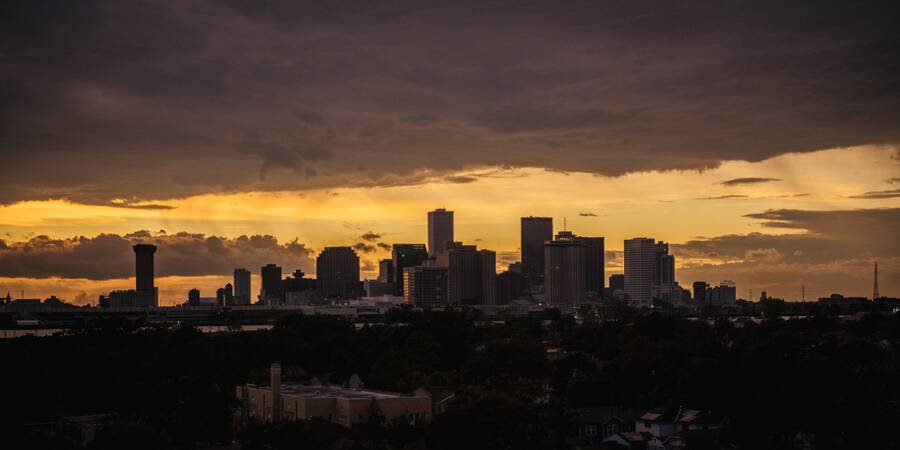 We Need Public Control Of Our Energy Systems

The Power Is Still Out In New Orleans After Hurricane Ida.

The Damage From Hurricane Ida Is The Latest Reminder That The Climate Change Era Requires Public Ownership Of Infrastructure.

On Sunday August 29, New Orleans and neighboring areas were hit by Hurricane Ida, one of the strongest storms to make landfall in Louisiana’s history. The rebuilt levy system in the city held, preventing the large-scale flooding wrought by Hurricane Katrina in 2005. Yet the damage caused by Ida has been “catastrophic,” according to Louisiana Gov. John Bel Edwards. This includes the total collapse of the city’s privately-owned electric grid, leaving the predominately Black city, which was already reeling from the Covid-19 pandemic, completely without electricity.

All told, more than one million people in the region lost power during Hurricane Ida, and Entergy — the Fortune 500 corporation that owns and operates New Orleans’ grid — has warned that service in some areas might not be restored for weeks. As a result of this grid failure, water and sewer facilities were knocked off-line (leading to water outages and boil water advisories), schools and universities have been shuttered, and communications services have been badly interrupted.

When natural disasters like Hurricane Ida occur, policymakers often wave away the damage and devastation as an unavoidable “act of god” (to use common insurance language). However, these types of response ignore deep structural deficiencies and inequities in the way critical infrastructure systems are often designed and operated in the United States. Specifically, they obscure the role of private, for-profit ownership and control of these services.

In the case of New Orleans’ electric grid, for instance, Entergy has long been accused of neglect, poor maintenance and manipulative business practices in the pursuit of profit. In 2019, advisers to the New Orleans City Council recommended fining the company up to $2 million for failing to maintain the city’s aging transmission system, concluding that the company’s “actions, inactions and delayed reactions caused adverse impacts on tens of thousands of ratepayers, both commercial and residential.”

Earlier that same year, the City Council fined the company $5 million for using paid actors to pose as supportive residents during council hearings on a proposed new power plant in New Orleans East. And in March of this year, the Louisiana Public Service Commission, the Arkansas Public Service Commission, and the New Orleans City Council filed a federal complaint against Entergy asserting that the company overcharged (and should refund) customers to the tune of $1.1 billion related to its shoddy attempts to refurbish the Grand Gulf Nuclear Station in 2012.

While these types of issues are endemic to privatization and for-profit ownership and control, the era of climate change is bringing them into stark relief. Last year, for instance, the large California for-profit utility Pacific Gas & Electric (PG&E) pled guilty to 84 counts of involuntary manslaughter in conjunction with the devastating 2018 “Camp Fire,” which was caused by a combination of climate-related drought conditions and profit-seeking corporate malfeasance. Prior to the plea, a grand jury report found that the company had failed to maintain and upgrade its aging power lines (one of which started the fire) despite multiple warnings to do so. At the same time, the company was spending millions of dollars lobbying state officials, and had distributed $4.5 billion in profits to shareholders over just five years.

Similarly, in February 2021, Texas’ highly privatized and marketized energy system totally failed under pressure from stronger than usual winter weather. As in New Orleans, the resulting effects from climate change fueled the disaster, which disproportionately and inequitably impacted communities of color and low-wealth people. For its part, Entergy has a long track record of bitterly opposing any efforts to address climate change (despite knowing about it since the 1980s).

There is an alternative to this extractive, ecologically unsustainable, and racially and economically inequitable model of private control over our vital infrastructure: public ownership. In the electricity sector, for instance, roughly 28 percent of customers in the United States already get their power from a publicly owned utility or cooperative. These locally controlled, not-for-profit entities often charge significantly lower rates for electricity than their for-profit counterparts and, in the case of publicly owned utilities, return a greater percentage of their revenue back to the local community.

They also do not have the same incentives (namely short-term profits) to defer maintenance, reduce service quality, and fail to invest in climate resiliency. For instance, on repeated occasions over the past several years, Sacramento’s publicly owned electric utility, Sacramento Municipal Utility District (SMUD), has kept power on for their customers during heat waves and wildfires, while, nearby, PG&E was cutting off power for millions of customers under orders from the California Independent System Operator, which supports the three large, for-profit utilities in the state. Part of the reason SMUD is able to do this when for-profit utilities cannot is that, rather than squeezing out as much profit as possible, they have chosen to invest in mitigation and reliability measures.

Public ownership of infrastructure and services is not a guarantee of more equitable, democratic and ecologically sustainable outcomes. For instance, while publicly owned utilities in general generate significantly more of their energy from renewable sources than for-profit utilities (mostly due to high concentrations of hydropower), many have a long way to go in transitioning to renewable forms of energy. Similarly, many publicly-owned enterprises and services are severely lacking when it comes to genuine participation, transparency and accountability to democratic structures.

However, what public ownership and control does provide is an opportunity and a tool for communities at various scales to democratically and collectively determine and implement priorities, goals, and timelines — such as climate resiliency, a just energy transition, and an equitable recovery from crises — that go beyond a single-minded pursuit of short-term profits. It is an opportunity that simply does not exist with for-profit, fossil-fuel addicted corporations in control. At a briefing to discuss the difficulty of restoring power after Hurricane Ida, President Biden neatly and unknowingly summarized the problem. “They’re all private providers,” he said. “We don’t control that.”

From hurricanes and polar vortexes to wildfires and pandemics, recent events across the country demonstrate that decades of privatization, corporatization and marketization have left our communities — especially those most marginalized and under-resourced — fragile and highly vulnerable to disasters. As we enter into what is likely going to be a period of increasing and intersecting economic, ecological and social crises, it is imperative that we reclaim democratic public ownership and control over our infrastructure and vital public services.