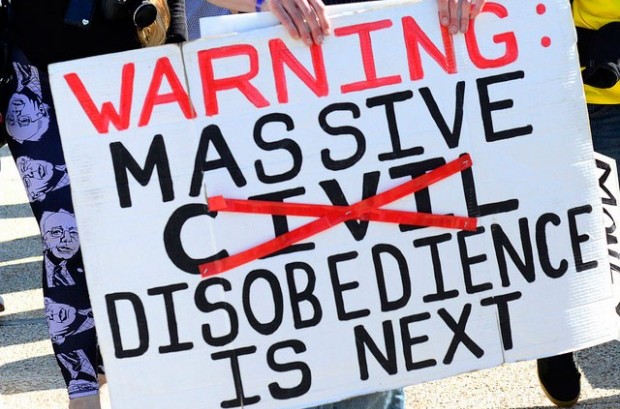 We Need To Consciously Spark, Amplify And Harness Mass Protest

Above Photo: A protester holds a sign at the Democracy Spring demonstration in Washington, DC, on April 13, 2016. According to Mark and Paul Engler, momentum­-driven organizing uses the tools of civil resistance to consciously spark, amplify and harness mass protest. (Photo: Stephen Melkisethian)

The following excerpt is the conclusion to This Is An Uprising:

By 1963, the Dorchester retreat center near Savannah, Georgia, had emerged as a buzzing hub of activity for the civil rights movement in the American South. The site where Project C was hatched was also the home of a thriving social movement ecology.

With the help of veteran organizers at the Highlander Folk School, the Southern Christian Leadership Conference had renovated the facilities at a former missionary school located just a few miles off Georgia’s Atlantic coast. Starting in 1961, the SCLC used the Dorchester center, nestled in a campus lined with moss-covered oaks, for a regular series of “citizenship schools” run by Dorothy Cotton and Septima Clark. When these educators brought in adult students from communities throughout the South for weeklong trainings, their method was rooted in the person-to-person leadership development of structure-based organizing. After a week of intensive courses, local activists were prepared to go home to run trainings in democratic rights and resistance techniques in their own towns and cities. The trainees, including such storied leaders as Fannie Lou Hamer, helped to create an infrastructure for a slow-and-steady building toward racial justice.

These elements of long-term community organizing blended with a prefigurative vision of what America could become. Civil rights activists brought people together across boundaries of race, class, age, and educational attainment. And in doing this, they modeled the relationships of an integrated society in their own movement. They bound people together in a spirit of awakening and determination, and they reinforced their community through the sharing of freedom songs. One of the Dorchester trainees, Bernice Johnson Reagon, would later go on to be a central force in preserving the movement’s music, through her group Sweet Honey in the Rock.

Finally, Dorchester was a place where strategies of engineered revolt were drafted and refined. In September 1963, King’s inner circle returned to the retreat center to reflect once again on the state of their movement. Having experienced a remarkable victory in Birmingham four months before, they watched protests erupt throughout the South over the summer, revolts that were inspired by the success of Project C. At the September retreat, Wyatt Walker made a presentation that he called “How to Crack a Hard Core City.” It represented a codification of the lessons that SCLC had learned in its experiments in nonviolent escalation, and it outlined key elements needed for a successful campaign.

In the blueprint Walker presented, “Planning in detail” was one important prerequisite; another was building tension “so great that a crisis be created.” The two went hand in hand.

“Spontaneous.” “Unplanned.” “Uncontrolled.” “Emotional.” When an outbreak of mass unrest captures the public spotlight, the media reaction is remarkably consistent. But those who gathered at Dorchester saw things differently. The suggestion of Walker’s presentation was that the public crises that are critical in propelling change do not burst forth randomly. Rather, his talk proposed that unarmed uprising involved skills that could both be mastered by experienced practitioners and taught to new ones.

Saul Alinsky argued there “are no rules for revolution any more than there are rules for love or rules for happiness, but . . . there are certain central concepts of action in human politics that operate regardless of the scene or the time. To know these is basic to a pragmatic attack on the system.” Within his tradition of community organizing, generations of advocates have worked to record and refine these concepts. They have created a strong base of knowledge about the processes of building structured groups made up of people who, by themselves, have little power, but who together can effectively push for justice.

Following the example of Dorchester, the lineage of civil resistance has endeavored to do the same for a different mode of resistance. It has worked to fashion an ever-deeper understanding of the art of unarmed revolt. Breaking from earlier traditions of moral pacifism, its adherents have taken a most impractical idea — one previously associated merely with lofty ideals of peace and compassion — and they have demonstrated how it can have the most profound of practical impacts.

Along the way, a variety of key lessons have emerged. Momentum-driven organizing uses the tools of civil resistance to consciously spark, amplify, and harness mass protest. It highlights the importance of hybrid organizations, such as Otpor and SCLC, which can build decentralized networks to sustain protest mobilizations through multiple waves of activity. It goes beyond transactional goals by also advancing a transformational agenda, and it wins by swaying public opinion and pulling the pillars of support. It is attentive to the symbolic properties of campaigns, showing how these can sometimes be just as important as instrumental demands, if not more so. It uses disruption, sacrifice, and escalation to build tension and bring overlooked issues into the public spotlight. It aspires, at its peak, to create moments of the whirlwind, when outbreaks of decentralized action extend far outside the institutional limits of any one organization. It is willing to polarize public opinion and risk controversy with bold protests, but it maintains nonviolent discipline to ensure that it does not undermine broad-based support for its cause. And it is conscious of the need to work with other organizing traditions in order to institutionalize gains and foster alternative communities that can sustain resistance over the long term.

In advancing all of these ideas, momentum-driven organizing contends that the study of mass mobilization has been too often neglected and that reversing this neglect can be essential to the success of future social movements in the United States and beyond. Many different kinds of activity are needed for citizens to provoke, secure, and sustain social progress. The point of momentum-driven organizing is not to deny the contributions of other approaches. But it is to suggest a simple and urgent idea: that uprising can be a craft, and that this craft can change our world.

Those who practice it tell us that outbreaks of widespread disruption, although commonly misunderstood, are neither flukes nor fleeting failures. Rather, they are forces that can be guided with the exercise of conscious and careful effort. Indeed, if the growing legion of these practitioners is right, few forces will have as significant a role in shaping the contours of public life in the years to come.