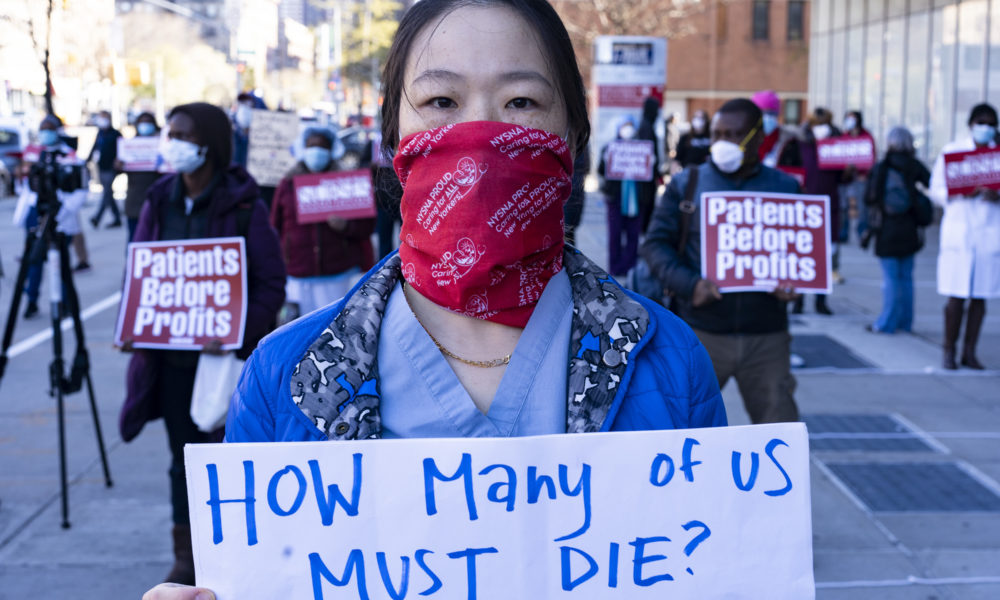 Our for-profit healthcare system was already broken before the pandemic.

Now it has proved to be awfully inadequate to respond to the crisis. The only rational solution is to nationalize all hospitals and health-related industries.

Plenty has been written about the critical condition of the healthcare system. The response to the pandemic has been faulty at best, and the resources mobilized are falling dramatically short of what is needed. Personal protective equipment (PPE) is so scarce that nurses and other healthcare workers are protesting across the country, because working without appropriate PPE is resulting in high rates of infections and deaths.

The media has been reporting on a national dearth of ventilators since the outbreak began. The New York state government has been scrambling to acquire the 30,000 ventilators that are going to be needed at the peak, according to estimates. Despite Donald Trump’s boasting about invoking the Defense Production Act, we are now at the peak of the pandemic, and the companies that were supposed to be retooled to churn out thousands of ventilators, like GM and Tesla, have produced a total of zero devices. Meanwhile, price gouging has taken a new dimension, with ventilator companies racking up the prices from $25,000 to $45,000 as state governments bid against each other to buy the units.

As the number of patients with COVID-19 skyrockets, the number of healthcare personnel available to assist them becomes more and more insufficient. And since they are working without appropriate protection, they too get sick, and many of them die, leaving the healthcare workforce even less equipped to face the pandemic.

How Did We Get Here?

A fragmented, extremely commodified healthcare system such as the one in the United States, with 30 million people uninsured and many more millions underinsured, is woefully inadequate to marshal the resources to contain a pandemic and provide care to all.

Insufficient staffing ratios have been pervasive for a long time in U.S. hospitals, particularly in New York. Last year, nurses almost went on strike at the five biggest hospitals in New York City because management would not budge on nurses’ demand for safe staffing ratios. The overburden of patients per nurse has dramatically increased during the pandemic. And the reason why hospitals don’t hire enough nurses is simple: to cut down costs as much as possible. In a healthcare system that is organized primarily to allow corporations to make profits out of sick people, this problem is inevitable.

If anything characterizes the U.S. healthcare system, it’s the abundance of middlemen. Insurance companies are probably the most well known, but there are also pharmacy benefits managers (PBMs), hospital consultants, supplies distributors, and so on. Everyone gets a cut. And all of these intermediaries, as well as the drug industry, device manufacturers, and all other businesses in health care, operate under the same principle of maximizing profits.

So when the demand for ventilators goes up, companies will increase the price — simply because under these conditions, they can do so and still sell all of their stock. Private hospitals, concerned about their own bottomline, reportedly are dragging their feet to buy new ventilators — many of which they may not need in the future.

In the meantime, the White House claims to be coordinating efforts to meet the demand for PPE and other urgently needed equipment, but that is far from the truth. The federal government is actually handing over all supplies to a handful of private distributors, who in turn have the bargaining power to charge ridiculous prices for masks, gloves, gowns, and other protective materials. This has been graphically described by governors as “bidding in our own eBay” for the equipment that is desperately needed in the hospitals.

In order to coordinate a national response to the crisis, ensuring that hospitals are adequately staffed, receive enough supplies and equipment, and have enough beds in clinical care and ICUs, we need nothing less than the nationalization of the healthcare system. Until one or two months ago, Medicare for All, or a single-payer system, was a radical demand. This is a system where insurance companies are eliminated, and there is only one, nationally-run health insurance that covers all citizens and negotiates with all hospitals, providers, drug companies, etc.

Since the onset of the pandemic, however, the new reality has proved that we have to go even further. Under a Medicare for All system, the delivery of healthcare would still be primarily in the hands of private hospitals and pharmaceutical companies, since the government would still be negotiating with the private sector. The National Health Service (NHS) in the United Kingdom is another example of a system in which the government pays for services, but unlike “Medicare for All,” in this system of socialized care, the government also owns most of the hospitals and employs the doctors directly.

The private hospital system in the U.S. is uncoordinated and notorious for price-gouging inpatient services. In the current moment, we need a nationalized network of hospitals to organize care for everyone who needs it, regardless of their ability to pay. Under a large-scale program of nationalizations, we would also nationalize our private hospital systems, as Ireland and Spain have recently done — but only temporarily, for the duration of the crisis. If we truly envision a system that does not allow wealthy corporations to profit at the expense of the sick and the vulnerable, however, then all health-related industries like hospitals should remain nationalized after the crisis has passed.

Beyond the hospital system alone, a truly nationalized system of health care would strike at the structural bases of capitalism by bringing all health-related industries under workers’ control to produce ventilators, masks, hand sanitizer, gloves, and other materials needed to stop the spread of viruses in the midst of deadly pandemics and guarantee their free distribution for the safety of frontline workers. The scarcity of these products in the face of a catastrophe only highlights the irrationality of the current system and the need for a planned economy for the health sector in which workers make decisions on how these critical supplies are produced and distributed.

We need to nationalize each piece of production to ensure that everything from ventilators and PPE to infrastructure and services needed for a broad health system are manufactured in adequate numbers and at the cost of production — not for profit. Here in the United States, we have a large industrial sector that can be put at the service of society. Yet the car factories, well-equipped to manufacture ventilators yet sitting idle, will only produce what’s needed for our health system if industrial capacities are centralized and workers are at the helm of deciding how they are used.

In this kind of healthcare system, governments would not rely on the private insurance industry to provide care. Democratic control by healthcare workers — the people who have every interest in saving lives and promoting health — would rule supreme. To achieve measures like these, workers cannot rely on the Trump administration and the bipartisan consensus in Congress, who are primarily concerned with maintaining prospects of profit — especially in the healthcare industry, which represents almost 20% of the U.S. GDP. Only the working class organized in their workplaces will be able to impose a system that is at its heart concerned with the interests of working class and oppressed people. This is why, in this context, workers’ control becomes key.

In Argentina, workers are showing us how this can be done. Worker-controlled factories without bosses across the country are beginning to produce for need instead of greed. Madygraf, a worker-controlled printing plant, recently put their factory at the service of the health systems by producing thousands of liters of sanitizer and hundreds of masks per day.

Workers’ control of nationalized industry would extend to all large sectors that deal with our health, including one of the most voracious sectors — the pharmaceutical industry.

As the coronavirus crisis puts a spotlight on the extent to which capitalists endanger our lives to increase their profits, nationalizing the highly profitable pharmaceutical industry as well as the medical device industry (diagnostic and therapeutic) is particularly important.

The U.S. lacks basic price controls for drug pricing, giving drug companies the ability to set exorbitant prices for drugs that cost cents to produce. At the same time, federal perks allow Big Pharma to receive substantial government assistance in the form of publicly funded basic research and major tax breaks. A coronavirus spending package signed in early March reinforces this model in the form of concessions given to the pharmaceutical industry. Specific language drawn up by industry lobbyists prevents the government from delaying a medicine’s development over concerns about its affordability. It’s no surprise that the outbreak of the coronavirus crisis has caused the shares of pharmaceutical companies to skyrocket.

A nationalized pharmaceutical industry would mean that research and production would be directed toward what is most needed, not what is most profitable. The working class needs a more rational system free of capitalist-engineered epidemics like the opioid epidemic — a system in which billions are not wasted in marketing costs, and drugs are sold at the cost of production.

Along with Big Pharma, large laboratories and the greater biotech industry will take advantage of any crisis to expand their businesses. In the face of this emergency situation, we cannot allow the quest for a coronavirus vaccine to become another barbaric example of putting profits before the public good. The solution is to nationalize these companies and put them under the democratic control of their workers.

Our current healthcare system is inefficient and chaotic, driven by the thirst for profit rather than the needs of working people. What we need instead is a system in which profit-driven medical care is dismantled entirely. The public health crisis we are currently facing makes this need more evident now than ever. Nationalization of all health-related industries, including the parts of production, the private hospitals, and the pharmaceutical industry, under a planned economy with workers’ control is essential toward achieving our goal of a health system put toward the collective needs of society.

As frontline workers and other so-called “essential” workers demonstrate across the country and unite in demanding access to PPE in the lead-up to a rank-and-file organized National Day of Action, calls for nationalization from healthcare workers, factory workers, and other workers who play an indispensable role in this crisis can advance a working-class alternative to our current system.

At the same time, self-organized workers committees like the recently formed COVID-19 Task Force at Mt. Sinai in New York are examples that workers are the only ones who can and should be in charge of deciding when it’s safe to work and when it is not. Exerting control over working conditions can be the first step toward extending worker control over what and when to produce.

It is workers like the nurses in New York or the General Electric workers in Boston who understand best how to put their capabilities to use in the best interest of society — not their capitalist owners. Any real solution for the healthcare problem in the U.S. will need to include taking the productive forces of the healthcare sector out of the hands of capital and putting them under worker control to save lives in the midst of our current crisis and beyond.