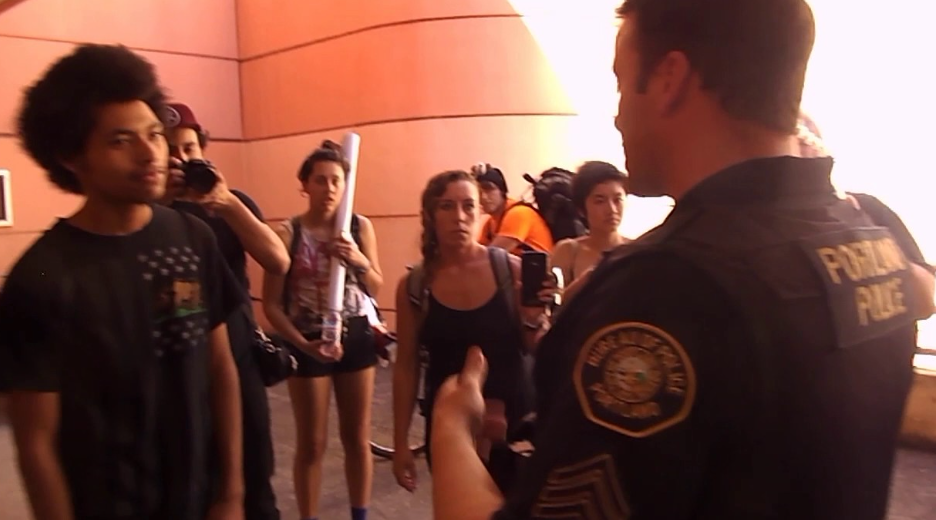 We Protest Police In The Streets, So Why Do We Let Police In Our Schools?

Above photo: Students protest police in their schools from YouTube.

The fear of black students and white savior ideology in educators and policymakers is keeping police in under-resourced schools despite their role in the school-to-prison pipeline and the well-known harm to students.

In the wake of the murders of Breonna Taylor and George Floyd, police violence has again been brought to the forefront of our country’s discussions as a systemic issue that must be addressed. Over the last 13 years I’ve taught in high schools at Chicago Public Schools, I have lost students to police violence. Every time a Black person is murdered by the police, I, like many others, am outraged. As an educator, I picture my own students, their families, or even my own colleagues being in their place.

Instead of just being upset, why are we as educators not taking an obvious step and escorting police out of our schools?

There is a large body of research that shows that having police in schools negatively impacts student learning and makes kids feel unsafe. It took the murder of Philando Castille in 2016 and George Floyd, but the Minneapolis Public School Board voted last night to cut ties with the Minneapolis Police Department. We have examples in Chicago and across the country of police abusing our students in schools. This includes police tasing a student, body-slamming a 12-year-old, flipping a student’s desk and dragging them across the floor, slapping and kicking a student, and arresting students as young as six years old.

Yet we often brush these off as the actions of ‘one bad cop’ and fail to see the systemic connections to policing, racism, and prison. Outside of schools, politicians make the ‘one bad cop’ argument all the time and then invest millions more into failed policing and criminalization.

We ignore the fact that even though schools across the country need more resources for educating students, policing in school budgets gets hundreds of millions of dollars per year from supposedly cash-strapped states. In Chicago alone, it costs $33 million per year to have the police in our schools. We ignore demands by parents, teachers, and students for more counselors and social workers instead of cops. We ignore the trauma that the police in our schools cause our students. We ignore the fact that nationally nearly 300,000 students were arrested by police in recent school years.

Our students are being charged with crimes that would normally be handled through existing internal disciplinary policies if not for the police presence in schools. These “school crimes” include things like throwing a paper airplane, throwing a baby carrot, wearing sagging pants, and kicking a trash can.

White fear, mismatched resources and anecdotes So why do we have police in our schools?

In all of my conversations with friends and colleagues, it comes down to fear. The fear of kids in the school building. People will say things like ‘some schools’ need police. ‘Some schools’ is code for Black schools in low-income areas. The fear of the big Black kid that “looks dangerous.” This trope of dangerous, scary Black people has been around for generations as a legacy of white supremacy and makes some teachers afraid of the kids that they are supposed to teach.

I have taught in high schools for all of my years in CPS. Two of the schools I taught in were in areas that definitely needed more support from the city, both within the school and in the surrounding community. Both of those schools did not have enough resources to support the students academically, socially, and emotionally due to budget cuts and purposeful city disinvestment.

The other main argument that police are “needed” in schools is to prevent a school shooter. School shootings unfortunately are a reality that kids, parents, and staff in schools must contend with. But again, emotion and fear cloud actual data. The police don’t help prevent school shootings either.

Part of growing up is, unfortunately, about making poor choices at times. Sometimes conflicts arise in schools between students. In schools lacking resources and located in communities that have been intentionally deprived of resources, the police are used to stop these conflicts. Instead of students receiving the conflict resolution support that they desperately need, their hands are zip tied or handcuffed and they are arrested. Our kids need more social emotional support, NOT police.

In white culture especially, people are indoctrinated to believe that the police are there to keep you safe. That is why the thought of getting police out of schools is so hard for many educators. Some educators will tell a story about officer so-and-so who works in their school and speak about how nice of a person that officer is and how loved that officer is. It is true there can be nice police officers, but I am not talking about your one nice anecdotal example, I am talking systemically. The police in Black and Brown schools harm Black and Brown kids, according to research not anecdotes. In just a four year period, the police officers assigned to be in Chicago Public Schools accumulated more than $2 million in misconduct settlements.

In all my years of teaching, I have worked in schools with police officers. Most officers were good people. But these same officers would still handcuff kids who got in a fight. These police aren’t bad people, they are just doing their job. Their job is to arrest. Their job isn’t to restore. Removing police from schools isn’t a new idea. Many incredible organizations like  Good Kids Mad City, Black Lives Matter Chicago, National Alliance Against Racist and Political Repression, Assata’s Daughters, Voyces, Alliance for Educational Justice, No Cop Academy, have been working on this issue and other policing issues for years.

If you are interested in helping to get the police out of our schools, a group of CPS students called Students Strike Back created this form that will send an email to Janice Jackson head of CPS. There is also a Chicago Police Department School Resource Officer Survey created by CPS that is open until Monday June 8th.  You can also email the CPS Board of Education, sign up to speak at the CPS Board of Ed. meetings and email the mayor’s office.  Here is a link to over forty more articles that you could reference when you contact others about this.