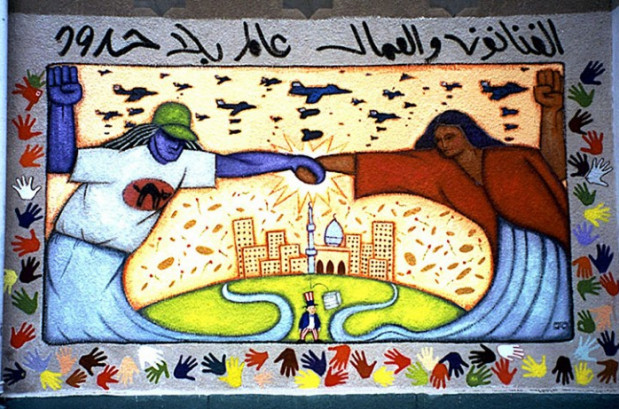 We Want To Welcome! Barcelona Demands Open Borders For Refugees

Above Photo: No Borders, No Nations, Stop Deportations by Mike Alewitz. From CreativeResistance.org.

Barcelona wants to welcome refugees. Only a radical movement can substantiate the city’s demands.

On February 18, over 160.000 people took to the streets of Barcelona to demand that the Spanish government and the European Union accept more refugees. The build-up to the protests was spectacular, with the city and Catalan regional governments working together with broad citizen platforms to put the phrase “We want to welcome” (Volem acollir) on everybody’s lips.

For several weeks, leading politicians including Barcelona mayor Ada Colau and Catalan president Carles Puigdemont lambasted Spain’s current policies towards refugees. One week prior to the protest, a special concert was organized by a campaign called Casa nostra, Casa vostra (“Our house, your house”), not in a civic center or public square but in an Olympic stadium. The event was aired on Catalan public television and featured major Catalan artists and cultural figures.

The protest itself was filled with a multitude of slogans calling out Spain and Europe’s response to the horror on the border. The central demand agreed on by the various and often opposing political actors supporting the march was ultimately an administrative one. In September of 2015, Spain promised to receive 17.337 refugees over two years. A year and a half into their commitment, they have accepted only 1.100. The City of Barcelona and the Catalan regional government were simply demanding that Spain keep its promise.

This is hardly the first time in recent history that Mariano Rajoy’s government has been accused of hypocrisy, negligence or outright hostility towards people fleeing misery, death and torture. In February 2013, the Spanish Civil Guard killed 15 people after firing 145 rubber bullets at a group of West African migrants who had tried to swim to the Tarajal beach in Ceuta, a Spanish enclave in North Africa.

The news of the protest in Barcelona has been well received by an international press thirsty for positive stories. With the rise of the far right in Europe and Donald Trump in the United States pushing journalists to scramble for fresh apocalyptic metaphors, the image of over 150,000 people filling the streets of a major European city to demand the continent open its borders provides an oasis of hope in the rapidly overheating desert of the real. As with any spectacular image, however, we must ask how much of what we see reflects reality.

Here, the temptation to play the leftist curmudgeon is great. Barcelona’s repeated efforts to brand itself as a progressive sanctuary city do not align with the city government’s repression of migrant street vendors. This stance has undermined support for Barcelona En Comú among local activists. When Colau inaugurated a sign counting the number of migrant deaths in the Mediterranean during the summer of 2016, migrants’ rights collectives disrupted the ceremony, surrounding her with pictures of her face and the words “The white left is responsible for the repression of street vendors” scrawled across it.

However, Colau’s Barcelona En Comú party has been considerably more sympathetic towards migrants than the Democratic Convergence party of Catalan president Carles Puigdemont. At the local level, the conservative nationalist formation has repeatedly spearheaded revanchist campaigns against migrant street workers, depicting them as “uncivil” agents of urban and social decay. During the 2011 Spanish general elections, their campaign posters read, “People don’t leave their countries because they want to but because they are hungry. But in Catalonia, not everyone fits in.”

This background has led some to dismiss the February 18 protest as a farce, another symbolic gesture by local politicians that dissolves once it touches reality. Or even worse, as a case of moralistic posturing aiming to absolve politicians from their responsibilities on the basis of their self-proclaimed good intentions.

This is not an unreasonable position. The Catalan independence process led by Puigdemont’s party is notorious for organizing massive events but taking few steps to actually exercise political sovereignty. Meanwhile, the reforms passed by Barcelona En Comú are dwarfed by the party’s radical campaign promises and weak position as a minority government. Criticizing Mariano Rajoy’s Popular Party, which is broadly unpopular in Catalonia, allows both parties to assert themselves as at least more progressive than the central government and pin their frustrations on the ass in Madrid.

However, this view ignores a key actor in all of this. Namely, the ordinary people who took to the streets en masse to denounce the violence, indifference and cruelty taking place at Europe’s borders. In the spectacle surrounding the protest, political parties sought to appropriate its meaning for their own causes. These include the nation-building of the Catalan independence process and the place-making of Barcelona En Comú’s municipalist project. But this is hardly surprising — it is simply the nature of a political opportunity.

For emancipatory movements, perhaps the more important question is not whether the parties’ intentions are as noble as their own but whether they can occupy the protest’s sociopolitical expediency to push society towards radical change. The enormous gap between the protest’s message of welcome and the policies adopted by the government begs to be filled with content, and its legitimacy hinges on the participation of migrant and refugee collectives. Divorced from that substance, any claim of being a welcoming place is shallow at best, cynical and insulting at worst.

This approach was taken by the street vendors union and many of Catalonia’s most combative migrants’ rights collectives, who participated in the march despite their misgivings towards many of its aforementioned supporters. Through critical engagement, they expanded the protest’s message to include not only those who hope to arrive but also those who are already here. Their demands included shutting down migrant detention centers, an end to racist persecution and structural violence and the abolition of the Foreign Nationals Act, among many others.

There is, of course, a risk to this approach. The more substantive content of the protest could be cannibalized by self-satisfaction. After the protest, the social networks were buzzing with enthusiasm. Many described how “proud” they were to be from a place that was demanding more refugees. And in the lead-up to the march, criticism of the political class was similarly self-congratulatory. As he addressed the crowd at the Casa nostra, Casa vostra concert, popular television personality Jordi Évole declared, “On the issue of refugees, our society, the people, the citizenry, are far, far ahead of the authorities.”

This sense of moral superiority may be intrinsic to turning righteous indignation into meaningful, bottom-up action, but it cannot be an end in itself. Ultimately, what makes protests like the one on February 18 necessary is not how great we are as people, but how shameful it is to be on this side of Fortress Europe, witnessing the cruelty done in our name. To merely lament this situation is a privilege. We must instead take on the responsibility to act.