‘We Will Not Wait 70 Years More’: Scenes From Gaza’s March Of Return

Above Photo: A young Palestinian looks at a poster listing the villages that demonstrators at the Great March of Return plan to return to once the Palestinian right of return is honored. (Photo: Mohammed Asad)

Amid thousands of semi-cultivated wheat and barley fields in the area of Abu Safia, east of Jabalia in North Gaza, around 30 beige canvas tents have been set up within 700 meters of the adjacent Israeli border fence, ahead of a six-week protest camp under the gaze of wary Israeli soldiers.

Those crops could hardly be seen due to tens of thousands of participants joining the encampment, an unprecedented number according to the organizers of the Great March of Return.

The first rally was kicked off on Friday, March 30th when Palestinians worldwide mark Land Day, commemorating the killing of six unarmed Palestinians protesters in Israel in 1976. 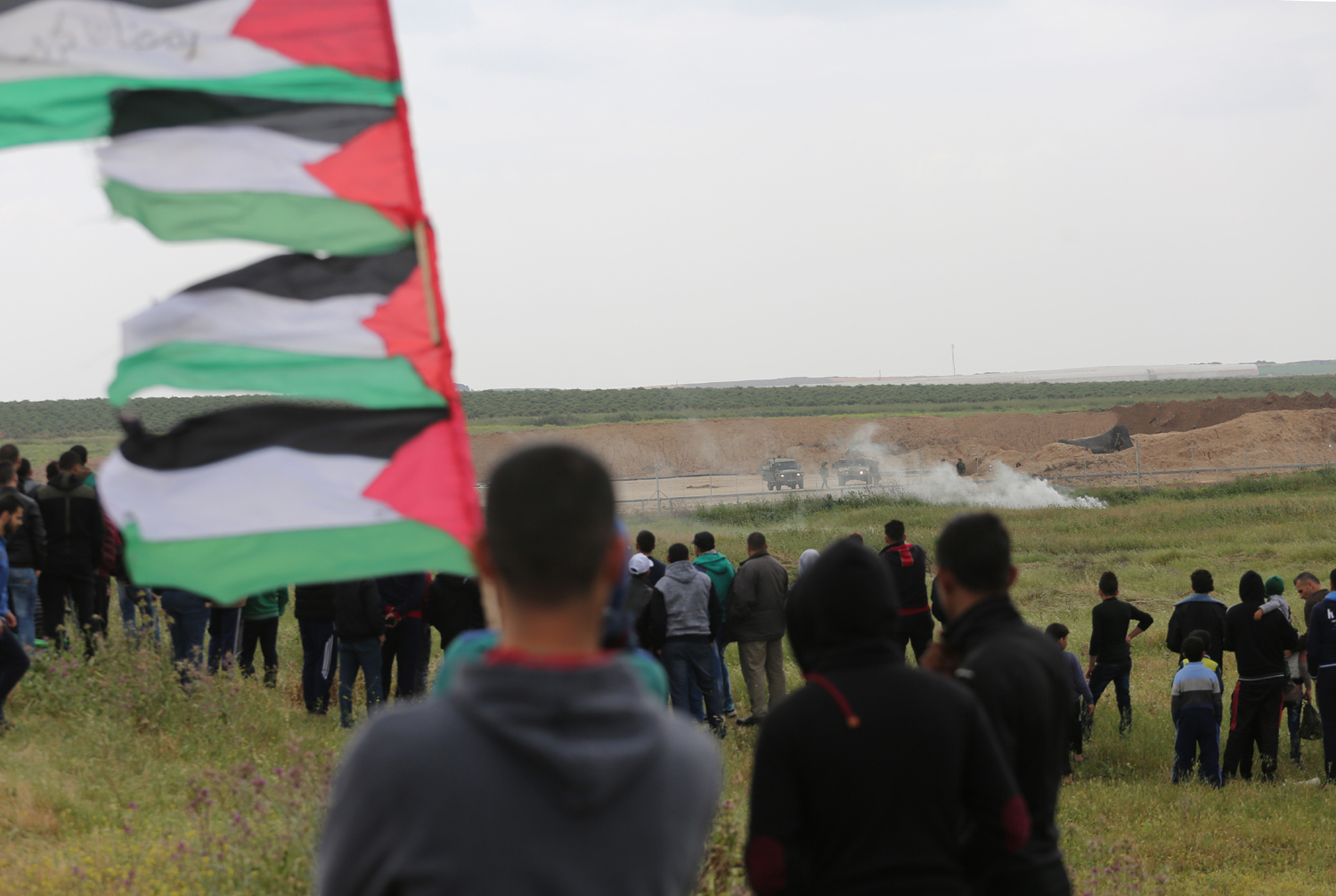 On the first day of the exceptional event, which was called by the Palestinian factions for the past several weeks, the Gaza Health Ministry reported that 15 Palestinians were killed by Israeli troops along the eastern border of the besieged strip.

Masses of angry young people tried to ignore the event organizer committee’s recommended safe distance from the border, but the tear gas bombs fired by the Israeli soldiers on the other side of the border forced them to back off. 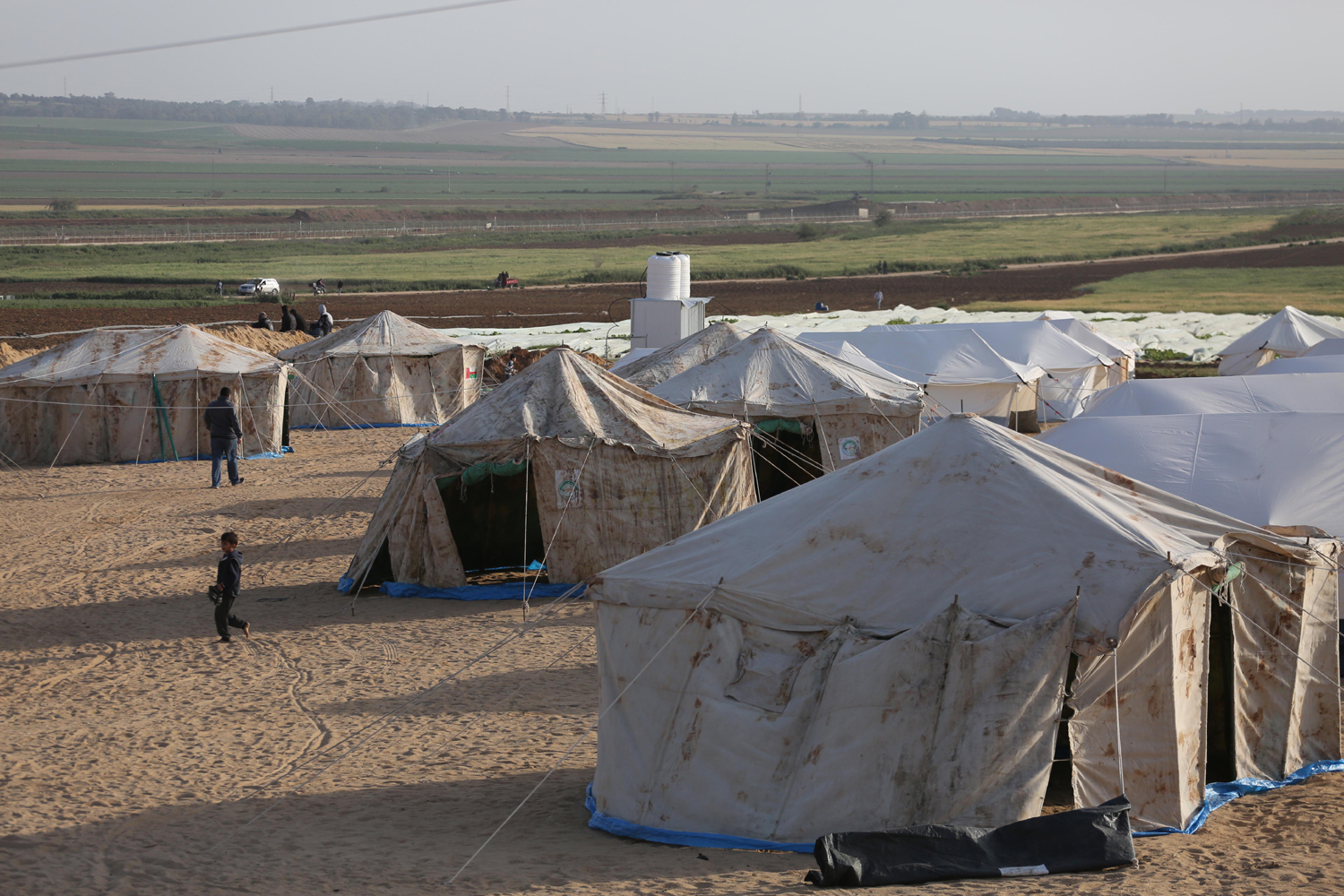 Meanwhile, a wedding ceremony between groom Alaa Shahin and bride Maryam Hamdouna was able to capture the campers’ attention for a while with an unusual scene, a wedding in the middle of the growing tension at the border.

Alaa, 23, who was carried over his relative’ shoulders amid traditional wedding songs, said that this rally is the best place to start his new life.

“Few hundred meters away from those soldiers eyes, I would emphasize my right and the whole Palestinian peoples’ right to return home after 70 years of displacement, we will not wait another 70!” Alaa told Mondoweiss.

“Today, I will be at the nearest point of my home town Ni’ilya,” he said, adding, “with my wedding suit and tie I dance and sang with the melodies of the Return.” 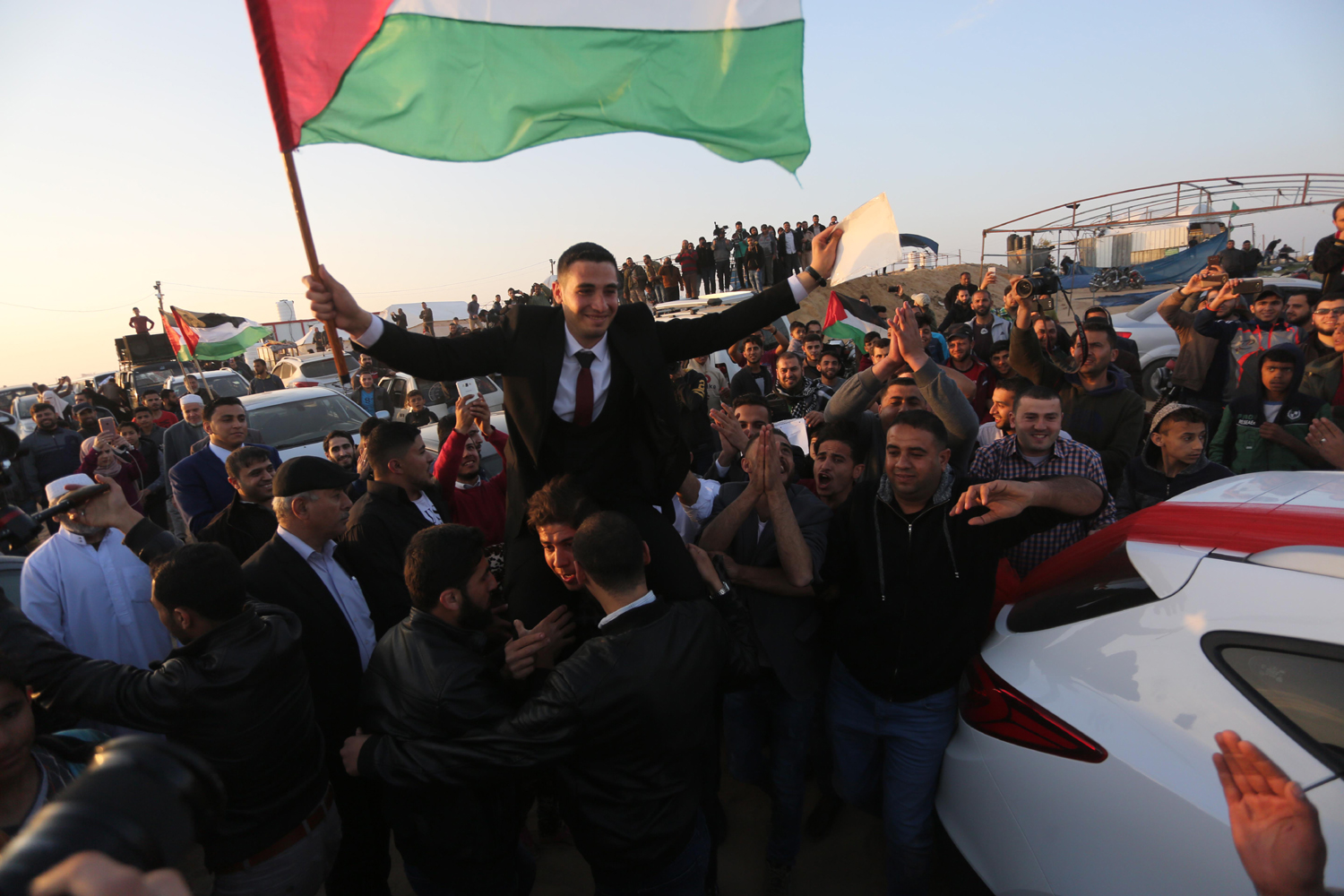 Maryam’s family is originally from Majdal village — now Ashkelon in southern Israel — which was only 3 kilometers from Alaa’s village of Ni’ilya. Maryam, 21, explained, “It is said that there was a route linking Ni’ilya with Majdal, making its way between orchards. I told Alaa, one day, we will travel that route with our children at the time of the return of the country”.

Five main camp sites have been set up spreading the length of the coastal enclave from near the Erez border crossing in the north to Rafah in the south, which is adjacent to Egypt. Camping and protests are expected to continue until May 15, the anniversary of the Nakba and around the time the Trump administration is set to move its controversial embassy to Jerusalem. 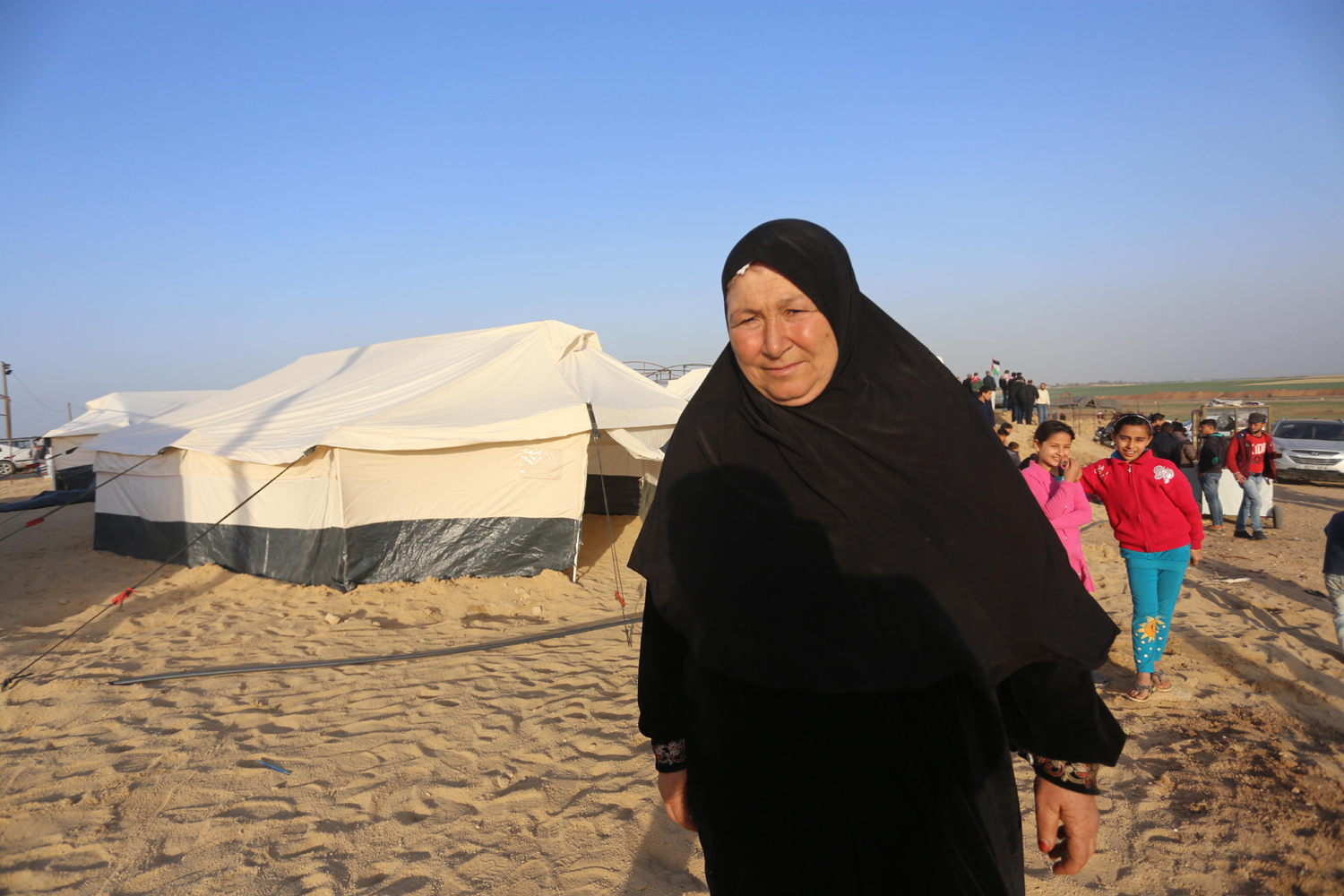 Before leaving the couple’s celebration, I met Suad Abdrabbou, who just arrived with her grandsons.

Suad, 67, who numbered her tent “1967”, said that she felt heartbreak once she saw the border for the first time.

“I recall the 1967 war, once Israel occupied the lands where I used to harvest the sweet cactus and figs, but all that became nightmares”.

The grandmother, whose origin is also from Ni’ilya, has not believed in peace with the Israelis for a day. “We have experienced them over seventy years, so I should not wait to be 140 years to return”. 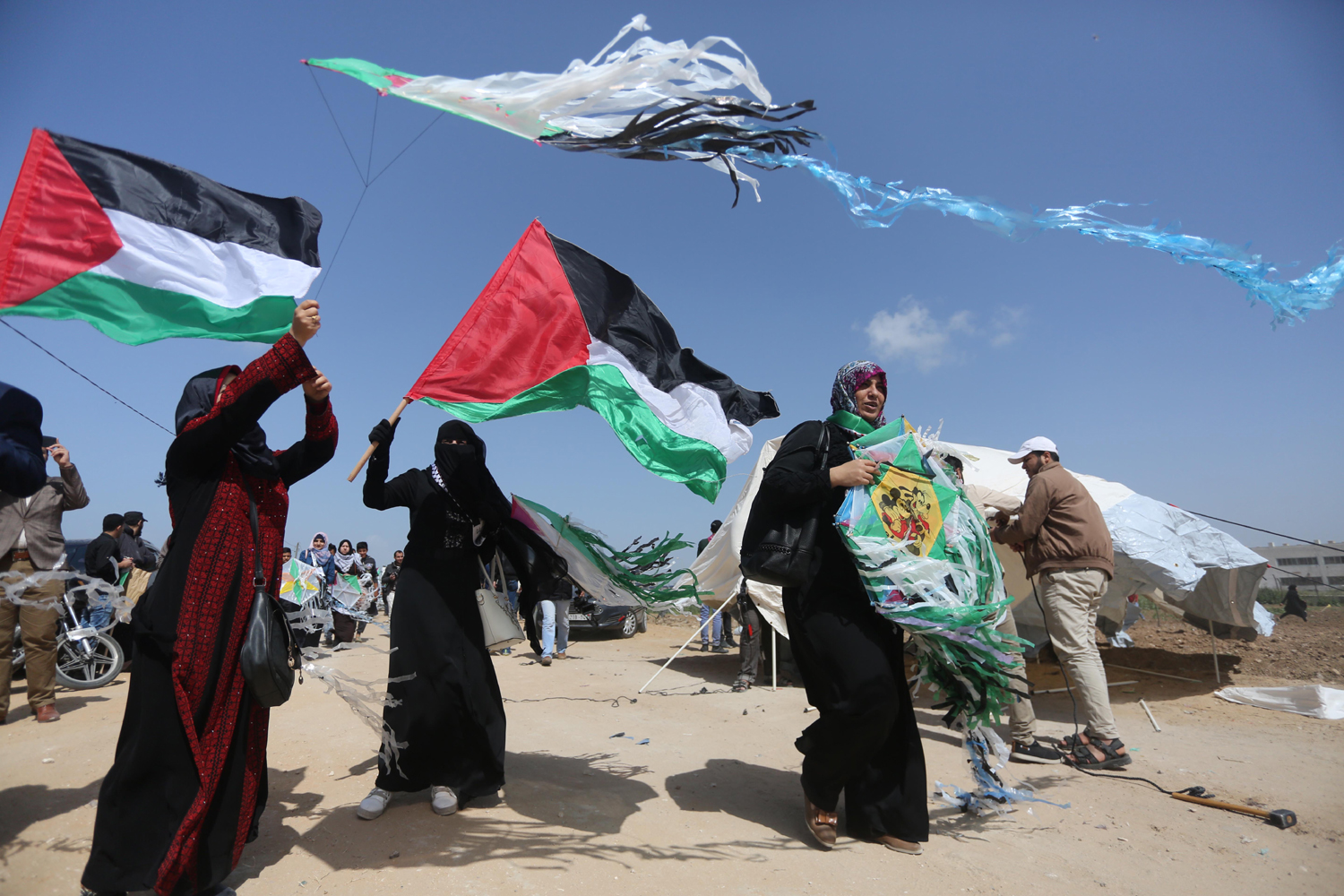 The Great March of Return in Gaza. (Photo: Mohammed Asad) 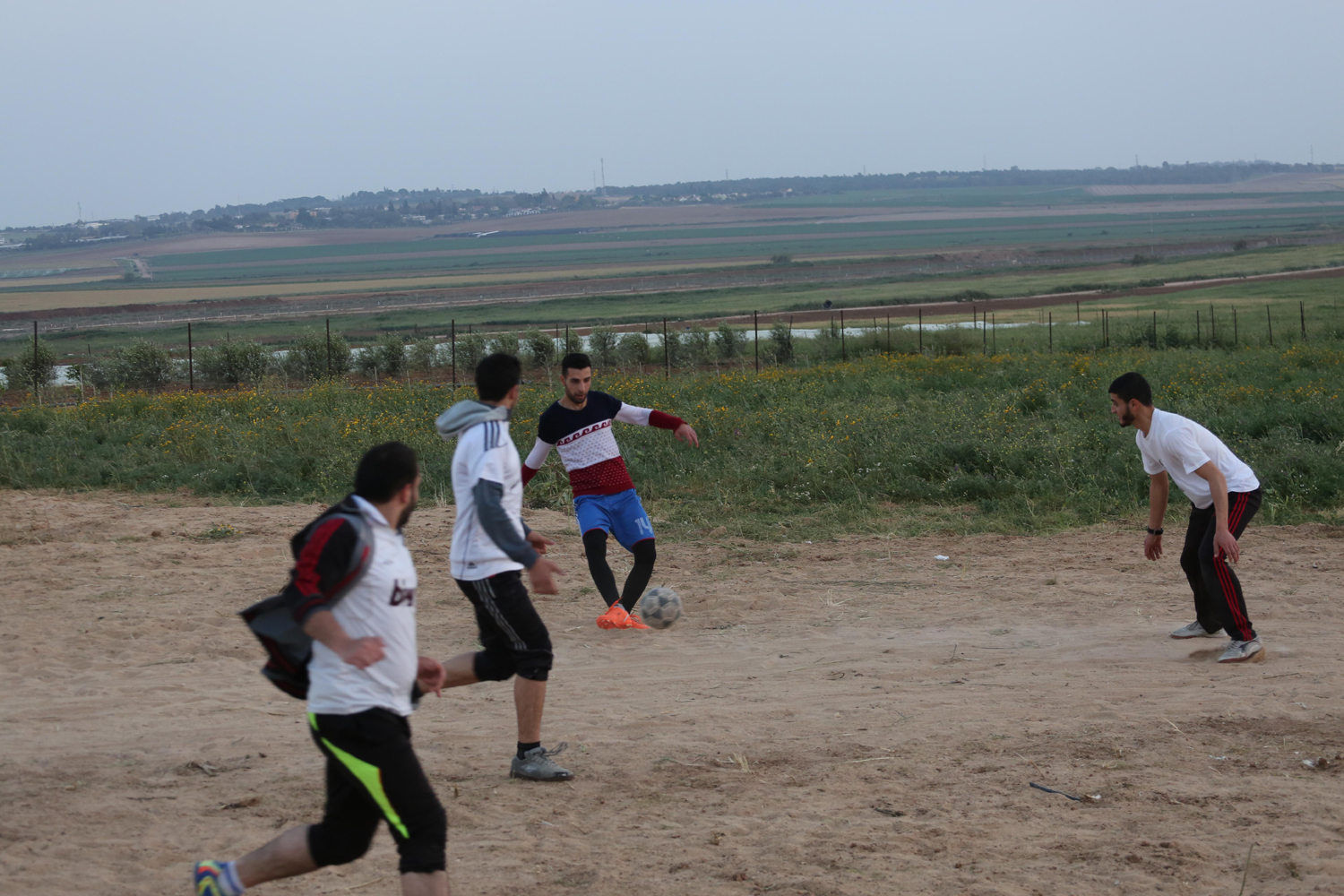 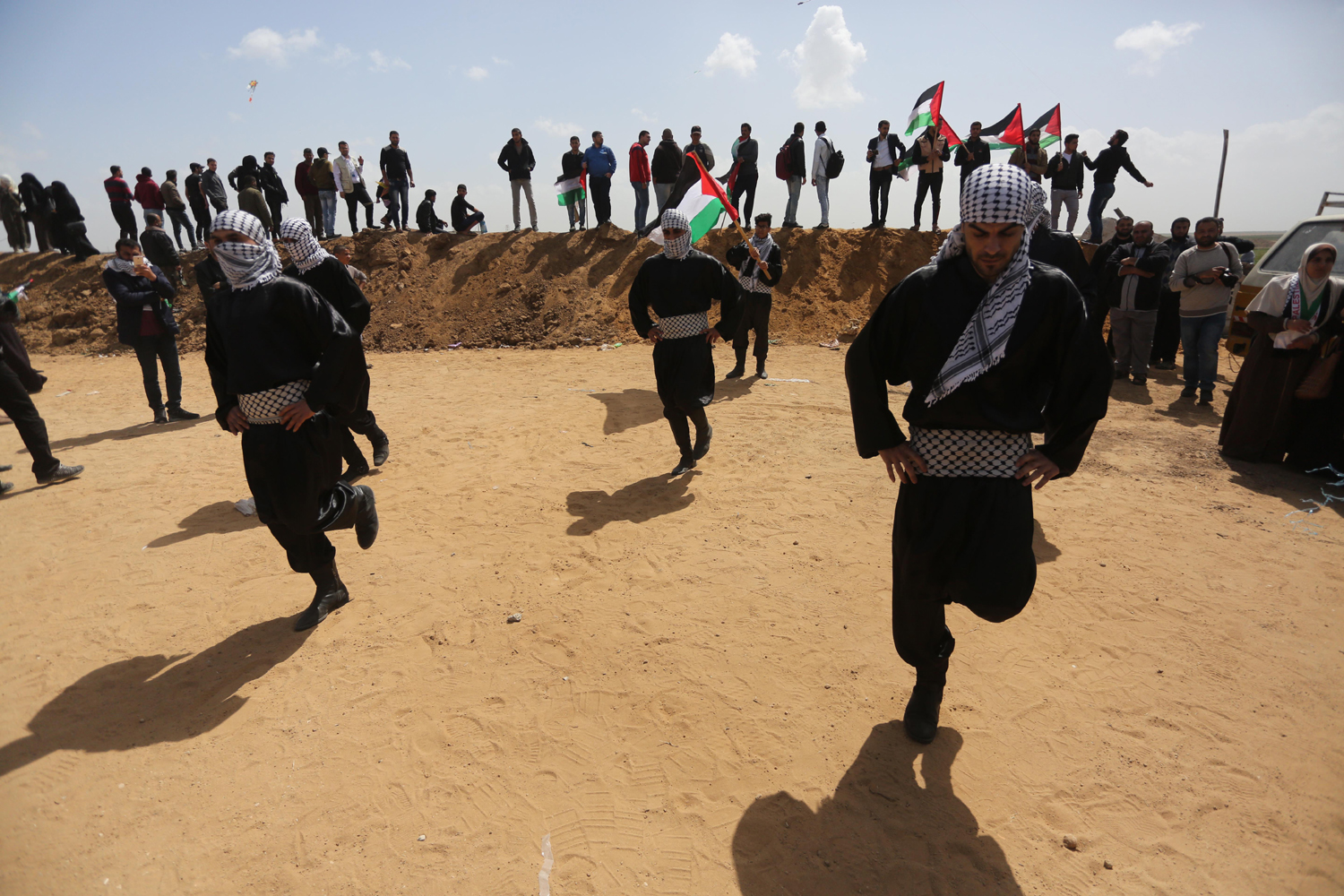 Palestinian folklore and culture was celebrated in the encampment as protests began on Land Day. (Photo: Mohammed Asad)

Some families moved many of their household items to the tents, meaning that they will spend a long time in the encampment. Military and political leaders in Israel seem concerned.

Israel’s Chief of Staff, General Gadi Eisenkot, has warned of escalating tensions along Israel’s borders and said reinforcements, including more than 100 special forces snipers, had been deployed to the Gaza frontier and the army was prepared for all scenarios.

“We won’t allow mass infiltration into Israel” or damage to the border barrier, he told the Yediot Aharonot newspaper.

According to the United Nations, some 1.3 million of Gaza’s 1.9 million residents are refugees or their descendants. The event organizers said that tens of thousands of meals would be delivered for more than 100,000 expected participants, while dozens of wooden toilets were set up and large generators whirred to life. 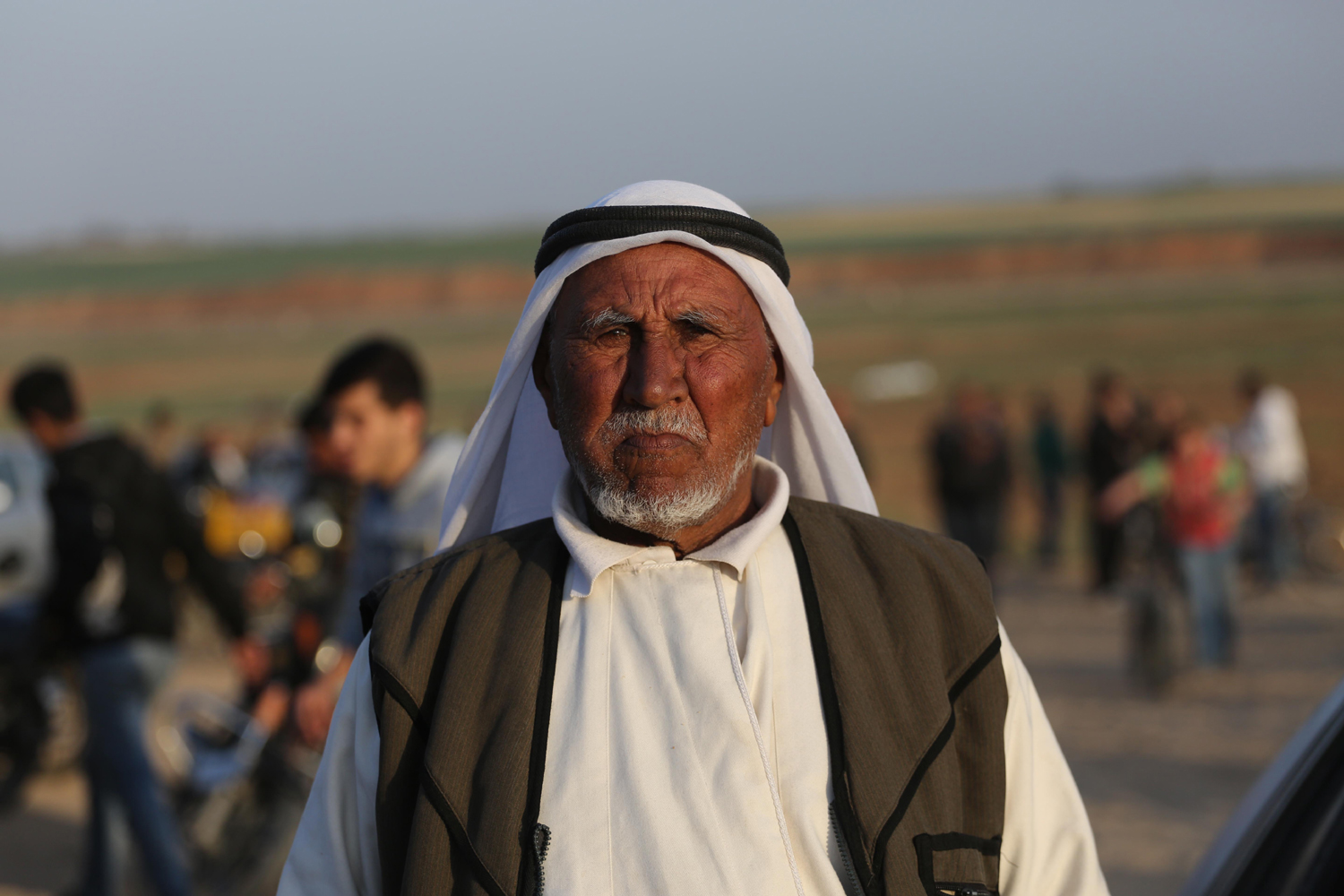 In the back row of demonstrators, 84-year-old Ahmed Abu Meteq recalled when the fathers and grandfathers of the youth protesting entered Gaza through those same borders.

“All I need is to return to Hiribya – located 14 kilometers northeast of Gaza – I would die over there. We don’t want to cross to others’ countries, we just would apply the UN resolution to go back home to our original villages,” Ahmed told Mondoweiss.

“I was 14 when my father said that we have 30 dunums in Hiribya, where we were planting watermelon which he said ‘was as big as your head, son’”.

Palestinians have long demanded that as many as five million of their compatriots be granted the right to return to their homes and lands. Israel rules this out, fearing an influx of Palestinians would eliminate its Jewish majority. Israel argues the refugees should be resettled in a future state that the Palestinians seek in West Bank and the Gaza Strip. 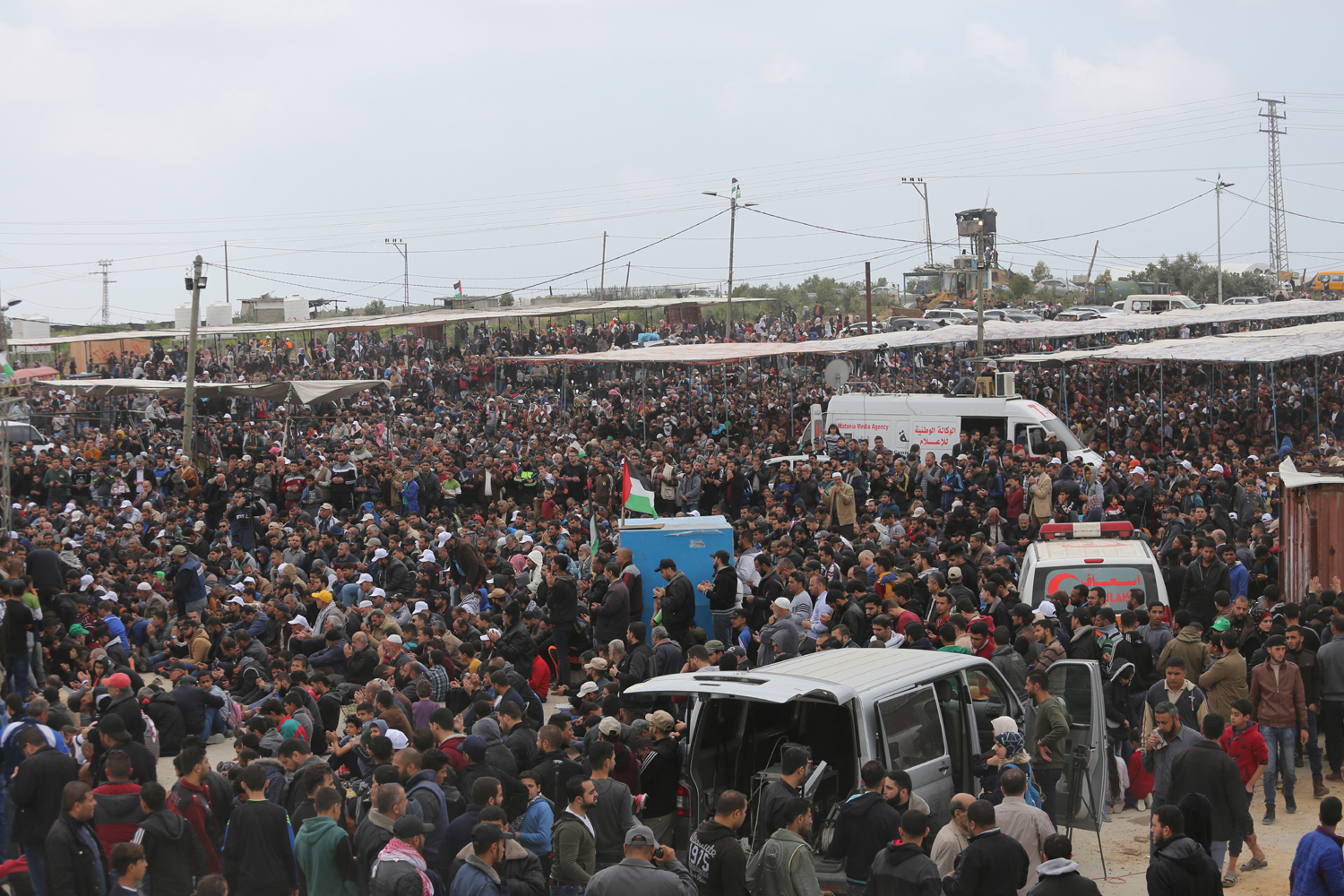 Tens of thousands of demonstrators gathered on the border areas of the Gaza Strip. (Photo: Mohammed Asad) 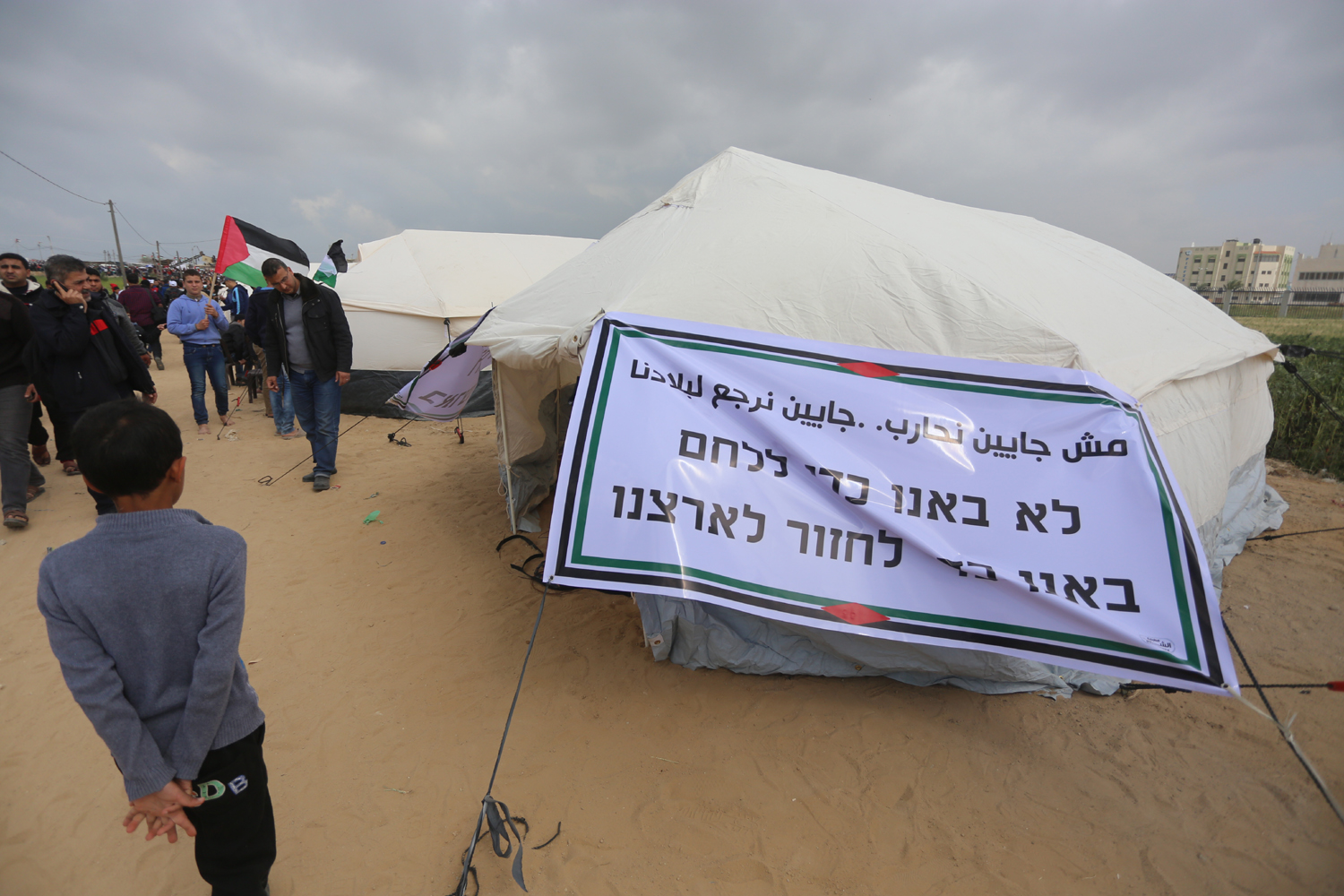 A sign on a tent in the encampment that says: “We do not come to fight, we came to return to home” (Photo: Mohammed Asad)