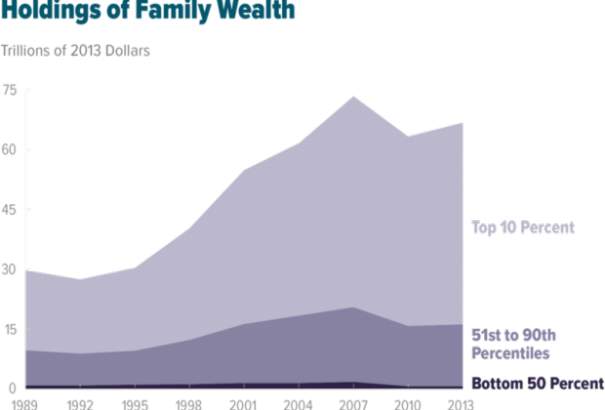 From 1989 to 2013, family wealth grew at significantly different rates for different segments of the U.S. population, and the distribution among the nation’s families was more unequal in 2013 than it had been in 1989.

In 2013, aggregate family wealth in the United States was $67 trillion (or about four times the nation’s gross domestic product) and the median family (the one at the midpoint of the wealth distribution) held approximately $81,000, CBO estimates. For this analysis, CBO calculated that measure of wealth as a family’s assets minus its debt. CBO measured wealth as marketable wealth, which consists of assets that are easily tradable and that have value even after the death of their owner. Those assets include home equity, other real estate (net of real estate loans), financial securities, bank deposits, defined contribution pension accounts, and business equity. Debt is nonmortgage debt, including credit card debt, auto loans, and student loans, for example.

How Is the Nation’s Wealth Distributed?