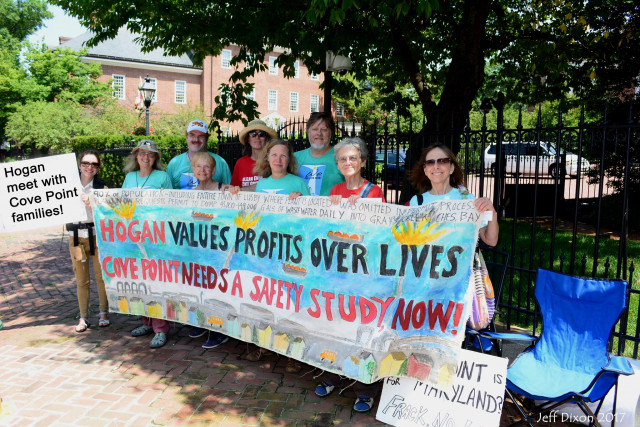 Weekly Rally For A Safety Study For Cove Point

June 24, 2017 was a turning point for We Are Cove Point. After years of meeting with legislators and state officials to ask for a safety study (known as a Quantitative Risk Assessment or QRA) on Virginia-based Dominion Energy’s fracking refinery, power plant and gas export terminal being built in Cove Point, we learned that the Governor “supports the project and will not order a safety study.”

We believe it is possible for the Governor to support the project and have concerns about the health and safety of the thousands of families living close to Dominion’s facility.

We can’t accept “no” as an answer because this is the first facility of its kind anywhere in the world to be placed in such a densely-populated area.

We ask you to join us in taking action to convince Governor Hogan to order a safety study:

We learned in 2016 that the Governor has the executive authority to pick up the telephone, call the Department of Natural Resources, and order the safety study. If done properly (that is by an independent body), the study would quantify the risk of an adverse event such as a leak, fire or explosion, the expected impact of such an event and how the community and emergency services would respond.

Starting on Monday, June 29, 2017, we have rallied weekly in Annapolis outside the State House and the Governor’s mansion. We’ve spoken to the Governor, but still no study. On July 7, 2017, we requested a meeting with the Governor and families and experts from Cove Point. We have not had a response, but we are getting his attention!

We need your help to build our presence and our pressure! We believe that if we persist, we will prevail.

Here is a schedule of events:

Monday, July 24 – Phone-in for a Safety Study – we’re bringing a giant phone to the Governor’s mansion and we’re urging everybody that we see to call him. Facebook page.

Monday, July 31 – Sing-in for a Safety Study – bring your instruments and your songs! Facebook page.