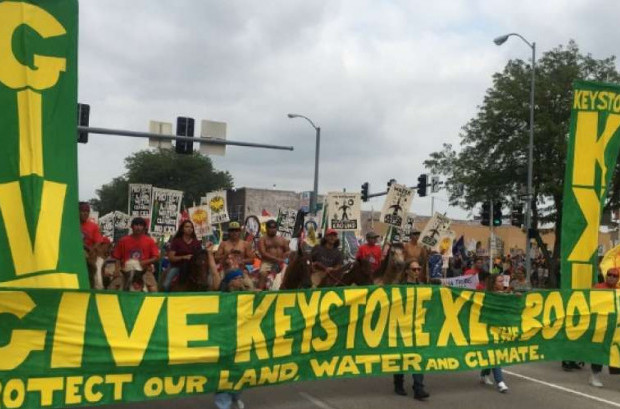 “Commissioners in Nebraska have a choice to make—either they protect the fossil fuel industry’s greed, or they stand up for the health and safety of our climate and our communities.”

Hundreds demonstrated in Lincoln, Nebraska, on Sunday as part of the March to Give Keystone XL the Boot.

The protest of TransCanada’s proposed pipeline kicked off a week of events planned to coincide with public hearings, set to begin Monday, by the Nebraska Public Service Commission about the pipeline, which would run 275 miles across the state.

Locals farmers and ranchers as well as members of the Ponca Tribe of Nebraska and Yankton Sioux Tribe marched with a coalition of environmentalists from Bold Nebraska, 350.org, Sierra Club, Indigenous Environmental Network, CREDO, Greenpeace, Oil Change International, and MoveOn. Some even rode on horseback through Lincoln’s streets.

LIVE: Marchers from the Kickapoo Nation have arrived on horseback, as the crowd swells to Give Keystone XL the BOOT! #BootKXL #NoKXL pic.twitter.com/DwFDWF1jwh

The coalition has collected thousands of written public comments expressing concerns about Keystone XL’s threats to climate, water, and property rights, which will be delivered to the commission Thursday morning. “The Nebraska Public Service Commission has an immense responsibility. Not only does it have the responsibility to act in the best interest of Nebraska but also bear the trust responsibility the federal government chooses to ignore,” said Harold Frazier, Cheyenne River Sioux Tribe chairman.  “Approving the permit for TransCanada would send a message that Nebraska supports the damage that has already happened to our environment from the tar sands oil.”

“Keystone XL never has been and never will be in Nebraska’s public interest. This is a foreign pipeline, headed to the foreign export market, wanting to use eminent domain for private gain on Nebraska landowners,” said Bold Alliance president Jane Kleeb, who also noted that the proposed pipeline route crosses the Sand Hills and the Ogallala Aquifer.

A recent Greenpeace report (pdf) predicted that the Keystone XL pipeline, if constructed, would average more than one significant spill per year, posing a serious threat to all water resources along the route. The Nebraska Sand Hills—the Western Hemisphere’s largest sand dunes—has been designated a National Natural Landmark by the U.S. Department of the Interior. (However, the department seems unlikely to fight the pipeline, with a deputy secretary who, before his appointment by President Donald Trump, had built a successful career as a lobbyist for the oil and gas industry.)

“It is not in Nebraska’s interest to place a tar sands pipeline through Nebraska’s eastern Sand Hills and over the Ogallala Aquifer, or to allow a foreign corporation to use eminent domain for corporate greed and abuse landowners with ‘all risk, no reward’ easements,” said Art Tanderup, a landowner along the Keystone XL route.

“Commissioners in Nebraska have a choice to make—either they protect the fossil fuel industry’s greed, or they stand up for the health and safety of our climate and our communities,” said 350.org’s Sara Shor. “Communities in Nebraska and from surrounding states, including farmers, Indigenous peoples, and many more, are here to keep the pressure on and fight for a livable future. We’ve built solar panels in the path of Keystone XL to show what we need on a massive scale.” Last month, the coalition launched the Solar XL campaign to install solar panels at several locations along the proposed pipeline route, which a 350.org statement explained “will help power the farms and ranches threatened by TransCanada’s use of eminent domain for private gain.” Sunday’s protest ended with a display in front of the state’s Capitol, with protesters using their bodies to send a message: Yes Solar XL, No KXL.