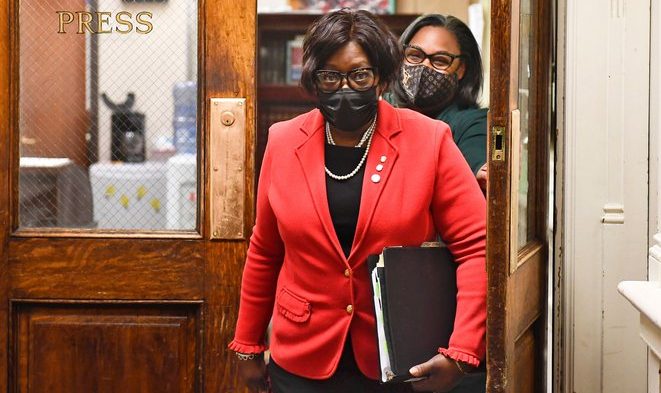 Above photo: Assemblymember Crystal Peoples-Stokes, the lead Assembly sponsor of the Marijuana Regulation and Taxation Act, shortly before the historic vote. Hans Pennink/AP/Shutterstock.

On Tuesday night, New York went from being the marijuana arrest capital of the world to passing one of the most progressive legalized cannabis laws in the country. Update: Governor Andrew Cuomo signed the bill on Wednesday morning [more details below].

As expected, the State Assembly and the State Senate both overwhelmingly passed the Marijuana Regulation & Taxation Act, which permits adults 21 and over to purchase marijuana and grow the plant in their home. The legislation’s two main sponsors, Assemblymember Crystal Peoples-Stokes and Senator Liz Krueger, had fought for the bill’s passage for more than seven years. Governor Andrew Cuomo, who had repeatedly tried to impose his own legalization plan on the legislation, agreed to sign the MRTA last week, as he continues to govern amid multiple scandals and investigations.

“The bill we have held out for in this state will create a nation-leading model for legalization,” Krueger said just before casting her vote. “New York’s program will not just talk the talk on racial justice, it will walk the walk.”

The MRTA directs 40% of cannabis revenues to education, 40% to community reinvestment grants for communities harmed by marijuana prohibition, and 20% to drug treatment and public education programs. Marijuana arrests and convictions legalized under the law will be expunged, and law enforcement will not be able to use the odor of marijuana as a pretext for a search. New Yorkers currently working in the illegal market will have an opportunity to obtain one of ten different licenses to work in the new cannabis economy, which is projected to bring in $350 million in taxes each year as well as create 30,000 to 60,000 jobs statewide.

“Unlike any other state in this nation, this legislation is intentionally about equity,” Peoples-Stokes told her colleagues.

The law will take effect immediately after the governor signs it, but it could take many months before New Yorkers see the first legal sales of marijuana, as the licenses are issued and the system is set up.

Over the late ’90s and early 2000s, 800,000 New Yorkers were arrested or ticketed for marijuana, more than anywhere else in the world, despite the fact that the legislature decriminalized small amounts of cannabis in the late ’70s; around 85% of those arrested were Black or Latino.

During the floor debates, state lawmakers repeatedly invoked these racial disparities in drug enforcement as the main reason for legalizing marijuana.

“We are arrested 3.73 more times than white people for just having the plant in our possession,” said Bronx Assemblymember Chantal Jackson. “These arrests are racially targeted. And I hope my colleagues understand when I say, that leading with the idea of the adult use of marijuana as a revenue raiser, it’s offensive, and it’s downright wrong and it’s a spit in the face of all the black bodies this state and this nation who have been arrested for this plant.”

Krueger noted that she last smoked marijuana when she was 19 years old, at a screening of Rocky Horror Picture Show in Chicago.

“No one tried to put me in jail, because I was this nice white girl,” Krueger said.

Republicans expressed their displeasure with the bill on the floors of both chambers.

“My family members have gone through drug addiction,” said Long Island Senator Mario Mattera. “It went from marijuana, to Adderall, to cocaine, to acid…This is serious, this is a gateway for our young children’s problems.”

Senator George Borrello, whose district sits right below Buffalo, insisted that the MRTA will cost “thousands of lives.”

Republicans also pointed out that police may not be able to tell if a driver is intoxicated from using cannabis, though the bill calls for drug recognition training and research for a device that can detect marijuana intoxication during a roadside stop.

My statement on the legislation passed tonight by the NYS Legislature to legalize adult-use cannabis: pic.twitter.com/CqYs6oLWTn

The MRTA creates an Office of Cannabis Management, whose representatives will be appointed by the governor and the legislature. They will oversee licensing for dispensaries, growers, wholesalers, and “consumption sites,” with the goal of issuing half those licenses to people who have been negatively impacted by prohibition. New Yorkers will be able to grow up to six plants each, according to the new rules.

In casting her vote, Assemblymember Peoples-Stokes noted that “the last time New York state did anything like this, is when we were removing the prohibition from alcohol, in 1933.”

Update, March 31, 2021: In a press release, the governor’s office released that Cuomo signed the legislation. In a statement, he said, “This is a historic day in New York – one that rights the wrongs of the past by putting an end to harsh prison sentences, embraces an industry that will grow the Empire State’s economy, and prioritizes marginalized communities so those that have suffered the most will be the first to reap the benefits.”

“This legislation is a momentous first step in addressing the racial disparities caused by the war on drugs that has plagued our state for too long. This effort was years in the making and we have finally achieved what many thought was impossible, a bill that legalizes marijuana while standing up for social equity, enhancing education and protecting public safety,” said Senate Majority Leader Andrea Stewart-Cousins. “I applaud Senator Liz Krueger and Assembly Majority Leader Crystal Peoples-Stokes for their commitment and leadership on this issue.”

“My colleagues and I knew it was important to do this the right way—in a way that would include those targeted and frequently excluded from the process,” said Assembly Speaker Carl Heastie. “Now, this legal industry will create jobs across our state, including for those who have had their lives upended by years of unjust drug laws.”