Above Photo: Protesters in Vanuatu join demonstrations around the world in support of West Papua’s fight for independence on Friday

In West Papua, simply raising the Morning Star flag – a symbol of the island’s fight for independence from Indonesia – can result in 15 years of imprisonment.

But more than 12,000 kilometres away in the UK, the forbidden flag was raised this morning outside Oxford’s town hall for the tenth year in a row.

Oxford is one of more than 250 locations across 50 countries worldwide expected to raise the Morning Star flag today in a show of solidarity with tens of thousands of West Papuans calling for international intervention in the fight for independence from Indonesia.

“In West Papua, the whole essence of our humanity is being reduced to nothing. We are treated like animals and endure what some have described as an ‘apartheid-like’ military occupation,” exiled Free West Papua campaign leader Benny Wenda, who was granted political asylum in the UK in the early 2000s, and lives in Oxford, told The Independent.

“Tens of thousands of us have been forced to flee as refugees and those that stay live under constant terror. Almost every day, people are arrested without reason, tortured and killed at the hands of the Indonesian government.”

An undated document published on the UNHCR website states that Papua New Guinea alone has taken in as many as 10,000 refugees from West Papua since 1985. 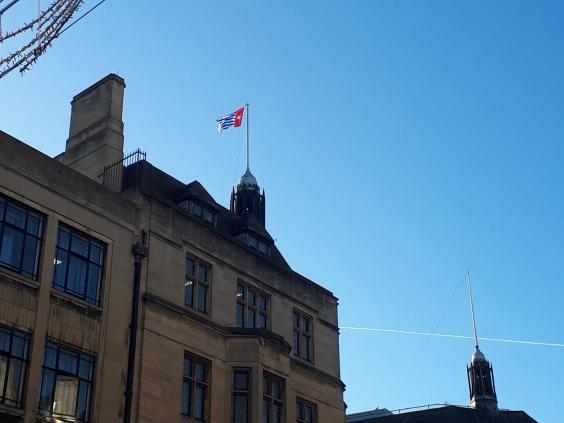 Today’s flag-raising protests come two months after a petition that gained over 1.8 million signatures – more than 70 per cent of West Papua’s population – was presented to the United Nations, calling on the organisation to investigate human rights abuses on the island.

It also demanded that the UN’s Decolonisation Committee (C-24) put West Papua back on its agenda to “ensure their right to self-determination … is respected by holding an internationally supervised vote”.

“Carrying out [the petition] took months of dedicated hard work and commitment after years of planning,” Mr Wenda said.

“It was also incredibly dangerous because the Indonesian government immediately banned the petition and stated that anyone who signed it would be arrested.”

The Free West Papua campaign claims that 57 people were arrested by the Indonesian military for supporting the appeal.

The petition was rejected by the C-24 however, with its chair, Rafael Ramírez, telling The Guardian no petition regarding West Papua could be accepted due to the committee’s mandate being extended exclusively to the 17 states identified by the UN as “non-self-governing territories”.

“West Papua is not a matter for the C-24,” Mr Ramírez said. “We are just working on the countries that are part of the list of non-self-governing territories. That list is issued by the general assembly.”

“One of the principles of our movement is to defend the sovereignty and the full integrity of the territory of our members. We are not going to do anything against Indonesia as a C-24.”

The C-24 did not immediately respond to a request for comment from The Independent and the United Nations High Commission for Refugees said it could not comment on decisions made by other UN bodies. 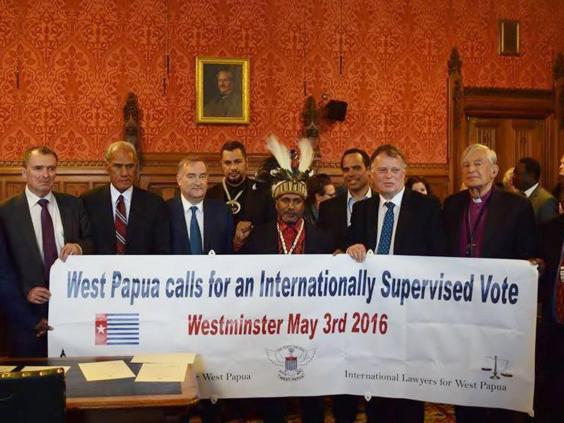 West Papuans have been calling on the United Nations to intervene in what has been called a “slow-moving genocide” for decades, as the Indonesian military continues to occupy the Asian island.

The province was once on the committee’s agenda, when it was a Dutch colony known as Netherlands New Guinea, but it was taken off the list in 1963 when the territory was annexed by Indonesia.

In 1969, an Act of Free Choice referendum meant to decide whether West Papua would join Indonesia or become independent was supervised by the UN.

However, researchers at Australia’s Griffith University have noted that less than 1 percent of the West Papuan population was selected by the Indonesian government to represent the entire territory and that those representatives were “coerced to vote for the official integration of West Papua into Indonesia”.

They estimate that in the last 50 years, more than 500,000 people have been killed in West Papua as a result of the Indonesian government’s occupation, calling the situation in Indonesia a “slow-moving genocide”.

Amnesty International and Human Rights watch have also put the death toll at 500,000.

“No one knows if they are going to be the next person killed, but every West Papuan person can tell you about family members who have been,” Mr Wenda said.

“As a child, I remember the Indonesian military bombing my village and in front of my eyes they raped my aunties and beat up my mother just because she didn’t have an ID card.” 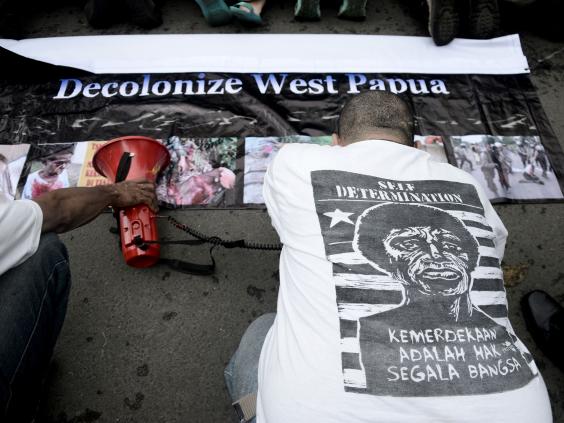 “The Indonesian government has been able to keep this very quiet and so West Papua has been one of the forgotten stories in the world,” human rights lawyer Melinda Janki said.

Ms Janki says she learned of West Papua’s plight after she was approached by Mr Wenda a decade ago for legal advice.

“This violation of the people’s rights to self-determination seems to have been completely forgotten.

“It all sort of culminated in 1969 in what the Indonesians have called the ‘Act of Free Choice’, but which was really an exercise in which they brought 1,022 people together and basically forced them at gunpoint to say that they wanted to remain as Indonesian, so there really are not grounds for saying that this was a genuine act of self-determination.

“That was in 1969 and nearly 50 years later this issue continues to be buried,” Ms Janki continued. “I think it’s been an enormous failure on the part of the United Nations and I think the General Assembly spectacularly failed to take into account the rights of the West Papuans.”

The UK’s parliamentary group on West Papua has called Indonesia’s presence in West Papua an “illegal occupation” based on a “sham referendum”.

“Put simply, it’s an illegal occupation. Promised its original independence from the Dutch in 1962, West Papua’s incorporation into Indonesia followed in 1969 after what was widely acknowledged to be a sham referendum, engineered by the economic interest of the Indonesia government,” Labour MP Alex Sobel told The Independent.

“The colonised territory is rich in gold, copper, natural gas, forests and fisheries from which the indigenous population see very little, to no benefit.”

He continued: “The UN will not be able to avoid this issue forever and as [the Free West Papua campaign’s] petition proves, the West Papuan people refuse to be silenced,” adding: “Quite simply, it’s an unacceptable part of the UN’s history that must now be put right.” 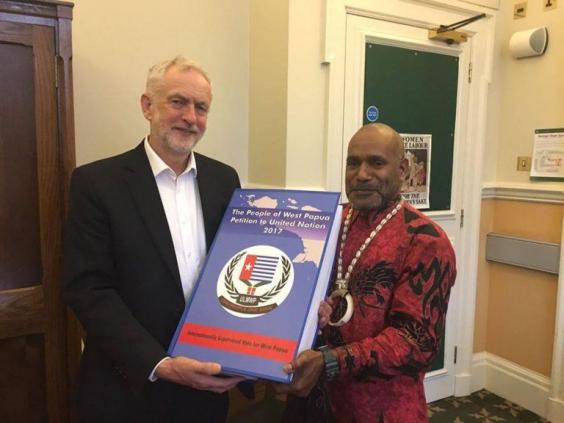 Melanesian leaders have also accused the United Nations of turning a “deaf ear” to human rights abuses in West Papua.

The Prime Ministers of the Solomon Islands and Vanuatu called on the UN’s Human Rights Council to launch a formal investigation into human rights abuses in the province at the UN General Assembly in New York in September.

Vanuatu Prime Minister Charlot Salwai told the assembly: “For half a century now the international community has been witnessing a gamut of torture, murder, exploitation, sexual violence and arbitrary detention inflicted on the nationals of West Papua, perpetrated by Indonesia, but the international community has turned a deaf ear to the appeals for help. We urge the Human Rights Council to investigate these cases.”

“We also call on our counterparts throughout the world to support the legal right of West Papua to self-determination and to jointly with Indonesia put an end to all kinds of violence and find common ground with the nationals to facilitate putting together a process which will enable them to freely express their choice.”

A spokesperson from the Indonesian Embassy in the UK told The Independent:  “We categorically reject allegations concerning the ‘slow moving genocide’ or any other jargon to exaggerate the human rights situation in Papua.

“In fact, promotion and protection of human rights have been one of the most important elements in Indonesia since we became a democracy in 1998. The government is working together with our national human rights institution, or the National Commission on Human Rights, and has established working groups to resolve past human rights issues in Papua and West Papua Provinces.

“While we continue to resolve those issues, one should not forget that human rights also include right to education, right to health, as well as right to adequate standards of living. President Jokowi [Joko Widodo] is putting efforts to make sure the people of Papua now gain access to much needed education and healthcare services.” The spokesperson added that Indonesia has seen a general hike in economic growth from 3.6 per cent in 2014 to 9.2 per cent in 2016 in Papua and West Papua.

Indonesia restricts foreign journalists from reporting in the provinces of Papua and West Papua, making it difficult for news organisations to determine what is happening on the ground level.

Mr Wenda said he believes with growing support from the international community, the UN will have to address calls from West Papuans for intervention.

“The C-24 could not officially accept the petition because West Papua was wrongly taken off the list of non-self governing territories in 1963,” Mr Wenda said.

“For over 50 years, we have had our voices systemically silenced and crushed by the Indonesian government and we have never been able to present our case to the UN.

“Now, the UN cannot ignore our obvious demands for our right to self-determination to be recognised. This petition is vital evidence of the will of the West Papuan people.”