A bill in the West Virginia legislature that pairs meager salary increases with new attacks on public education has been indefinitely tabled in the face of massive rank-and-file opposition from teachers and school service employees who are continuing their statewide strike today.

The walkout by 33,000 teachers and school service personnel, which began Tuesday morning, forced the shutdown of schools in all 55 counties. An attempt to open by one district, Putnam County, failed miserably after teachers picketed, and buses and students did not show.

A section of the crowd

The strike occurs almost a year since the last West Virginia teacher strike initiated the largest wave of strikes by US educators in more than a generation.

Efforts by the unions to declare “victory” after the tabling of the bill and to pressure strikers back to work failed to convince striking educators who remember all too well similar declarations after the unions shut down their powerful nine-day strike last year. In the year since, none of the promises made by union officials and Governor Jim Justice to address low pay, crushing health care costs and chronically underfunded schools have materialized.

Having forced the unions to call a strike, teachers were determined to maintain their momentum to fight not only to defeat the reactionary state legislation, which would introduce charter schools for the first time in state history and other school privatization schemes, but to win their demands, which had been ignored in last year’s settlement.

With West Virginia teachers once again in the lead, and with teachers in Oakland, California slated to go out on strike on Thursday—on the heels of major strikes in Los Angeles and Denver—the movement threatens to coalesce into a nationwide general strike in defense of public education.

In recent days, fifteen governors have asked for increased teacher pay in an attempt to forestall further strikes. Among actions threatened so far are: a renewed strike in Arizona should Governor Ducey’s pledge of a 20 percent pay increase not take effect, “action” in Indiana if the legislature doesn’t boost pay this session, and a strike by the end of the school year in Louisiana. Teachers rallied across Virginia in January, and teachers in Oklahoma, South Carolina, Mississippi, Arkansas continue to threaten further action for increased pay.

The West Virginia House voted 53-45 to indefinitely table its version of a bill initiated in the senate as Bill 451, that would have conjoined a miserly 5 percent wage increase to various initiatives to syphon funding away from public schools. Both versions of the bill would have legalized charter schools in the state, which is one of only six in the country that does not have a charter school industry.

The three unions covering the state’s educators, along with Randi Weingarten, the national leader of the American Federation of Teachers had announced their backing for the House version of the bill, largely because state Democrats had stripped out a provision that would have compelled unions to get annual permission from teachers to deduct union dues from their paychecks.

West Virginia teachers were outraged. Their unions—West Virginia Education Association (WVEA), American Federation of Teachers-West Virginia (AFT-WV), and the West Virginia School Service Personnel Association (WVSSPA)—had promised last year, in exchange for ending the strike, that they would see increases in salaries and school funding. They also heard earnest declarations about “commitment” to dealing with spiraling health care costs due to years of intentional underfunding of the public employee health insurance program or PEIA.

Instead, by sabotaging the strike, the unions had only opened the door for the escalation of the attack on teachers and public education in West Virginia and across the country.

The unions were forced to call Tuesday’s walkout only to preempt a new movement toward wildcat strikes gathering support among teachers. And it was only in the face of massive opposition that they determined to sanction it a second day on Wednesday. WVEA President Dale Lee went out of his way to say the union was a “member-driven” organization, a false claim but one that nevertheless expressed the fear of the union bureaucracy that rank-and-file teachers would defy a back-to-work order like they initially did last year. 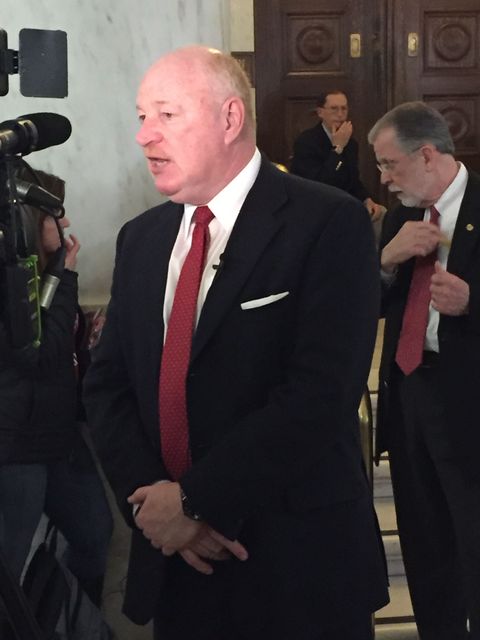 On Tuesday evening, after declaring the strike’s continuance, AFT-WV President Fred Albert and WV-SSPA President Joe White appealed directly to state politicians to provide further cover so that they can order teachers back to work and maintain a modicum of credibility. “We are staying out one more day to make sure that this is a dead bill tomorrow,” Albert said. For his part, White admitted that teachers were opposed to returning to work. “The trust is not there,” he said.

The unions are looking to sell what billionaire Republican Governor Jim Justice calls a “clean bill,” House Bill 2730, which includes only a small raise and momentarily leaves aside—for the time being—other corporate-backed “school reform” measures. Justice, a former Democrat, said he would look into backing a “pilot program” of two to three charter schools, which teachers correctly see as a foot in the door for school privatization.

In a statement, which was shared widely by teachers and school employees on social media, the WSWS Teacher Newsletter called for educators to reject any return to work and instead fight to expand their fight against the bipartisan attack on public education.

“Teachers all across the country, including educators in Oakland, California, who are set to strike on Thursday, are looking to West Virginia teachers to take the lead again. There is a growing resolve to fight. Everywhere teachers want to unite and fight together, but the question is: how?

“There is a growing mood for a general strike bringing together all workers across all industries. Teachers will win massive support and bring their enemies in Charleston to their knees by calling for all workers to join them in a general strike. Workers’ strength lies in their unity and their independence from the unions and the Democratic and Republican parties controlled by the rich.”

The resources needed to vastly improve public education and guarantee living wages to all school employees can only be secured through a frontal assault on the giant corporations and the super-rich, including the coal and natural gas industries, which have bled public education and other state services in West Virginia dry. This, in turn, requires a political struggle against both corporate controlled parties and the capitalist system they defend