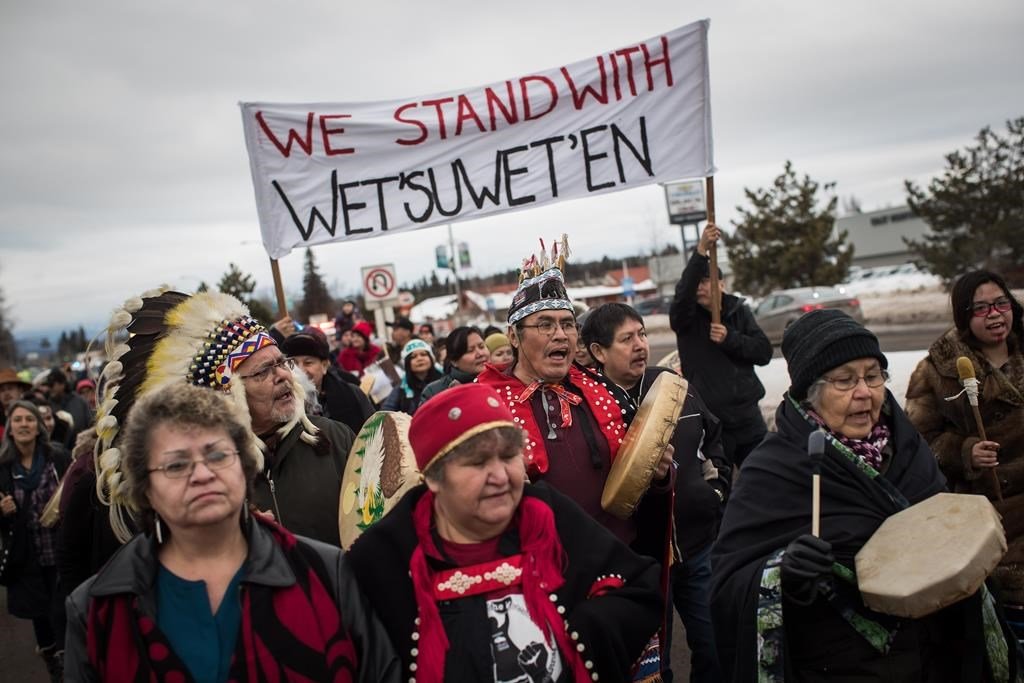 The meeting marked the first-ever meeting between RBC leadership and Indigenous land defenders, who have been resisting the controversial fracked gas pipeline for a decade.

At the meeting, the following demands were issued to RBC, with a 2-week deadline of March 11: (The bank’s annual shareholder meeting takes place on April 7):

“Today, we told RBC leadership directly that the bank’s financing of the Coastal GasLink pipeline threatens our medicine, our water, our ancestral lands, our culture and our homes. Our sacred headwaters, the Wedzin Kwa river, is the lifeline for our people, and it’s profoundly at risk. Financing Coastal GasLink is the exact opposite of reconciliation. The fracked gas pipeline violates our hereditary title, and has led to years of RCMP violence and harassment of peaceful Indigenous land defenders and the forced removal of Wet’suwet’en peoples from their territory.”

“The bank’s leadership seemed open to hearing our experiences and to the opportunity we’re giving them to do the right thing. We’ve been crystal clear: RBC must divest from this toxic project, which threatens Wet’suwet’en land, air and water, and steamrolls Indigenous rights. Money doesn’t have a conscience. The question is: will RBC do the right thing and divest, or will RBC’s reconciliation statements remain empty promises? The proof will be in the pudding.”

Coastal GasLink and the related export terminal, LNG Canada, is the largest fracking project in Canadian history. The 670-kilometre pipeline would cross 206 ecologically sensitive waterways and ship up to 2.1 billion cubic feet (bcf) (with the potential for delivery of up to 5 billion bcf/d) of methane gas to be transported via this pipeline daily to LNG Canada’s terminal for export.

With an estimated CAD $6.6 billion price tag, Coastal GasLink reached financial close in April 2020. RBC is among top commercial banks that provided the project with working capital, including CAD $275 million in project finance, a co-financed $6.5 billion loan, a $40 million corporate loan, and $200 million in co-financed working capital – while acting as financial advisor for the pipeline.

RBC also holds over 85 million shares in the project’s parent company, TC Energy, about 8.6% of the company. RBC not only finances TC Energy; it’s deeply invested in the company, and doubly exposed through the Coastal GasLink pipeline.

Gidimt’en Checkpoint Spokesperson Sleydo’ (Molly Wickham) closed the meeting by sharing footage of RCMP police violence and arrests against peaceful Indigenous land defenders over the last three years, as recently as November 2021. In 1997, the Supreme Court of Canada confirmed Wet’suwet’en Hereditary Chiefs as rightful title holders over their unceded territories. Wet’suwet’en Hereditary Chiefs never consented to pipeline construction through their territories, and over $21 million has been spent policing Wet’suwet’en people.

The forced industrialization and police militarization of Wet’suwet’en land is a violation of Canada’s international obligations outlined in the United Nations Declaration on the Rights of Indigenous Peoples (UNDRIP), which Canada made into law in 2021.

The United Nation’s Committee for the Elimination of Racial Discrimination (UN CERD) has repeatedly condemned the Coastal Gaslink project, urging the Canadian state to halt the project, seek Free, Prior, and Informed Consent (FPIC) from the Wet’suwet’en Hereditary Chiefs, urging police to stand down on Wet’suwet’en lands and to “immediately cease the forced eviction” of Wet’suwet’en people.

In September 2021, RBC joined the Glasgow Financial Alliance for Net Zero (GFANZ) – a coalition of financial institutions committed to accelerating economic decarbonization. Yet, between January and October 2021, RBC provided fossil fuel companies with $23.9 billion in loans and underwriting and $51 billion in investments.