Above Photo: Chief Na’moks of the Tsayu Clan says that provincial and federal officials have assumed and presumed authority over Wet’suwet’en territory, even though this has never been ceded by anyone.UNIST’OT’EN CAMP

(Warning: This commentary is longer than articles that normally appear on media websites.)

Tensions continue to run high over the 670-kilometre Coastal GasLink pipeline project, which has been approved by the federal and B.C. governments, as well as by 20 elected First Nations councils along the route.

It’s become a defining moment not only in the evolution of Indigenous rights, but in the future of B.C.’s NDP government and Canada’s oil and gas industry.

That’s because this pipeline is a key part of a $40-billion capital project that includes the huge LNG Canada plant near Kitimat.

Should this proceed, it will gobble up an increasingly large share of B.C.’s shrinking carbon budget in the years to come.

That will have a significant impact on businesses and people living across the province.

This is because they will be required to make even greater cuts to their emissions to meet B.C.’s legislated targets. (See chart below.)

Conversely, if Indigenous activists and their allies succeed in thwarting the $6.6-billion Coastal GasLink pipeline, it could give momentum to those trying to stop the even more costly $9.3-billion Trans Mountain pipeline expansion.

TMX, as that project is often called, will have more downstream carbon-dioxide-equivalent emissions per year than the entire province on an annual basis. That’s to say nothing of the upstream emissions.

The NDP government insists that it’s going to meet its greenhouse gas emission targets even as it is offering about $6 billion in subsidies to the carbon-spewing LNG Canada project.

Wet’suwet’en hereditary chiefs, on the other hand, want to halt a crucial component, the Coastal GasLink pipeline. Without this, there would be no gas to liquefy for export.

And the hereditary chiefs have been supported by large demonstrations in many other communities across the country.

“Two months ago BC committed to #UNDRIP! It’s time for @jjhorgan and the @bcndp government to honour that commitment on Wet’suwet’en territory!”#YouthClimateStrike leader @EJburian speaking now in #solidarity with the #Wetsuweten.#WetsuwetenStrong #NoTrespass #ClimateJustice 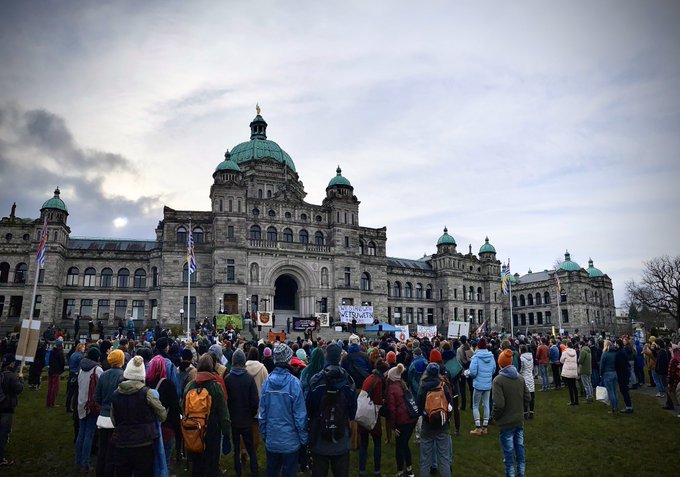 47 people are talking about this

On January 8, the hereditary chiefs met with RCMP Deputy Commissioner Jennifer Strachan, who was sworn in last June as the B.C. Mounties’ commanding officer.

The RCMP has a large force on traditional Wet’suwet’en territory and is responsible for enforcing a B.C. Supreme Court injunction obtained by the company.

The hereditary chiefs say they’ve asked the RCMP to “stand down and refrain from enforcing the injunction order until nation-to-nation talks can occur with the provincial and federal governments to address infringements to Wet’suwet’en rights and title”.

Presumably, these nation-to-nation talks would take place outside the normal framework of the elected chiefs and councils, who derive their authority through the Indian Act.

So, in a way, the hereditary chiefs are challenging the very structure that has guided discussions between governments and First Nations for decades.

For instance, the national chief of the Assembly of First Nations, Perry Bellegarde, is elected by the elected chiefs across the country.

In addition, the hereditary chiefs have asked the RCMP not to use any force or lethal weapons against the Wet’suwet’en people and to remove a remote RCMP detachment on traditional territory.

“Currently, the RCMP has adviced local helicopter companies not to fly into Unist’ot’en territory, endangering the safety of Wet’suwet’en people and guests at the Gidimt’en Access Point and Unist’ot’en Village,” the hereditary chiefs said in a statement on January 11.

The hereditary chiefs’ statement was issued after the UN Committee for the Elimination of Racial Discrimination expressed its concern last month about the Coastal GasLink, Site C dam, and Trans Mountain pipeline projects proceeding “without the free, prior and informed consent of affected Indigenous peoples”.

The UN committee called upon all these projects to be halted until this was done. And it also urged that Canada guarantee that no force will be used against the Wet’suwet’en, who are fighitng the Coastal GasLink project, and the Secwepemc, who are opposing the Trans Mountain project.

On Friday (January 10), Govender issued a series of tweets supporting the UN Committee on the Elimination of Racial Discrimination’s position.

In my lifetime, there has never been a more important time for Canada to demonstrate support for institutions of democracy. As international institutions face attacks from leaders who shirk accountability, our responsibility to respect these institutions grows stronger. 1/7

This week, the UN Committee for the Elimination of Racial Discrimination (CERD) called for Canada to halt three resource projects until free, prior and informed consent is obtained from all Indigenous peoples impacted by the projects. (FPIC). 2/7

41 people are talking about this

As a signatory to the Convention to End Racial Discrimination, Canada has obligations to the #CERD. Moreover, BC & Canada have — or plan to — legislate #UNDRIP. As such, we have obligations to ensure FPIC exists for all impacted Indigenous groups before projects impact lands. 3/7

CERD’s statement raises the alarm about the escalating threat of violence against Indigenous peoples in B.C. Indigenous peoples who oppose development projects on their traditional territories should never be met with violence for peaceful opposition. 4/7

25 people are talking about this

I join CERD in urging Canada to immediately cease the forced eviction of Wet’suwet’en and #Secwepemc peoples, to prohibit the use of lethal weapons, and to guarantee no force will be used against them. This is a matter of fundamental human rights. 5/7

Canada cannot simultaneously vie for a seat at the Security Council while ignoring their obligations to other parts of the UN. It’s critical to the future of human rights that Canada and BC cement the credibility of our institutions by meeting our obligations. 6/7

41 people are talking about this

Canada cannot simultaneously vie for a seat at the Security Council while ignoring their obligations to other parts of the UN. It’s critical to the future of human rights that Canada and BC cement the credibility of our institutions by meeting our obligations. 6/7

28 people are talking about this

Meanwhile, the Mounties have said that they’re conducting a criminal investigation of safety hazards near where the Coastal GasLink pipeline is being built.

For its part, the company is trying to play up the role of Wet’suwet’en people who are working on the project. This conveys an impression that the pipeline has broad support among Indigenous people.

Meet Edward, a member of the #Gitdumden Clan. He’s one of many proud #Wetsuweten people working on the project. Let’s listen to his perspective. #CoastalGasLink 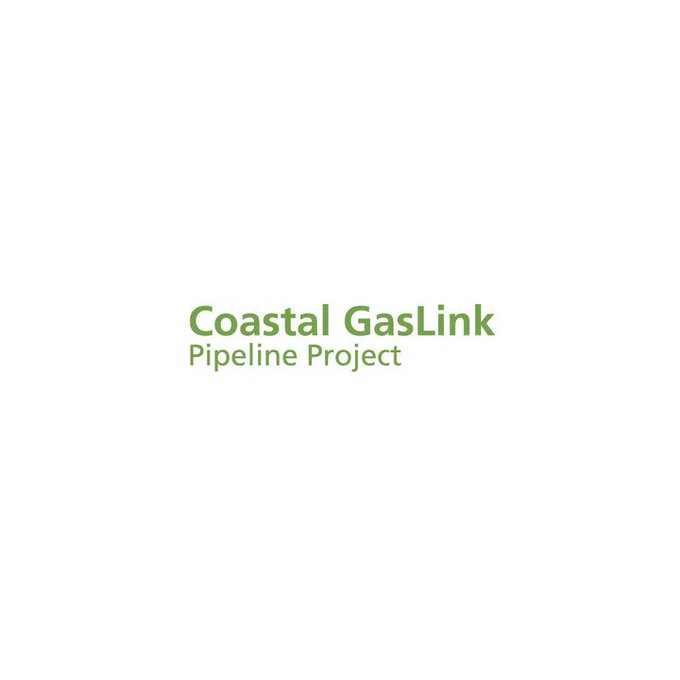 139 people are talking about this

Earlier this week, the company issued 72 hours’ notice for people to remove obstructions created by the pipeline’s opponents.

Today, the hereditary chiefs granted Coastal GasLink one-time access to shut down and winterize Camp 9A.

Where things go from here

If the RCMP violently suppresses the Indigenous protests, it will cause an uproar around the world.

Demonstrations would likely occur outside Canadian embassies and derail Justin Trudeau’s repeated efforts to portray himself as a progressive world leader and friend of Indigenous people.

The B.C. NDP, which is clinging to a minority government, could expect to come under intense criticism from its traditional supporters if the Mounties move in.

That’s because Premier John Horgan is inextricably linked to the LNG Canada project, which the Coastal GasLink project will feed with natural gas.

There’s a possibility that NDP MLAs might be tempted to leave the caucus and sit as independents if the pressure becomes too intense.

At the very least, a violent police action could easily lead to the defeat of the NDP government in the next provincial election.

This is not 1995, when a former NDP attorney general, Ujjal Dosanjh, played hardball with Indigenous traditionalists at Gustafsen Lake.

Back then, the Gustafsen Lake incident probably helped consolidate NDP support in constituencies in the south and north Cariboo, Kamloops, and Prince George, ensuring the party’s narrow reelection in 1996.

That’s to say nothing of the legal consequences that would flow from an RCMP crackdown on the Wet’suwet’en occurring in the wake of the legislature passing the B.C. Declaration on the Rights of Indigenous Peoples Act.

But if the Mounties do nothing, that could spell the end of the LNG Canada plant. It’s already a precarious investment.

LNG prices in Asia have remained relatively low, with estimates of just US$5.30 per million British thermal units in February and US$4.75 per million Btus in March, according to Reuters.

That’s less than a third of what LNG prices in Asia were in the period following the Fukushima nuclear disaster in 2011. They actually peaked at US$17.20 per million Btus in June 2012 in Japan, where more than a third of LNG is burned.

The current prices are hardly a bonanza for the LNG Canada investors: Shell, Petronas, PetroChina, Mitsubishi, and KOGAS.

TC Energy recently announced that it is going to sell 65 percent of its interest in the Coastal GasLink project to KKR and Alberta Investment Management Company, which oversees 31 funds.

The longer this project is delayed, the less likely it will come to fruition, particularly as renewable sources of energy continue to become more economically viable.

The stakes are high for all the players, including environmentalists worried about rising carbon dioxide emissions in the atmosphere.

The NDP government hopped into bed with the LNG industry when it offered subsidies to enable the $40-billion LNG project.

At the time, few anticipated that actions by Wet’suwet’en hereditary chiefs might end up killing the project. Even fewer might have considered that this could actually assist in the reelection of that very same NDP government.