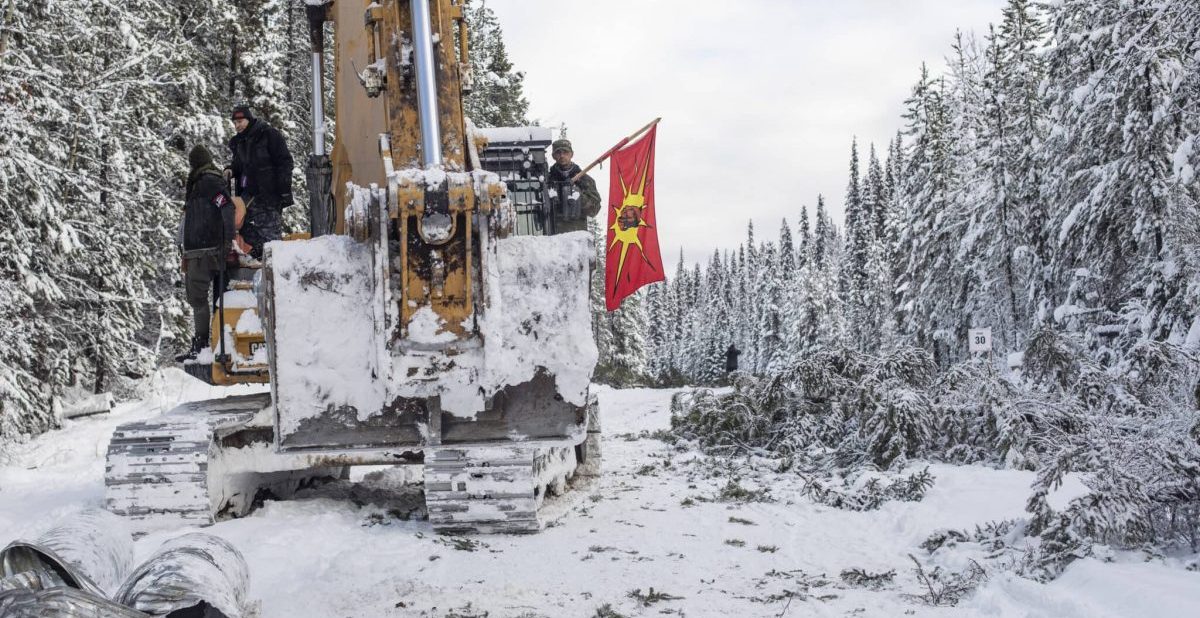 Above Photo: Haudenosaunee supporters ride a Coastal GasLink excavator as they help to close the road in Gidimt’en territory on Sunday, Nov. 14. Amber Bracken / The Narwhal.

URGENT UPDATE – Dozens of RCMP have deployed onto Wet'suwet'en territory

A charter plane full of RCMP have landed at the Smithers airport, with between 30 and 50 officers equipped with camo duffel bags.

The RCMP are blocking access to the Healing Centre. They are trying to starve us out again.

Today they stopped a driver with medical supplies & threatened to arrest them.

Call your representatives & tell them this is no way to treat Indigenous people. pic.twitter.com/m7ELFMQFEG

When the pipeline company failed to act on an immediate evacuation order, land defenders decommissioned a service road, cutting off access to project sites and work camps housing more than 500 individuals.

Wet’suwet’en land defenders and supporters say inaction from B.C. and Canada left them no choice but to enforce an eviction order against Coastal GasLink workers and deactivate road access to the project, a pair of measures that have prompted the provincial and federal governments to call for a peaceful resolution to the blockades.

“We were sending a clear message to the province, to Canada, and they weren’t acting on it — they weren’t hearing what we were saying — so we had to get a little bit louder,” Gidimt’en camp spokesperson Sleydo’ Molly Wickham told The Narwhal in an interview. “They’re destroying absolutely everything that is important to us in our territory. And they have been continuing to do work, despite the eviction order last year.”

The sole access route to Coastal GasLink project sites and work camps housing some 500 people was cut off after the company failed to act on an eviction order issued on Sunday. Tensions have been steadily escalating in Gidimt’en clan territory south of Houston, B.C., since September as the pipeline company began preparing to drill under the Wedzin Kwa (Morice) River.

Wickham, acting on the authority of the Wet’suwet’en hereditary chiefs, occupied the drill site in late September and was there on Sunday to issue notice to company workers.

“This is an immediate evacuation order for all Coastal GasLink employees and subcontractors,” Wickham, speaking on behalf of Dinï ze’ (Chief) Woos of Cas Yikh House, announced over a radio from an occupation of the site where the company plans to drill under the Wedzin Kwa (Morice) River.

Wickham and supporters, acting on the authority of the Wet’suwet’en hereditary chiefs, occupied the site in late September and tensions have been escalating since.

The 670-kilometre Coastal GasLink pipeline, owned by TC Energy, would connect natural gas producers in the province’s northeast with the LNG Canada facility currently under construction in Kitimat. The current conflict is in northwest B.C. where the approved project cuts through the heart of unceded Wet’suwet’en territory.

When the deadline lapsed, with no evidence of workers vacating the territory, land defenders seized a Coastal GasLink excavator and permanently closed the Morice River Forest Service Road — the only road access to two work camps housing more than 500 people.

The Wet’suwet’en eviction order isn’t new. It was first issued on Jan. 4, 2020, by the hereditary chiefs.

“Anuc ‘nu’at’en (Wet’suwet’en law) is not a ‘belief’ or a ‘point of view,’ ” the chiefs wrote at the time. “It is a way of sustainably managing our territories and relations with one another and the world around us, and it has worked for millennia to keep our territories intact. Our law is central to our identity. The ongoing criminalization of our laws by Canada’s courts and industrial police is an attempt at genocide, an attempt to extinguish Wet’suwet’en identity itself.”

Coastal GasLink did not respond to multiple requests for interviews and questions about whether the company pulled any workers and how many remain on site.

In a statement published on its website Nov. 15, the company wrote: “These unlawful actions have put our people in danger, stranding them at work lodges where supplies will run out in the coming days and limiting their access to medical care in the event of an emergency. An enforceable B.C. Supreme Court injunction is in place, allowing Coastal GasLink continued safe access in the area.”

“The RCMP is aware of the protest actions and we have, and will continue to have, a police presence in the area conducting roving patrols,” Madonna Saunderson, northern B.C. spokesperson for the RCMP, told The Narwhal in an email.

Human rights organizations, including the United Nations Committee on the Elimination of Racial Discrimination, have called on provincial and federal governments to immediately halt the Coastal GasLink pipeline project until the free, prior and informed consent of the Indigenous people directly impacted is given.

Earlier this year, Canada adopted the UN Declaration on the Rights of Indigenous Peoples (UNDRIP) into law, following the province, which legislated the declaration in late 2019. The declaration outlines the responsibilities of the government to uphold and respect Indigenous Rights and Title.

“Although the Coastal GasLink project and the [RCMP’s] E Division are under provincial jurisdiction, we recognize the seriousness of the current situation on the yintah (territory) and acknowledge that tensions are high,” Marie-Emmanuelle Cadieux, director of communications for Marc Miller, federal minister of Crown-Indigenous Relations, told The Narwhal in an emailed statement. “The way forward is through peaceful dialogue grounded in respect for all parties involved. This must be paramount.”

In a statement, B.C. Minister of Public Safety and solicitor general Mike Farnworth called “on all those involved to de-escalate the current confrontation and move quickly to eliminate the blockades through peaceful means.” The minister proceeded to outline the government’s frustration over a failure to reach agreements with hereditary chiefs.

“Our government is concerned about the health, safety and well-being of those workers as the obstructions on the roads prevent access in and out of the worksites. The right to protest does not extend to criminal actions.”

Wickham said the eight-hour notice provided ample time for the company to evacuate its workers.

“They didn’t even attempt to leave,” she said, adding they ensured any outgoing traffic was allowed to freely pass the blockades.

She explained the decision to close and protect all of Cas Yikh territory was the culmination of several events, including the arrest of neighbouring Lihkt’samisyu hereditary chief Dsta’hyl.

“It just got to the point that we’ve had enough and it seemed like the right time to enforce the eviction.”

Wet’suwet’en land defenders and supporters on Gidimt’en clan territory occupy a site above the Wedzin Kwa (Morice) River, where Coastal GasLink plans to drill and lay pipe under the river. One supporter is arrested, with RCMP officers using a Taser.

RCMP arrest another supporter, who was chained to the undercarriage of a school bus, after a protracted struggle which included the use of physical force.

Dsta’hyl and Kolin Sutherland-Wilson of neighbouring Gitxsan Wilp (house group) Git’luuhl’um’hetxwit are arrested, after a multi-day standoff between land defenders and Coastal GasLink workers. Sutherland-Wilson is released after being taken to the Houston detachment; Dsta’hyl is held overnight and released on Oct. 28.

Farnworth, in his statement, argued that the project is already authorized and includes agreements with elected chiefs and councils.

“The Coastal GasLink project has all the permits necessary for the work currently underway and the project is now over 50 per cent complete,” he wrote. “Coastal GasLink has project agreements with all 20 elected chiefs and councils of the First Nations along the pipeline route. The province has also secured agreements with the vast majority of First Nations along the route.”

The hereditary chiefs maintain their legal rights, including in Canadian law, supersede these agreements. The landmark 1997 Delgamuukw ruling in the Supreme Court of Canada confirmed Wet’suwet’en and Gitxsan Rights and Title, but it left wiggle room for governments to proceed with projects without first obtaining consent.

“Canada’s courts have acknowledged … that the Wet’suwet’en people, represented by our hereditary chiefs, have never ceded nor surrendered title to the 22,000 square kilometres of Wet’suwet’en territory,” the chiefs wrote in 2020. “The granting of the interlocutory injunction by B.C.’s Supreme Court has proven to us that Canadian courts will ignore their own rulings and deny our jurisdiction when convenient, and will not protect our territories or our rights as Indigenous Peoples.”

Merle Alexander, legal counsel for the B.C. Assembly of First Nations and member and hereditary chief of Kitasoo Xai’xais First Nation, told The Narwhal the province has not done enough to change its conduct in light of its UNDRIP legislation.

“It has this requirement to make all B.C. laws consistent with UNDRIP but the last two years has seen very little substantive progress on any key issue,” he told The Narwhal in an interview. “Meanwhile, and at the same time, the pressures for every government in Canada, including Indigenous governments, to try and rebuild or maintain their economies, has been going on. That’s provided this ability for the B.C. government to sort of de-prioritize implementing [the act].”

Farnworth’s statement said more than $1.25 billion has been invested in the Coastal GasLink project in B.C. so far, including “more than $1 billion being awarded to Indigenous-owned businesses or joint venture partnerships.”

‘They Have Every Good Reason To Be Afraid’

When the chiefs first issued the eviction order on Jan. 4, 2020, and blocked access to the territory, the response by police and government led to solidarity actions, under the banner of ‘Shutdown Canada,’ across the country and beyond. Rail and port blockades brought international trade to a standstill.

After the eviction order was reiterated on Nov. 14, Gitxsan supporters briefly blocked trains in the nearby community of Hazelton. Wickham predicted more will come, depending on how the government and police react to the eviction.

“If Canada and the province and [Coastal GasLink] and the RCMP don’t actually step up and start recognizing Wet’suwet’en Rights and Title, we are going to see another ‘Shutdown Canada,’” Wickham said. “I think that’s what they’re afraid of and I think they have every good reason to be afraid of that.”

Wickham said there’s growing discontent in Indigenous communities across the country and around the world.

Skyler Williams, a Mohawk Nation land defender who was involved in 2020 rail blockades on Haudenosaunee territory, reiterated his support of the Wet’suwet’en.

“We’ve become family — we care about each other, we lift each other up, we love each other,” he told The Narwhal in an interview. “With all of this rhetoric around the residential school survivors and the bodies in these unmarked graves across the country, if we’re going to tell those survivors that they can come home to their nations, come home to their family and the supports that community can provide, how can we do that without land? How can we do that when our rivers are polluted?”

The river, Wickham said, is what is motivating the land defenders to act now.

“We have the ability to drink water right out of our river,” she said. “That is a luxury that we don’t take for granted and that we’re willing to fight for.”