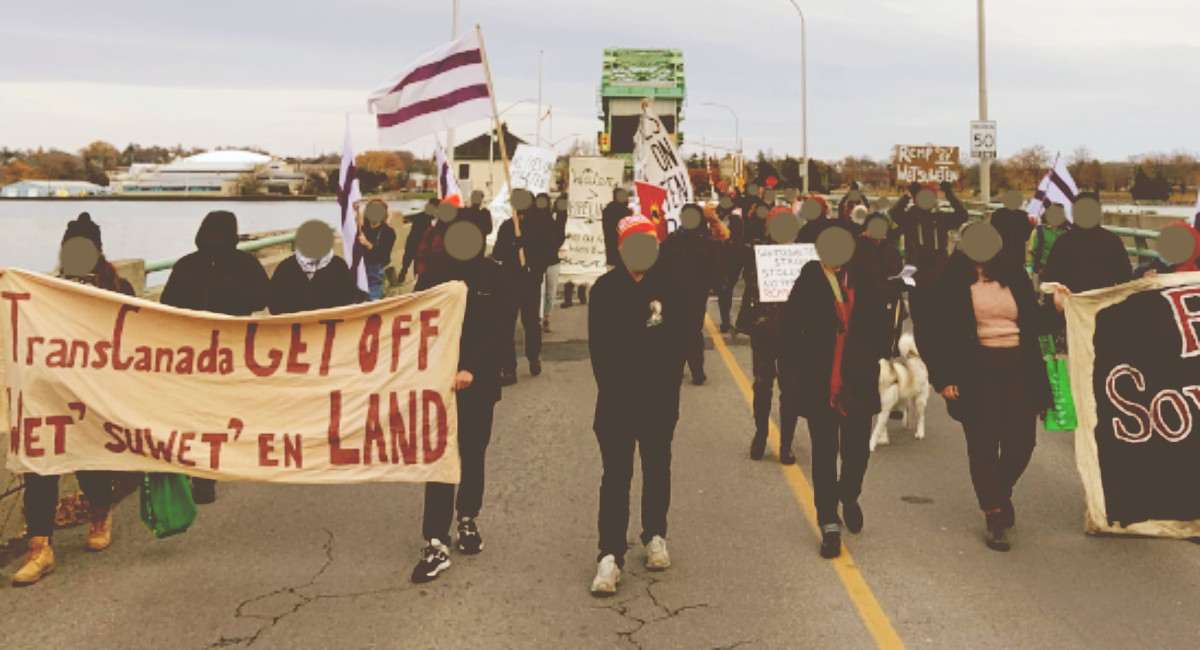 Above Photo: March and action in Kingston, Ontario in solidarity with ongoing Wet’suwet’en struggle. It’s Going Down.

Kingston, Ontario – A blockade shut down the LaSalle Causeway for part of Sunday afternoon.

The Causeway was unusable for nearly an hour due to the protest, before Kingston Police officers were dispatched to remove the crowd from the crossing between Kingston East and downtown.

After beginning at 1 pm, the rally moved on to the bridge around 1:45 and was gone before 3.

The demonstration was a show of solidarity in support of the Wet’suwet’en people, and in response to a recent police raid on the Gidimt’en Checkpoint.

The blockade joined several around the country, including a protest in Toronto that saw train tracks shut down for several hours.

This comes in the wake of continued and escalating RCMP presence, which on Thursday saw dozens of heavily armed police officers move in on a blocked stretch of access road, arresting fifteen. Among those fifteen arrested were two journalists documenting the standoff.

RCMP Sgt. Janelle Shoihet has been quoted saying “individuals who, following arrest, identified themselves as journalists” were included in arrests, however during the RCMP advance, a person holding a camera can clearly be heard identifying themselves as media.

Protestors have said the RCMP and Coastal Gaslink are using BC’s current flooding and environmental emergency as a convenient distraction to move on land defenders.

In response, supportive demonstrations documented under the hashtag #ShutDownCanada appeared in cities all over the country.

Kingston’s rally was organized by Mutual Aid Katarokwi/Kingston and attended by over 100 people at Ontario Street and Barrack Street before marching onto the Causeway.

Kingston Police tweeted about the protest just before 2:30, shortly after the first officer arrived on the scene to speak with demonstrators in an effort to disperse them.

In a video shared by Real Peoples Media, a responding officer can be witnessed trying to convince the crowd to get out of the road, telling them it’s illegal.

“Unfortunately we have to do this,” one protestor shouts back.

“This is the way we have to, because nobody’s listening.”

The blockade frustrated commuters hoping to use the Causeway, with one motorist seen in the same video throwing a traffic cone.

When more officers arrived in support, the rally dispersed from the Causeway with no arrests made.

Kingston Police tweeted that the Causeway was reopened as of 2:55.