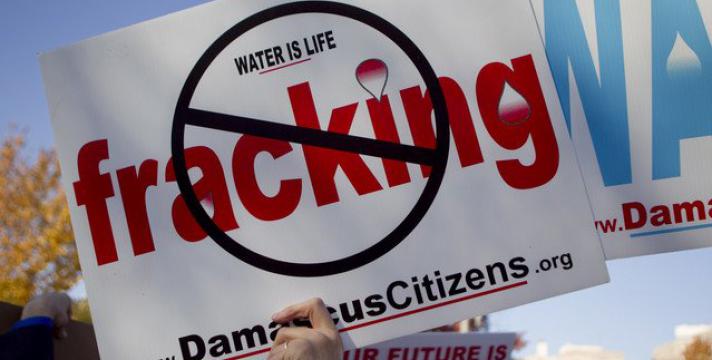 What A Secretly-Negotiated Trade Agreement Could Mean For Fracking

A trade agreement being secretly negotiated by the Obama administration could allow an end run by the oil and gas industry around local opposition to natural gas exports. This agreement, called the Trans-Pacific Partnership, is being crafted right now – and the stakes for fracking and shale gas are high.

While the vast majority of the opposition to fracking in the US has focused on domestic concerns — its impact on air and water, local land rights, misleading information about its finances – less attention has been paid to a topic of colossal consequence: natural gas exports.

At least 15 companies have filed applications with the federal Department of Energy to export liquified natural gas (LNG). The shale gas rush has caused a glut in the American market thanks to fracking, and now the race is on among industry giants to ship the liquefied fuel by tanker to export markets worldwide, where prices run far higher than in the U.S.

As drilling has spread across the U.S., grassroots organizing around unconventional oil and gas drilling and fracking has grown to an unprecedented level in many communities. Public hearings and town halls from New York to California have been flooded with concerned scientific experts, residents and small business owners and farmers who stand to be impacted by the drilling boom.

Drilling advocates have become increasingly concerned about how grassroots organizing has expanded over the past 5 years. “Meanwhile, the oil and gas industry has largely failed to appreciate social and political risks, and has repeatedly been caught off guard by the sophistication, speed and influence of anti-fracking activists,” one consultant warned the industry last year.

Some of the most resounding setbacks the drilling industry has faced have come at the state or local level. Bans and moratoria have led drilling companies to withdraw from leases in parts of the country, abandoning, at least for the short term, plans to drill.

But when it comes to natural gas exports – which many analysts have said are key for the industry’s financial prospects –independent experts and local organizers may soon find themselves entirely shut out of the decision-making process, if the oil and gas industry has its way.

Currently, before natural gas drilled in the U.S. can be exported to another country, the Department of Energy is required by law to determine if exporting the gas would be in the “public interest.”

Crucially, that process is open to public input. If, for example, a chemical company is worried that exporting gas abroad would drive up prices for the materials they need, they have an opportunity to weigh in. Members of the public can raise concerns about the community impacts of producing gas for export. Scientists can bring in data about the impact of gas exports on climate change, water consumption or pollution. And the Department of Energy must consider it all.

The process is an uphill battle for those who oppose exports – they bear the burden of showing that a project is not in the public interest. And the head of the DOE, Ernest Moniz, has made clear that he supports the use of natural gas as a bridge fuel – though he has also promised to give close scrutiny to all natural gas export applications.

But in some cases – and this may come as small surprise to many familiar with how the oil and gas industry is regulated — there’s a loophole. In 1992, hoping to fast-track natural gas imports to the U.S. from Canada, Congress passed an amendment to the Natural Gas Act. Thanks to the amendment, any LNG imports or exports to America’s free trade partners is automatically considered to be in the public interest – no hearing required, as long as that free trade agreement includes somethingcalled “national treatment for trade in gas.”

Right now, virtually every major natural gas importer lacks such an agreement. But the final rounds of negotiations the terms of the Trans-Pacific Partnership are underway. And President Obama, picking up a project first initiated by President George W. Bush, has set an October target for completing the talks.

These negotiations are taking place in near total secrecy. Although draft agreements have been written up, none have been made public. Only official U.S. “trade advisors” are allowed in on the ongoing negotiations.

Just who are those trade advisors? They are roughly 600 representatives from corporate America. They include organizations with heavy financial stakes in fracking, such as Halliburton, Chevron and the American Petroleum Institute. Conspicuously absent are advisors representing organized labor, environmentalists, or grassroots organizers.

With liquified natural gas selling for roughly $15 per million cubic feet in Japan – versus the $3.50/mcf that natural gas goes for domestically, the incentive to export gas to Japan is powerful, even after transportation costs are accounted for. And in the aftermath of the Fukushima nuclear disaster, Japan is even more heavily relianton natural gas, which it currently buys from countries like Russia, Australia and Indonesia. (Canada is currently courting Japan, or vice versa, about gas shipments as well.)

While little is known about what exactly the terms of the Trans-Pacific Partnership will be, according to the Sierra Club’s Ilana Solomon, the agreement is expected to apply to Liquefied Natural Gas. This will mean that exports to any partner countries will automatically be given a stamp of approval, without having to undergo the public hearings that are otherwise required.

LNG exports will drive natural gas prices up in the U.S. The applications currently before the Department of Energy would allow 45% of natural gas production to be exported, if they were all approved. The Energy Information Administration has estimated that more than 60 percent of exported gas would come from newly drilled gas wells. If America exported18 billion cubic feet a day, domestic gas prices could spike 47 percent by 2035, a team of researchers from Purdue concluded.

The Sierra Club predicts that after an 18th round of talks in Malaysia, which was held in July, sparking protests, and a final round in Indonesia in October, President Obama may send the final agreement to Congress for consideration.

If Obama “fast-tracks” to agreement – which is common for international trade arrangements – Congress can only vote yes or no, and cannot edit the final language.

Accelerating exports would be a major victory for the shale gas industry, as many drillers have been counting on higher gas prices to keep them solvent.

But opposition to the Trans-Pacific Partnership – and to the secrecy with which negotiations have been conducted – is growing. Groups like the Sierra Club, Food and Water Watch, and Public Citizen have been calling attention to the potential harm that the agreement could do. Democratic Sen. Elizabeth Warren of Massachusetts has been pressing the Obama administration to make the full details of the negotiations – which not even members of Congress can currently access – public.

“If transparency would lead to widespread public opposition to a trade agreement, Ms. Warren wrote in a June 13 letter to White House officials about the Trans Pacific Partnership, “then that trade agreement should not be the policy of the United States.”

Over the past few years, proponents of increased regulations on shale oil and gas development have faced unprecedented pushback from backers of the drilling industry. Op-Ed pages and financial writers have often highlighted the upshots of more fossil fuel extraction. Wall Street investors have talked up a bonanza in fracking. The White House has thrown its weight behind promoting oil and gas development, as part of their “all of the above” energy strategy.

If this is the political climate in Washington D.C. when natural gas prices have remained below $4/mcf, what will the political pressure look like when trade deals allow the industry to sell this gas abroad for $15/mcf or more?