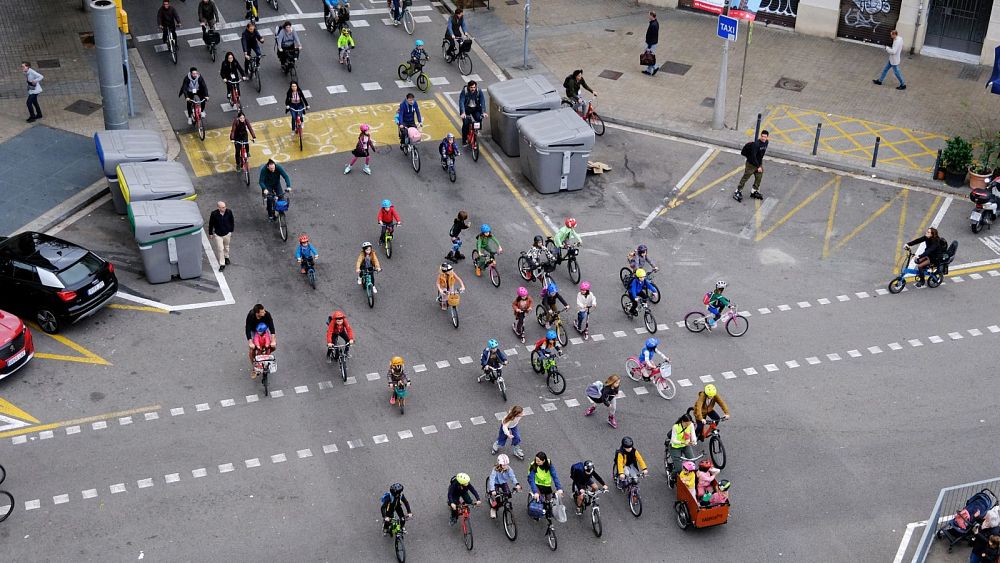 What Are Bike Buses And Why Are Kids ‘Jumping Out Of Bed’ To Join Them?

Barcelona’s bike bus, or “bicibus”, as the scheme is known locally, allows hundreds of children to cycle safely to school in a convoy, taking over entire streets in Spain’s second largest city.

The citizen-led project, supported by Barcelona City Council, began in March 2021 with one route in the Sarria neighbourhood.

It now has 15 routes and has inspired similar schemes in the Scottish city of Glasgow and in Portland in the United States.

Eight-year-old Lena Xirinacs joins the Eixemple route every Friday with her father, who is one of the volunteers ensuring that the children are safe on the road.

“She wakes up with joy. I could use it as an excuse every day so that she jumps out of bed,” Pablo Xirinacs said.

The Eixample route starts at 8.30 am and covers 2.5 kilometres (1.55 miles) in 25 minutes, dropping children at three schools along the way from Monday to Friday. Not all routes operate on a daily basis.

Road safety is ensured by a Barcelona police car escort and vigilant parents like Xirinacs, one of 80 parent volunteers in the city, who join the convoy.

Organisers estimate that more than 700 people joined the different routes during the 2020-21 school year, which translates into about 15,000 commutes to different Barcelona schools over that time.

“We anticipate that children who participate in ‘bicibus’ will be more likely to ride a bike, have better cycling habits, more sustainable transportation habits, and we think they will change the travel patterns of their family as well,” Honey-Roses said.

Where Else Has Bike Buses To School?

Spain isn’t the only European country where children are cycling to school together en masse.

The Netherlands – well ahead of the pack when it comes to all things two-wheeled – not only has the infrastructure to support convoys, but also singular vehicles powered by cycling children.

Rouen city in northern France also launched a pedal-powered school bus back in 2016.

In Glasgow, the council has developed traffic-stopping technology to ensure the Shawlands bike bus safe passage.

The Ultra-Smart Cycle System, mounted on the lead rider’s bike, uses a military-grade encrypted signal that, when pressed on approach to the junction, sets a specially timed traffic light cycle in motion to hold traffic for 45 seconds. Enough time to get all of the riders through.