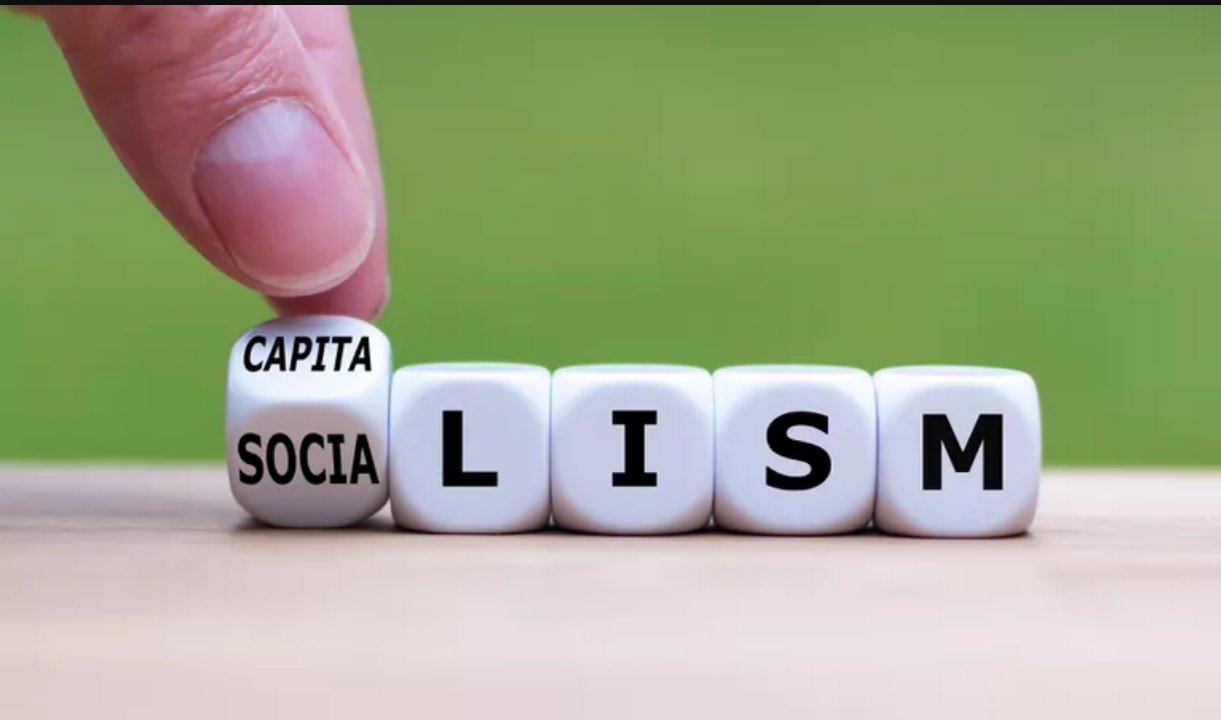 What Are The Fundamental Differences Between Capitalist And Socialist Democracy?

Above Photo: Hand flips a dice and changes the word “Socialism” to “Capitalism”, or vice versa. (Fokusiert / Getty Images).

Staying True To The Theme Of Democracy, This Article Is An Amended Speech That Analyzes The Differences Between Capitalist Vs. Socialist Democracies And Advocates A Defense Of The Latter.

The United States hosted a “Summit for Democracy” on December 9th and 10th in an obvious attempt to legitimize its unipolar and hegemonic claim of leadership over the so-called “rules-based international order.” While on the surface this appeared to be an unproductive move on the part of the world hegemon, it aligned well with the U.S. strategy of cloaking its aggressive and exploitative policies under the guise of “democracy.” Joe Biden’s administration has repeatedly hyped the differences between “autocracy” and U.S.-led “democracy.” So-called allies were summoned to give the U.S.’s vision for democracy credibility on the international stage.

Friends of Socialist China saw the Biden administration’s public relations stunt as an opportunity to discuss the distinctions between capitalist democracy and socialist democracy. There is no higher form of capitalist democracy than in the United States. The United States has been the wealthiest capitalist country in the world since the end of World War II. Since then, U.S. elites across the political spectrum have employed the word “democracy” as a key justification for its domestic and foreign policies. This has involved a diligent avoidance of any scrutiny of the claim that capitalist democracy represents a universal system for all peoples and nations.

Scrutiny, of course, runs the risk of exposing the class character of capitalist “democracy,” the most glaring contradiction of the system. Capitalist democracy is a democracy of, by, and for the rich and the powerful owners and managers of capital. Democracy in such a context serves a minority of the population at the expense of the vast majority. As Vladimir Lenin put it in State and Revolution, “Democracy for an insignificant minority, democracy for the rich — that is the democracy of capitalist society.”

Ample evidence of this contradiction exists in all spheres of U.S. political and economic life. Nearly half of the U.S. cannot afford a $400 emergency as wages stagnate and jobs fail to meet the cost of living. A half million people sleep on the streets or in homeless shelters at any given moment. The situation worsens when race is factored into the analysis. The median Black family has just $1700 to its name. Meanwhile, capitalists such as Jeff Bezos have enjoyed record profits amid a global pandemic that has plunged the U.S. into its second economic crisis in thirteen years.

While voting is held in the highest regard under capitalist democracy, none of the aforementioned material conditions were voted in by the people. Matters of policy are decided well before the exercise of voting is complete. Representatives elected to govern over capitalist democracy are almost entirely bound to the dictates of capital. In the United States, influential politicians such as President Joe Biden, House Speaker Nancy Pelosi, and Senator Kyrsten Sinema receive enormous donations from Wall Street financial institutions, weapons manufacturers, and for-profit health insurance and pharmaceutical corporations. As Lenin again surmised, the people essentially vote for whichever representative of the ruling class will oppress them every two to four years.

A common error for Western and American observers, even the most progressive ones, is to confuse socialist democracy with social democracy. The age of austerity in the West has led to a relative comeback of a politics of social welfare which is often confused with socialism proper. However, there is a marked difference between Western social democracies like that which exists in Sweden and socialist democracies such as that which exists in China. In Sweden, private capital dominates the governance system. In China, the state plays a leading role in economic development under the leadership of the Communist Party.

The historic crisis precipitated by the COVID-19 pandemic has placed a spotlight on how the fundamental differences between capitalist and socialist democracies are a matter of life and death. Socialist democracies all over the world have fared far better in addressing the pandemic than so-called capitalist democracies. China’s efficient and government-led effort to curb transmission has saved more than a million lives from premature death from COVID-19. Sweden’s privatized elder care system and the government’s decision to keep the economy fully operable from the outset has led to a death rate per million in the population of nearly 1,500. For comparison, China has just three deaths per million in the population.

Despite their near singular success in protecting human life from a deadly pandemic, it is fashionable for the U.S. and its Western allies to depict China and other socialist democracies as devoid of popular participation in the governance of society. The term “authoritarian” is repeated ad nauseam to confuse the Western psyche into thinking that their narrow capitalist democracies represent the apex of popular power. Yet China’s successful pandemic response would have been impossible without robust and democratic popular participation. In Wuhan alone, party organs and mass organizations mobilized more than a million volunteers to assist residents with their basic needs during a months-long city-wide lockdown. The central government indeed directed rapid attention to the employment of pandemic control measures but it was ultimately the people, under the leadership of the communist party, that had to carry them out.

Socialist democracy is different from capitalist democracy in both character and form. Socialist democracy doesn’t privilege the political freedoms of the individual above all else. Rather, socialist democracies set out to secure the right to housing, healthcare, education, employment, and life itself as key priorities of governance. This makes historic sense. Socialist revolutions have occurred in the context of colonized and underdeveloped nations, thus making the development of the productive forces and the economic wellbeing of the people paramount to stability and survival within a hostile global situation. Existing socialist democracies include China, Vietnam, Cuba, the DPRK, and Laos—all of which emerged from the devastation of war and colonial domination in the 20th century.

Socialist democracy is a model of substance. While different in form depending on the national and economic context of the society in question, socialist democracies have key features in common. These include the leadership of the communist party, a common history of struggle against foreign imperialism and colonialism, and the successful transfer of the means of production from the oppressor to the oppressed classes. Socialist democracy has allowed Cuba, for example, to ensure that more than 90 percent of its population own their home and 100 percent have access to free, quality healthcare. It has also allowed Vietnam and Laos to survive the devastation wrought by destructive U.S. wars and make significant headway in eliminating extreme poverty. And it’s allowed the DPRK to defend itself from ongoing military provocations and sanctions enforced by the United States.

Perhaps there is no better area of study than geopolitics to observe the superiority of socialist democracy for humanity. Capitalist democracies have histories riddled with centuries of colonial adventurism and imperialist war. From 1945-2011, an estimated 20-30 million people have been killed around the world as the result of U.S. military interventions. Capitalist democracies from the U.S. to the U.K. continue to violate international law on a regular basis in order to satisfy their own economic and political ends. Afghanistan, Libya, Syria, and dozens of other countries find themselves mired in poverty and instability as a result of direct interference from so-called capitalist democracies.

In other words, the United States and its so-called democratic allies engage in a wholly undemocratic framework of unipolarity in world affairs. Capitalist democracies routinely place their own interests above those of humanity and use force to resolve disputes or satisfy their political and economic agendas. On the other hand, socialist democracies adhere to international law and champion a multipolar orientation to global governance. None of the existing socialist democracies have waged a war of aggression in the modern era. In fact, all of them have been at the forefront of demonstrating the true benefits of international cooperation and solidarity.

The examples are numerous. They include China and Cuba’s joint ventures in biotechnology which helped produce antivirals that provided immense help in China’s early fight with COVID-19. China’s Belt and Road Initiative must also be noted since the massive infrastructure plan has already brought enormous benefits to underdeveloped countries around the world—the Sino-Laos high-speed rail line being just one recent breakthrough. The provision of nearly 2 billion COVID-19 vaccines from China has offered hope to poor countries around the world unable to access expensive vaccines produced by Western manufacturers. In March 2021, socialist democracies led the way in forming the Groups of Friends in Defense of the UN Charter, a significant development in forging a future of world peace.

In sum, Biden’s Summit for Democracy was nothing more than a projection of the narrow form of democracy championed by the world’s foremost imperial hegemon. The Summit for Socialist Democracy, however, emphasizes the promises and prospects of the democratic governance models offered in the struggle for socialism. A greater understanding of the development trajectories of all peoples and nations around the world is of critical importance toward collectively resolving the pressing problems facing the human race in the 21st century and beyond. From this vantage point, socialist democracies set an example worthy of attention and defense from the incessant propaganda leveled against them by the declining Western world order led by the United States.