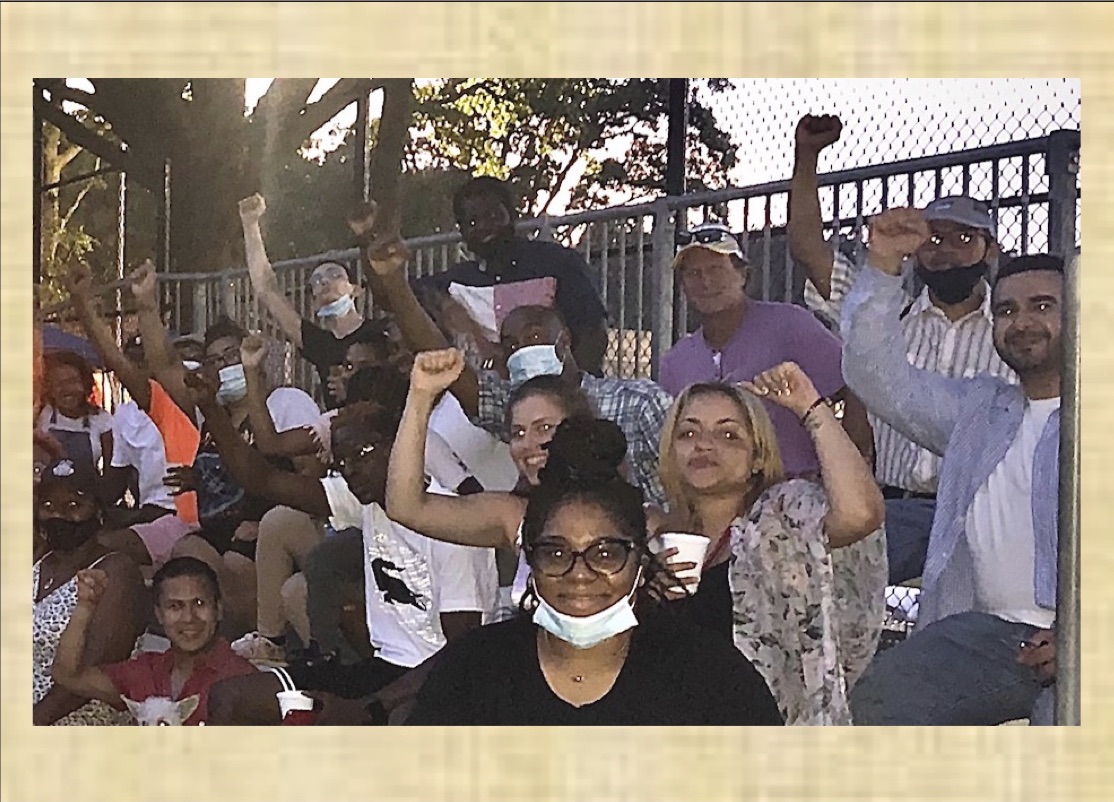 What Can Organizers At Amazon Learn From Walmart?

Above Photo: Amazonians United cookout near a worksite to bring petition signatories together to build solidarity going into peak season. They were chanting “$2” because one of their demands was to keep the $2 pandemic hazard pay. Photo courtesy of Amazonians United.

“Amazon is the epoch-defining corporation of the moment in a way that Walmart was two decades ago,” said Howard W, an Amazon warehouse worker and organizer with Amazonians United, a grassroots movement of Amazon workers building shop-floor power. What can organizers at Amazon learn from the Walmart campaigns in the 2000s? And what can these two efforts teach us about organizing at scale? Unions haven’t successfully organized an employer with more than 10,000 workers in decades, so getting to scale is one of the most pressing challenges for the social justice movements.

To explore these questions, Howard was joined by Wade Rathke, who, as chief organizer of ACORN in the U.S. from 1970 – 2008, anchored a collaboration among ACORN, the Service Employees International Union (SEIU) and the United Food and Commercial Workers (UFCW) that aimed to organize Walmart. Since 1980, Rathke has also served as Head Organizer for Local 100 of the United Labor Union, which represents service workers in Arkansas, Texas and Louisiana. Organizing Upgrade Executive Editor Alex Han facilitated the conversation, with participation from International Longshore and Warehouse Union Organizing Director Emeritus Peter Olney. The 90-minute dialogue ranged from the philosophical to the granular. We’re bringing it to you in three parts, beginning with a look at worker organizing. Part 2 focuses on relations with existing unions, and Part 3 on building broader community campaigns.

Alex: Wade, you worked on a project that approached organizing Walmart from a lot of different angles. Can you tell us a little about that?

Wade: We were trying to determine whether Walmart workers were willing to join a union and whether—just as importantly—they were willing to join a union that was very deliberately not going to file for an NLRB election, and made no promises of collective bargaining. We wanted to go directly to workers in the same way that ACORN would go directly to people in the community and ask them to join the organization to take action on the issues they saw in the community. We would go directly to Walmart workers and ask them if they wanted to take action on issues they saw in the workplace, whether that was hours, scheduling, wages, etc., etc., much in terms of shop-level action.

At that particular time—you’re talking about early 2005—4% of Walmart’s gross came from Florida, so it was one of the strongest states. We chose the I-4 corridor running between Orlando and Tampa-St. Pete, about 21 counties, a whole bunch of stores that they had already planted, but also a serious piece of expansion that they had proposed there. We built an organizing staff. ACORN already had an office in Orlando as well as in the Tampa area. One of my key associates and brothers was based in St. Petersburg so we knew people. We knew the turf. We were able to get established very quickly.

Obviously, we didn’t have a list of Walmart workers. We got the Florida voter list, and then we did a query to pull out all the addresses. At that time, it was populated with addresses and phone numbers, and we pulled out all the ones for families making less than $50,000. We did a simple robo-dialed prompt system where we called people who we thought were likely Walmart workers asking if they had worked for Walmart or had people in their family who worked for Walmart. There might be rights and benefits. If they were eligible, press 2, if they were interested, press 1. They’d press 1, give us their address and we’d come visit with them.

We had about 20 organizers so every night we would collect all the yesses, put people on the doors. The organizers in that piece of turf drove hundreds of miles sometimes to do three or four visits, and sometimes were lucky to actually complete any visit. For all of the union drives I’ve ever done, and there are many, we had the highest percentage of sign-ups on visits that we’d ever had, somewhere near 63% of the people who were Walmart workers who we actually got to visit would immediately sign up, and they were willing to join and pay dues. They signed up for the Walmart Workers Association. It was a membership card much like the ACORN membership card. They agreed to pay $10 US in dues per month, in an open-ended bank draft.

And that was surprising to me, how much interest and heat there was in the workforce about wanting to join this. And, once again, we were saying we’re not going to file for election. There is no collective bargaining. We’re not promising a damn thing other than you come together with your fellow workers. You can take action on the grievances and issues you have.

‘We Run The Place’

Alex: Howard, can you tell us about the concept around Amazonians United, the kind of organizing that you’re doing, and what’s happened as a result of that organizing?

Howard: The concept behind Amazonians United is that building collective power on the shop floor is foundational to changing the circumstances of workers at Amazon. Our power in making Amazon run is the thing that is needed to make any big change. We realize that Amazon is known for its huge size but also its far reach, so to make the biggest and most fundamental changes in it, the work will have to be more complex and involve more people that are touched by Amazon in more ways. But without Amazon workers forming that base, a lot of the rest of that work probably won’t go anywhere because we have the strongest position, because we run the place.

We’ve been organizing Amazonians United for about three years now. There are workers involved in Amazonians United that have been there longer than that, but we’ve been working as Amazonians United for about three years. In that time, Amazon has had a lot of press about its working conditions, its safety record, the intensity of the work, the inhumanity of a lot of the working conditions, and not a lot has changed. But when we in our warehouses have come together and done actions even as simple as a petition, and getting the super-majority of our coworkers to sign on to a list of demands, we’ve seen local management—which pretty consistently across the whole Amazon network is aloof, condescending, treats us like robots half the time and children the other half of the time—immediately sit up and, for the most part, rush to meet our demands, especially when they are demands that are within the warehouse. We’ve found it more difficult to make progress on bigger demands, like demands for a raise or demands for things that are really happening at a corporate level. Our work has been mostly warehouse by warehouse.

And so then finally our folks started coming together and forming up as a crew, passed around a petition, got a super-majority of coworkers signed on, and confronted management with it at one of those standup meetings that started a shift. The manager became visibly scared, immediately got on the phone to his supervisor, immediately left to the store to get bottled water. Within the next week, clean water lines were being run throughout the warehouse and fresh water was being provided. In a lot of ways, it’s depressing that we had to fight for it, but it shows the power of workers to turn circumstances around in the warehouse very quickly in these cases.

The New York warehouse that’s organized into Amazonians United was actually the first warehouse where there was an acknowledged case of the coronavirus in Amazon’s network. And the reason it was the first acknowledged case of the coronavirus is not that Amazon came out and said it. Workers there were organized and when one person got the news that they had tested positive on a very thinly staffed afternoon shift, they told a couple of their coworkers as they were leaving. Those coworkers passed it around to the rest of the organized crew, and the night shift that was coming in a few hours later.

A few of our folks showed up early, stopped everyone from coming in, told them what had happened. This was back when we didn’t know how the virus was passed. There was an impromptu rally in the parking lot. Workers refused to go in until serious cleaning had been done. Amazon agreed to shut the place down for two days, do cleaning and pay everybody. And that then began Amazon’s actual serious response to COVID. I can tell you from working in the warehouse that there was a real switch that was thrown at some point, in that Amazon was very clearly pretending it was not a problem and then all of a sudden, they started really taking it seriously.

In Chicago, the crew actually walked out for several days, demanding a serious response to the coronavirus. And that was one of the times a worker organization has been paired with community support, because when workers were walking out and were picketing the workplace, community members organized a car caravan to come by and show support and also create a bit of a jam for all the delivery vans trying to get in and out.

When we start organizing, we build up our organizing committees, we take action, we start changing the narrative in our warehouse. I think a lot of folks in warehouses assume that the problems that we have are unique to us and that everybody else has it better. And that clearly Amazon, leading light of the modern economy, the whole thing couldn’t be run as poorly and be constantly broken and duck-taped together as our warehouse, right?

One of the things that we’re able to do as a network is meet each other as organizing committees and bring each other together as workers—not just as the organizers who are talking to each other a lot more, but as everybody who is in some way involved in the organizing in the warehouse. And they come and you can just talk shop.

Part of our work is building a meaningful community at work and a meaningful project for people to help them stick around. ‘Cause yeah, like the warehouses are very alienated places, a lot of them, right? People cycle through a lot. A lot of times the work is very isolated. People get ground down so much by the work that when you go on break everyone’s on their phone, talking to the people they really care about. In some cases, there is community there; in some cases, it takes people very intentionally being friendly, sharing food with each other, inviting people to cookouts and organizing potlucks and whatnot. Yeah, and building that community that then can be the basis for fighting for our lives.