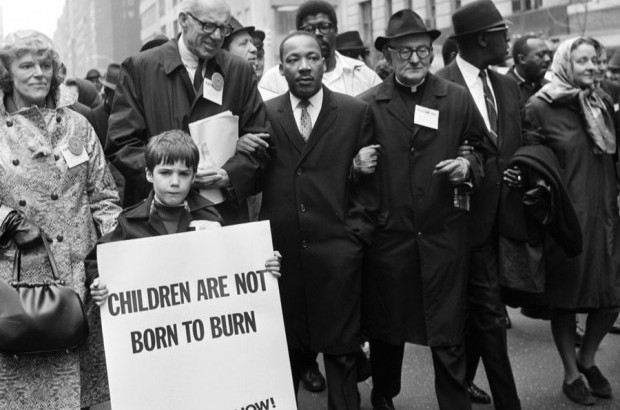 What Can We Learn from MLK About US Elections

Above Photo: From media.npr.org. Matin Luther King, Jr. and Dr. Benjamin Spock leading a peace march together in New York City. There was an effort to get the two of them to run together for president and vice president in 1968.

Note: The United States is in a crisis of democracy. The two political parties that represent the oligarchs and big business interests are both in a crisis of legitimacy and division. What should the people do? Where do we go from here?

Rev. Dr. Martin Luther King, Jr. never was a partisan Democrat or partisan Republican. King maintained a policy of not publicly endorsing a U.S. political party or candidate and remaining an unaffiliated voter, saying “I feel someone must remain in the position of non-alignment, so that he can look objectively at both parties and be the conscience of both—not the servant or master of either.”  He said “Actually, the Negro has been betrayed by both the Republican and the Democratic party.”

One way to gauge his understanding of the role of elected officials, is to examine his consideration of running for president in 1968. In 1967 King had come out against the Vietnam war and was raising questions about poverty and capitalism. No longer was he only a leader on civil rights but on war, racism and economic justice. The discussions about King running for president began on January 5, 1967 when former National Students Association leader and King ally, Allard Lowenstein, Yale chaplain William Sloane Coffin and four-time Socialist presidential nominee Norman Thomas met with King and his friend, New York attorney Harry H. Wachtel to discuss Dr. King running for president.  The talks went on for months.

According to John Gizzi on “August 31 1967, more than 3,000 liberals, Vietnam War opponents, and civil rights and community activists met in Chicago for a five-day National Conference for a New Politics. The ticket being considered for president was King, and pediatrician and activist, Dr. Benjamin Spock” as vice president. King was an unaffiliated voter, an independent not registered with either the Republicans or Democrats in Georgia so a third party run made sense.

King decided against the presidential run, in the end he said “I have come to think of my role as one which operates outside the realm of partisan politics.” Mark Engler and Paul Engler write in Rolling Stone that he instead launched the “Poor People’s Campaign,” which proposed a major wave of disruptive protest in Washington, D.C., designed to compel action around economic inequality. “We believe that if this campaign succeeds, nonviolence will once again be the dominant instrument for social change — and jobs and income will be put in the hands of the tormented poor.” King was killed before the campaign could come to fruition but it went on without him.

Politics is about transactional change, movements of nonviolent resistance are about transformational change. All power is not in the hands of the president, Congress, generals or CEO’s, the people have great power when they are organized, mobilized and focused. King’s decision not to run for president shows us our opportunity as part of a people-powered movement to transform a nation in crisis today.

The article below, written during the 2016 election, describes where the two party system has led the nation and then goes into Dr. King’s views on electoral politics. KZ

Do We Vote for the “Lesser of Two Evils” or to “Recapture the Revolutionary Spirit.”

“The future of the deep structural changes we seek will not be found in the decaying political machines.” – Martin Luther King*

The scale of our problems are far too great. There is far too much at stake. The problems we face are dangerous, deeply embedded, institutionalized. There is no clever, cunning or purely tactical way of addressing them.  Inside baseball and palace politics have failed.

Let’s consider the core issues of power and social control in the US today:

The Corporate Power is vast wealth wedded to political control.  And, it rules America.   This power grab was not the result of free markets; it has been engineered.  A century of political interventions and a dense web of public subsidies and tax benefits have redistributed wealth to the 1%.  The richest country in world history, the US has among the worst income inequality in the developed world.

And the Corporate Power is reckless. Climate change is proceeding at a pace that surprises even climate scientists.  Yet, fossil fuels giants remain our primary source of energy. The fossil industry claims billions of public dollars in a complex array of entitlements and privileges.  We fight wars for oil.

Seemingly endless wars expand on multiple fronts in Asia and Africa. The current cycle of regime change, preemptive war and increased terrorism dates at least to 1978 when we first overthrew the government in Afghanistan by organizing and arming the Mujahideen.  We are 15 years in Afghanistan, 13 years in Iraq; a county we have been bombing since 1991. Libya. Syria. Yemen. Pakistan.

The US now has the the largest system of military bases in world history. There are 650 major bases and nearly 900 total bases in 150 countries. The military-industrial complex, which President Eisenhower warned us about long ago, grows ever larger. The US has been the world biggest producer and exporter of weapons for over half a century. And, war is environmental catastrophe. The US military is the single largest consumer of fossil fuels as it is sent to protect and secure oil supplies. War and empire lays claim to the greatest share of discretionary spending in the federal budget for over half a century at least.

Our vast militarized penal system is the worlds largest. No other county imprisons as many of its own citizens.  Non-violent offenders fill prisons mostly from the war on drugs.   The so-called war on drugs has functioned like a preemptive strike on the potentially most rebellious ranks of the American people: people of color, the poor, the working-class and the young. And, extra-judicial killings by police, aimed largely at black and native people are rampant, at roughly 100 times that of other countries.

Since 9/11 domestic surveillance has grown exponentially. Millions of Americans, accused of no crime, routinely have their emails, phone calls, internet use, and mail spied upon. The penal and surveillance system have shredded basic civil liberties enshired in the Bill of Rights. What cannot be efficiently caged, shot or spied on is instructed in the ways of fear and fatalism by the corporate media.

Six giant corporations control 90% of the mass media.  Decades of corporate influence including the Telecommunications Act of 1996 signed into law by President Bill Clinton and FCC rule changes by Republicans have created a sophisticated propaganda machine in the service of the existing order.

And finally “the great two-party system” itself. With a stranglehold on the Constitution  and government, both parties have built formidable legal obstacles prohibiting opposition parties and limiting reform efforts from within. The big corporations and the billionaires successfully govern through money and the revolving door of lobbyists, legislators and officials.  The evidence is so compelling we hardly needed the Princeton study of 1,800 policy initiatives or former President Jimmy Carter to tell us we are no longer a democracy but an oligarchy.

And yet, the machines have overplayed their hand. The strategy of triangulation depends on lesser of two evils voters that consciously choose candidates and parties they know no longer represent them.  How else could the Democrats so closely mimic the Republicans — abandon their traditional New Deal voter base — and still maintain power?

But, the capacity of the establishment to scare people into forgoing the basic concepts of representational democracy — that people vote for candidates and parties they believe to represent their views and interest — finally appears to be reaching its limits. Evidence? 40% of registered voters are now Independent.  Another 40% of eligible voters do not vote. The Sanders surge is unprecedented by almost any historical measure.  And growing numbers of the Sanders supporters are refusing to vote Clinton if the machine prevails.

War and Empire, mass incarceration, mass surveillance, corporate media, the decaying two party system; these are not simply policy choices, nor conspiracies, but deeply rooted and interlocking historical trends that constitute corporate dominance. These institutionalized structures are well financed, protected by law and power. For three decades and more, the Corporate Power and its means of social control has been the bipartisan project of the so-called “center.”

If this be the center, if this be moderation, what then is extremism?

And, the Clintons have been among the most influential architects of the system. By what measure or by what scenario can the “lesser of two evils” challenge the extremism of the center?

Instead, this begs revolution. And yes it will take movement building outside of the electoral arena. But in 2016, we will have a real choice: Bernie Sanders for President or we will vote for the Green Party.

“In addition to the development of genuinely independent and representative political leaders, we shall have to master the art of political alliances. Negroes should be natural allies of many white reform and independent political groups, yet they are commonly organized by old-line machine politicians. We will have to learn to refuse crumbs from the big-city machines and steadfastly demand a fair share of the loaf.

When the machine politicians demur, we must be prepared to act in unity and throw our support to such independent parties or reform wings of the major parties as are prepared to take our demands seriously and fight for them vigorously. This is political freedom; this is political maturity expressing our aroused and determined new spirit to be treated as equals in all aspects of life.”[1]

We can declare our independence, reclaim our political freedom. We can make our ancestors proud.

“It is a sad fact that, because of comfort, complacency, a morbid fear of communism, and our proneness to adjust to injustice, the Western nations that initiated so much of the revolutionary spirit of the modern world have now become the arch anti-revolutionaries…..Our only hope today lies in our ability to recapture the revolutionary spirit and go out into a sometimes hostile world declaring eternal opposition to poverty, racism and militarism.”[2]

King’s vision endures. It rings true to our time. We can vote to recapture the revolutionary spirit.  It begins with Sanders or Green in 2016.

It ends with us.

1.*Martin Luther King, Where Do We Go From Here?

3. King, A Time to Break the Silence.