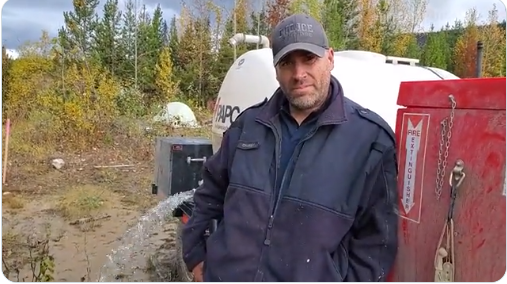 What We Know About The RCMP’s Resource Extraction Protection Unit

The RCMP’s definition of its so-called Community-Industry Response Group sits in stark contrast to the experiences Indigenous land and environmental rights defenders with the unit.

The RCMP’s “Community-Industry Response Group” (C-IRG) could also be described as a resource extraction protection unit. It’s militarized responses to land defenders at Fairy Creek, Wet’suwet’en, or, most recently, Gidimt’en Checkpoint, have demonstrated which side of “community” versus “industry” the group is on. Here’s what we know:

According to the RCMP:

The RCMP adds: “The C-IRG uses a measured approach in facilitating the peaceful resolution of public disorder issues. They proactively engage all stakeholders through open communication and meaningful dialogue.”

This would not describe the experiences of Indigenous land and environmental rights defenders on their territories in Canada.

The C-IRG On Wet’suwet’en Territory

“RCMP officers volunteer and request to be on this [C-IRG] team – so we get the gung-ho guys, who have specially requested to come out there and harass us.”

The Guardian reported on the militarized RCMP raid on Wet’suwet’en territory that took place on January 7, 2019.

Significantly, it notes that RCMP commanders instructed officers to “use as much violence toward the gate as you want” to remove a roadblock intended to stop construction of a fracked gas pipeline on their territory.

The Guardian also reported: “Since the January raid, an RCMP detachment known as the Community Industry Safety Office has maintained a large presence in an effort to forestall any resistance to pipeline construction.”

Helping to make the connection, Wickham has explained: “[The C-IRG] work out of the Community Industry Safety Office (CISO).”

The RCMP presence on Wet’suwet’en territory between January 2019 and March 2020 – which included two raids against land defenders – cost more than $13 million, according to documents obtained by CBC News under the Access to Information Act.

Last week, Michael Toledano tweeted: “Members of CIRG – the specialized RCMP unit that protects resource extraction in BC – were spotted on Wet’suwet’en territory. CIRG was active on Wet’suwet’en land since police first forced their way in early 2019 but had recently been diverted to Fairy Creek. They’re back.”

The C-IRG On Ditidaht And Pacheedaht Territory

And in a ruling issued on September 28, B.C. Supreme Court Justice Douglas Thompson stated the RCMP enforcement methods against land defenders at Fairy Creek “have led to serious and substantial infringement of civil liberties,” that there were “disquieting lapses in reasonable crowd control” and that RCMP officers wearing controversial “thin blue line” badges puts the court into disrepute.

The C-IRG On Secwepemc Territory

The RCMP has maintained this presence on Wet’suwet’en and Secwepemc territories despite this resolution from the United Nations Committee on the Elimination of Racial Discrimination (CERD) calling for the RCMP to be withdrawn from these traditional lands.

The Latest On Gidimt’en Territory

“RCMP Dump Drinking Water at #CoyoteCamp. Officer Charney clearly enjoys his job. Here we see him emptying water cisterns yesterday and threatening to arrest anyone that tries to stop him.”

“The CIRG also rifled through tents, took ATV and truck keys and locked them inside the vehicle. They harassed media and legal observers while standing less than 6 feet away from them without masks. All under Charney’s command.”

This Canadian Press article also places Staff Sergeant Jason Charney at Fairy Creek in May of this year.

The RCMP fall under the responsibility of federal Public Safety Minister Bill Blair. When the C-IRG was created in 2017, Ralph Goodale was the minister.

When the RCMP are contracted to do policing in British Columbia they also fall under the responsibility of provincial Solicitor General Mike Farnworth.

On January 27, 2020, Farnworth Wrote Jennifer Strachan (the commanding officer of the RCMP in BC) that he authorized the “internal redeployment of resources within the Provincial Police Services” on Wet’suwet’en lands in order to “maintain law and order, and to ensure the safety of persons, property and communities in the area.”

Days later the second RCMP raid against the Wet’suwet’en began.

It does not appear that these ministers have been questioned in depth about the formation, funding and behaviour of the C-IRG unit. This leads to a generalized environment of impunity for these police actions against land defenders.

“If Indigenous peoples are to be safe in their own territories, we need immediate, radical and sweeping changes in the laws, policies and governance of law enforcement in Canada; not the weak recommendations that dance around the edges of the status quo.”

She highlights: “The only way we are ever going to stop RCMP racism and brutality against Indigenous peoples is to declassify, deconstruct and defund the institution itself.”

Gidimt’en land defender Sleydo’ has stated: “We want to live free on our lands, without the constant threat of violence by CIRG, who are illegally occupying Gidimt’en territory.”