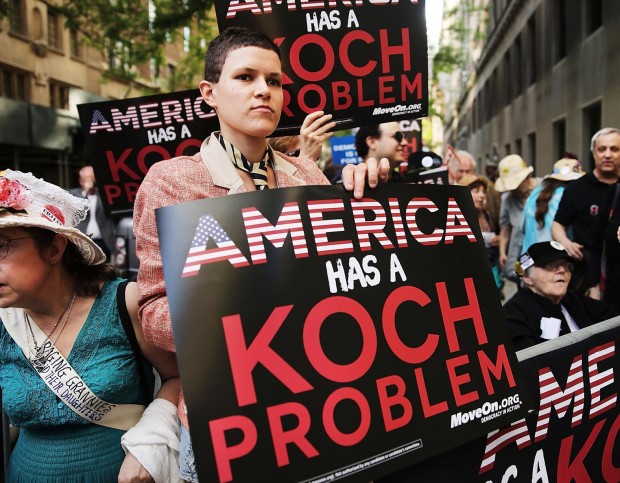 What Does Charles Koch Get By Donating To George Mason U.?

Above: Activists hold a protest near the Manhattan apartment of billionaire and Republican financier David Koch on June 5, 2014 in New York City. The demonstrators were protesting against the campaign contributions by the billionaire Koch brothers who are owners of Koch Industries Inc. Spencer Platt/Getty Images/AFP.

As college students of the 21st century, we are well accustomed to budget shortfalls and financial uncertainty. Undoubtedly, the fiscal pressures of running a reputable institution such as George Mason University must be ten-fold compared to those we face as young adults.

Seeking financial contributions to help support the research, departments, and programs of a university is certainly a hefty and necessary responsibility of any administration hoping to grow and expand its institution, especially at a place such as George Mason University where “innovation is tradition.” Receiving this financial support, however, should not come at the expense of an institution’s academic freedom.

The Charles Koch Foundation (CKF) is the largest donor to George Mason University, having contributed over $23 million since 2005 and millions more in years prior. The Institute for Humane Studies (IHS) and the Mercatus Center, both hosted on GMU’s Arlington campus, are also heavily Koch-funded and still governed by current Koch Industries executives. Charles Koch has served as the chairman of IHS for decades, and Mr. Koch is a founding director of the Mercatus Center. From 2007-2012, donations from CKF managed to make up 15% of the George Mason University Foundation’s total incoming grant revenue, according to IRS tax filings, causing the university to be criticized as being a subsidiary of Koch Industries.

Indeed, outside financial contributions are imperative in keeping a university afloat. The problem occurs when the campus community remains unaware of whether or not the donations of a private entity, such as CKF, come with strings attached that may jeopardize the academic freedom of its professors and students.

Charles Koch has a history of using donations from the Charles Koch Foundation to manipulate educational processes, limiting perspectives that are taught in departments Mr. Koch funds. Florida State University, the second largest recipient of CKF funds, was expected to give CKF veto power over the hiring processes of certain faculty and provide the foundation with undue influence over curriculum and teaching. Recent reporting confirms that despite re-negotiating with the Koch Foundation, FSU still promotes a narrow range of disciplines favored by Charles Koch in the programs he funds. Considering the Kochs have known and significant ties to professors, departments, and the administration at George Mason, it is reasonable to question whether or not corporate interests are similarly undermining the educational processes of our university as well.

To examine these concerns more thoroughly, we submitted a Freedom of Information Act (FOIA) request last semester in hopes of gaining access to documents that would demonstrate whether or not the $23 million George Mason has received from CKF came with any restrictions. Days later, we were told that all financial donations are funneled through the GMU Foundation, which does not have to respond to our FOIA request as a distinct private entity. Expecting the university to be willing to work with tuition-paying students, we approached the GMU Foundation directly with a similar request for documentation, but were again denied.

With a precedent already set by CKF’s involvement with colleges including Florida State University, and the lack of transparency at George Mason, the campus community has the responsibility to question George Mason University’s commitment to academic freedom. Students, faculty, alumni, and even prospective students and faculty, are being denied their right to know who may be influencing the education being provided by our public university.

Considering these legitimate concerns and our previous experience of being stonewalled when asking questions about financial contracts, we ask that George Mason University begin taking steps to increase transparency. This is necessary in order to demonstrate that an education from GMU is not being unduly influenced by private interests and GMU’s academic credibility is not being used by think-tanks, such as IHS and the Mercatus Center, to advance the business interests of certain donors. To begin working toward this goal of transparency on campus, we would formally like to request a meeting with you, President Cabrera, by October 24, 2014 to further discuss this matter and outline corrective measures that need to be taken to maintain George Mason University’s reputation as a credible institution of higher learning.