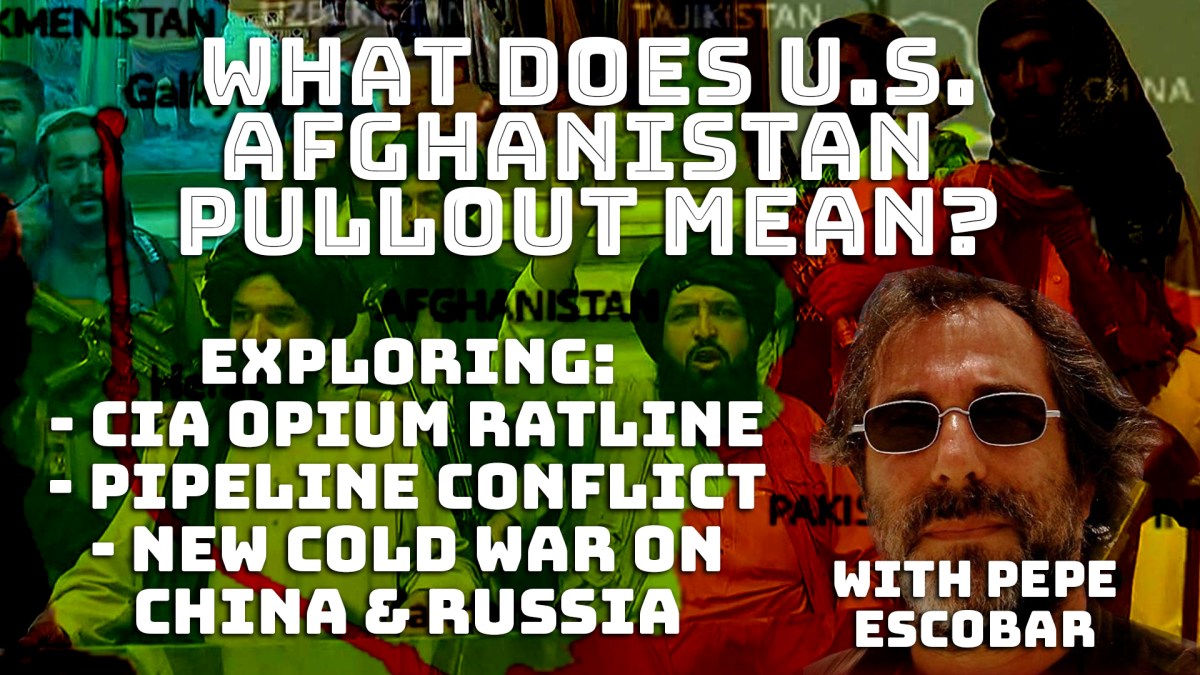 What Does The US Afghanistan Pullout Mean?

Max Blumenthal And Ben Norton Of The Moderate Rebels Podcast Discuss The US Military Pullout From Afghanistan With Journalist Pepe Escobar, Who Has Extensive Experience Reporting In The Country And Was Arrested By The Taliban Twice.

In the first part of the interview, we talk about the geopolitics of the conflict, how the Taliban has changed, what the future Afghan government could look like, and the corruption of US puppet President Ashraf Ghani and other CIA assets.

In the second part, we discuss the 20-year US/NATO war in Afghanistan, the opium ratline the CIA used to fund dirty covert ops, the fight over pipelines, and the estimated $1 trillion worth of untapped mineral reserves in the country, as well as Washington’s “pivot to Asia” and how Afghanistan is central in the new cold war on China and Russia.

Pepe Escobar says he and other geopolitical analysts he has spoken with think the US defeat in Afghanistan “is even more important than 9/11.”

“So you can imagine [Zbigniew] Brzezinski rolling in his grave 24/7, because he was always desperate about the emergence of a peer competitor in Eurasia, especially in the Eurasian heartland. This is a geopolitics 101, in fact.”

“And that is what moved Brzezinski at the time, even before the Soviets entered Afghanistan, to invent a jihad. Which is something that we are living the after-effects of this intervention, 40 years later. And now the whole thing is turned upside down.”

Escobar said the newly independent government in Kabul will now likely join the Shanghai Cooperation Organization, alongside Beijing and Moscow.

“So what does this tell us tell us?” he continued. “Once again, the big story of the 21st century, which irrespective of what the US was doing, which was basically the ‘war on terror’ for most of these past 20 years, the big story is the integration of Eurasia, with Russia and China as let’s say the primus inter pares – everybody is more or less equal, but of course Russia and China are more equal than the others. And everybody is under the same roof.”

This “is something that we’re going to see in the next few months,” with China and Russia “discussing among other extremely important geopolitical issues how are we going to integrate Afghanistan into an all-Asian project of economic and political integration, how are we going to support their efforts to have a country that is relatively stable.”

“Behind the scenes,” Escobar added, Beijing and Moscow “are more or less, I described it as stage-managing, but it’s more like it stage-managing in the sense of pointing the Afghan Taliban where to position themselves in the global stage. So the other half, which is what we could call NATO-stan – the United States and Europeans in NATO, more or less – have to respect this new paradigm, and at least try to live with it.”