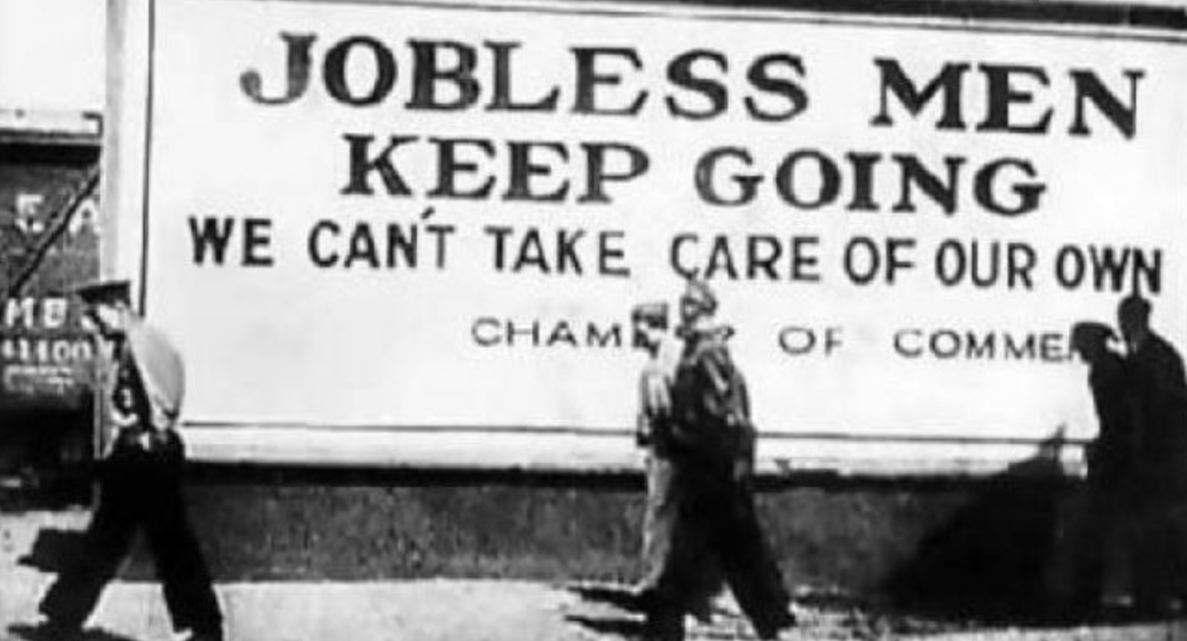 What Ever Happened To Class Struggle?

Above photo: A sign that reads ‘Jobless men keep going we can’t take care of our own’ commissioned by the Chamber of Commerce to discourage hobos, circa 1935. travelstudies.

As the fight amongst the oligarchs heats up over Trump’s 2nd impeachment, one must wonder what ever happened to the days when the poor and the working class were clear-eyed enough to see their real struggle was against the rich?  Wall Street banksters, the weapons warlords, Hollywood moguls, oil barons, real estate developers and the like.

Instead we see the Lumpenproletariat on their knees scratching and clawing each other – defending one side of the elite mobsters who are armed against the other in Washington’s usual sideshow that distracts the nation from the ever present reality of capital accumulation.  The gap between the 1% and the 99% widens to resemble the divide at the Grand Canyon while loyal Republican & Democrat party faithful bark out the scripts written by the commanders of the Congressional leadership.

If you listen closely you can hear the muffled graveyard anguish of Robin Hood, Joe Hill, Mother Jones, Ida B. Wells, Woody Guthrie, Jane Addams, Martin Luther King Jr, Malcom X, Cesar Chavez and many more.  Why are we not aiming our anger and well-justified outrage at those who really run the show? Why do we carry water for one side of the corrupt uber class against the other?

Trump’s impeachment in the Senate is all about theatrics and distraction.  Even before the gavel pounds to open the hearings the outcome is known.  The costly show will go down to ultimate failure because 17 Republicans are needed to ensure a ‘successful’ prosecution and the Democrats will not sway enough of the other side to join the effort.

Meanwhile the legions of those being evicted from their homes will grow, unaddressed by the well dressed (and well fed) politicians who stand on the Senate floor and bloviate about ‘right and wrong’. The hungry will not be fed by these hearings.  The jobless will not be helped.  Those without Medicare for All will not be served by those who work for the rich.

National Public Radio (NPR), the NY Times, Washington Post, Fox News, MSNBC and CNN will spend hours cranking up the public with reports on the ‘historic debate’ in the halls of the people.  But those halls have boundaries and those who labor inside the Congress have masters to serve and they know their jobs.  They don’t do anything to disrupt the status quo.

Beware what bait you bite on in the coming days. You just might get hooked into a circus act that is designed to hide the real horror of today – the reintroduction of feudalism.