What Is The AFL-CIO’s Solidarity Center Doing In Venezuela

By James Patrick Jordan, AFGJ
February 10, 2019
| Educate!
What Is The AFL-CIO’s Solidarity Center Doing In Venezuela2019-02-102019-02-10https://popularresistance-uploads.s3.amazonaws.com/uploads/2017/12/popres-shorter.pngPopularResistance.Orghttps://popularresistance-uploads.s3.amazonaws.com/uploads/2019/02/venezuela-coalition-of-venezuelan-workers-ctv-general-secretary-jos-elias-torres-speaking-alongside-juan-guaid.-from-afgj-1-e1549829992431.jpg200px200px

Note: The National Endowment for Democracy (NED) is a regime change organization funded by the United States. It is a private, non-profit, grant-making organization that receives an annual appropriation from the U.S. Congress through the Department of State.

The Solidarity Center grows out of the AFL-CIO’s long-term international work. The AFL-CIO had worked internationally for many decades with funding from the Office of Strategic Services and the Central Intelligence Agency. It had worked to stop Communist movements in Western Europe after World War II. See  Lodge, George C. (1962). Spearheads of Democracy: Labor in the Developing Countries Harper & Row for the Council on Foreign Relations: New York..With the 1997 launch of the Solidarity Center, those ties ended and were replaced by NED funding. See American Prospect, “The CIO without the CIA,” December 19, 2001.  KZ 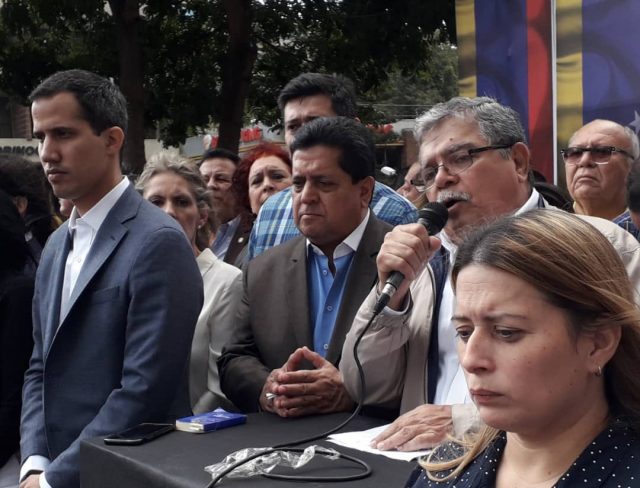 The Solidarity Center–the AFL-CIO’s organization for acting around the world–has long been active in Venezuela, and not usually for good effect.  We demand that the Solidarity Center open their books, and honestly report about their current operations in that country.

We hope they are not supporting the current coup attempt against President Nicolás Maduro in any way, as the coup attempt is an illegal effort to replace a democratically-elected president with one not elected by the Venezuelan people but of the US Government.  But we don’t know; their past operations cause us great concerns; and we want them to prove to us they have nothing to do with the current attempt.

The Solidarity Center’s operations are part of the AFL-CIO (and previously, AFL) foreign operations that have taken place over the past 100+ years.  This was most completely documented in a 2010 book titled AFL-CIO’s Secret War against Developing Country Workers:  Solidarity or Sabotage? by long-time labor activist and Purdue University sociologist, Kim Scipes (Lanham, MD:  Lexington Books).  The Solidarity Center has continued operating since then.

The Solidarity Center has probably received more funding than we know about. But since they do not open their books to AFL-CIO members, information is not available about specific projects and details about who they are funding. Nonetheless, some information is worth remembering.  In 2012, I wrote an article revealing that the Solidarity Center had gotten a two-year $3 million grant for its Venezuela/Colombia office. While researching that piece, I also discovered information about a $400,000 grant in 2010 for the same purposes. I recently visited the NED and Solidarity Center websites to find out about funding and operations since that time. The only information now available is for the year 2017, which gives a vague description of a $525,000 grant,

“To build and broaden support for the defense of fundamental labor rights in Venezuela beyond the trade union movement, and prepare new union leaders to advocate for workers’ interests through democratic processes. In Colombia, the center will bolster union participation in transitional bodies established to implement aspects of the peace accord, as well as support union-led advocacy for improved access to justice.”

If you go to the NED website and look at its page for Latin America grants, you will only find the most general  descriptions of its 2017 funding. It does provide a link you can click to “View Grants from Previous Years”. Unfortunately, that link only takes you back to the opening page about the regions they work in, not to information for any other years. It’s a loop of non-functionality.

If one goes to the Solidarity Center website for more information about operations in Venezuela, one will find the same vague overview that has been there since it was first posted in 2014:

The Solidarity Center supports efforts to unite unions from diverse political orientations to promote fundamental labor rights in the face of anti-labor actions that threaten both pro-government unions and traditionally independent unions. This emphasis on core union rights such as freedom of association and collective bargaining helps unions transcend their political fissures to address the basic needs of working people in Venezuela.”

But perhaps today things are different. If so – why doesn’t the Solidarity Center open its books so we can see for ourselves? The Solidarity Center has been spending hundreds of thousands of dollars, perhaps millions, in Venezuela, and no one but they have any real idea what they’re doing.

On February 4 2018, an intern working with the Alliance for Global Justice called the Solidarity Center for a research project. He wanted information on specific kinds of work the Solidarity Center is doing in Venezuela, and who some of their main partners are. The operator told him, “We have a workers union, and we will work with partners when needed.” She added, “Our website is constantly updated, so just look there to see what is going on.” When he asked for the office number of the Solidarity Center in Bogotá, he was told, “Sorry, we don’t just give out phone numbers like that.”

Again, I have periodically looked at the Solidarity Center website since I wrote the 2012 article mentioned earlier. There have been no constant updates. The information regarding Venezuela is old, stagnant, and minimal. And why is the Solidarity Center’s office number in Bogotá such a secret? Do they have something to hide? Shouldn’t a Solidarity Center office be publicly reachable?

We are seeing developments in Venezuela that give us every reason for concern. Workers, proponents of democracy, those who oppose foreign interference in other countries’ elections, the tax payers whose monies fund the Solidarity Center – we have a right to know what they are doing in Venezuela. We especially have that right, knowing what we know from 2002, and seeing suspicious similarities as the U.S. government is calling for a coup and trying to install its own hand-picked “president” today.

Over the past year, there has been a series of strikes in Venezuela. Some of these strikes have been legitimate activities of unionists trying to win improved compensation and other demands. There are no workers’ paradises in this world, and while Venezuela is moving toward socialism based on popular power, it is not there, yet. Capitalism and corporate power have not been erased in Venezuela. So, certainly there is a continuing need for unions, and they will continue to wage struggles. No one disputes that.

But many of these strikes have been called by unions and union leaders who have a collaborationist history with right wing parties. In fact, some of them are leaders in these parties. We are in a time of economic sanctions, hording by opposition business leaders, with new measures enacted to block oil profits returning to Venezuela. Labor unrest can be an important component for this destabilization.

José Elias Torres, the General Secretary of the CTV, has taken every opportunity to denounce the current government and has appeared publicly alongside the self-proclaimed “President of Venezuela,” Juan Guaidó (as opposed to the President, Nicolás Maduro, who was democratically-elected in a national election last year). Torres and the CTV helped mobilize participation in the January 23, 2019 demonstrations where Guaidó made the proclamation that he was the president, not Maduro, following a phone call the night before from U.S. Vice President Mike Pence giving him the green light.

Ivan Freites is a leader of both the Federation of Oil Workers (part of the CTV), and also the political party Voluntad Popular (Popular Will), founded by opposition leader Leopoldo Lopez. Lopez is known for calling for violence against the Bolivarian government and its supporters. Five days after Guaidó’s proclamation, Freites was calling for a takeover of PDVSA, the state oil company. It is as if he has taken a play straight from the 2002 collaboration between the union leaders and FEDECAMARAS (Federation of Chambers of Commerce and Production), the leading business organization in the country.

But it would be a mistake to cynically take the little bit of information we have, connect that to the past, and shrug our collective shoulders and say with bitter resignation that, “The Solidarity Center is up to its old tricks again.” This is not the same Solidarity Center that we had in 2002. In 2002, the Director of the Solidarity Center was Harry Kelber, a holdover from pre-Solidarity Center days when AFL-CIO foreign relations were arguably a front for the CIA. Since Kelber left, new leadership has come of age throughout the AFL-CIO, including the Solidarity Center.  Some indication of new thinking was evident during the 2009 coup against the elected government of Manuel Zelaya in Honduras. During that unfortunate time, every statement or report I saw from or about the Solidarity Center indicated that it was against the coup.

Another change I have seen in the AFL-CIO, as distinct from the Solidarity Center, has to do with Colombia. Back in 2008 and 2009, when the Solidarity Center was meeting to strategize for passage of a US-Colombia FTA, it was also intervening to stop solidarity relationships with the FENSUAGRO federation of agricultural workers unions, who were dismissed as being too “communist”. FENSUAGRO is one of the most persecuted labor organizations in the world, having suffered constant threats, assaults, and displacement because of targeting by paramilitary death squads and Colombian Armed Forces serving the interests of extractive industries and big landowners. Today, the United Steelworkers, California Federation of Labor, New York State Auto Workers Unions, and several other labor federations at various levels have made statements and taken actions of solidarity with FENSUAGRO. FENSUAGRO General Secretary Nidia Quintero has twice toured the U.S., speaking at labor halls across the country.

When one looks at the current Board of Trustees for the Solidarity Center compared to that of past times, one has reason to believe that there has been some positive movement. The new board includes Leo Gerrard, of the United Steelworkers, a union that has pioneered international worker to worker solidarity, independent of U.S. government funding or direction. The USW opened the path of acceptance in the U.S. for FENSUAGRO.

Art Pulaski is another Board Member. Pulaski has been the Executive Secretary Treasurer of the California Federation of Labor since 1996. Under Pulaski’s leadership, the Cal Fed unanimously passed the historic “Unity and Trust Among Workers Worldwide” resolution, which was brought before the 2005 AFL-CIO convention. That resolution had two demands: that the Solidarity Center open its books on activities past, present, and future; and that it wean itself off its dependency on U.S. government funding.

Those of us involved in the struggle to change how U.S. Labor conducts its international relations have seen some progress over the years, and that progress has even touched the Solidarity Center. That’s why this is not a time for cynicism, but for mobilization.

But some things have pointedly not changed. The old system at the Solidarity Center is still in place. That system is not accountable to, nor does it proceed from labor. The Solidarity Center is still a U.S. government funded and, therefore, dependent institution. And that means it can still function as a conduit for U.S. interference in the electoral affairs of other countries, including regime change.

Whatever improvements may or may not be happening at the Solidarity Center, they are happening within a context of interference in Latin America via U.S. Labor relations that dates at least back to 1973 and the overthrow of Salvador Allende by Augusto Pinochet, in which the AFL-CIO played a shameful part. Given that, the Solidarity Center is in no defensible position to obscure what it’s doing in Venezuela today.

We have a right to know.