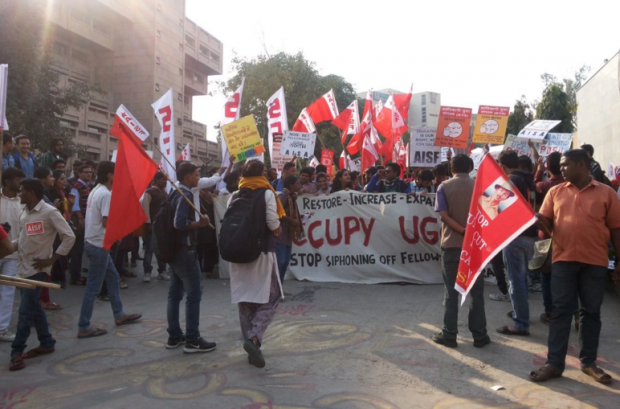 What Lies Behind the ‘Occupy UGC’ Protest

Above Photo: Protesters holding banners and flags at ITO on November 18

New Delhi: It was about a month ago that Ramesh Srivastava, a clerk at a bank in New Delhi’s ITO area, first noticed “young people” sitting on a pavement leading to the University Grants Commission office with a banner saying “Occupy UGC.”

In the following days, Srivastava stopped by to read the rest of the banners and graffiti put up around the pavement and the nearby Metro station and chatted with “some boys and girls there to understand why they are protesting” the decision to terminate financial support for thousands of post-graduate students across the country.

Srivastava now “supports” them. He has his reason. “I have a college-going son, he wants to do a PhD. If these students succeed in their protest, it might help my son pursue his studies without much financial help from me.” Why is the government against the fellowship they get, he wonders.

On the afternoon of November 18, Srivastava is at the protest site, watching from a distance along with two colleagues as hundreds of students from different universities of Delhi and outside come to join a march to the Ministry of Human Resources and Development (MHRD) in Shastri Bhavan. They are protesting the October 7 decision of its statutory body – the UGC – to scrap all fellowships granted to MPhil and PhD students who have not taken the ‘National Eligibility Test’, or NET – an exam designed to determine eligibility for the job of lecturer and for a limited number of junior research fellowships (JRF). “Our children have a stake in it,” he tells this correspondent.

Though Srivastava – like most other onlookers – doesn’t know the exact reason behind the UGC’s decision, he is spot on in his contention that it will not only affect the research undertaken by the 35,000 students who are currently availing fellowships, but will also have an adverse effect on the prospects of future generations of research scholars in this country. Like his son.

Non-NET fellowships were introduced by the MHRD through the UGC in 2006 to boost research in central universities. Students who don’t qualify for the UGC’s NET-JRF were made eligible for financial assistance, if they were selected  to a research programme by an eligible university. The programme is currently available to MPhil and PhD students of 50 institutions – all central universities and those which have a potential for excellence. While an MPhil student gets Rs. 5000 per month, a PhD student gets Rs. 8000 p.m. Scrapping the fellowship means thousands of students pursuing higher education and research on a variety of subjects will cease to get institutional support. Many would be forced to abandon their studies.

Though the UGC has not revealed its thinking on the subject, the unofficial reason behind the decision to pull the plug on non-NET fellowships is that there is no transparency in the programme. One official told a national newspaper, the “UGC spent Rs. 99.16 crore on the programme in 2014-2015 but there is no way to ensure that it went to quality, meritorious students.”

Jawaharlal Nehru University student Virender Singh, a non-NET fellowship holder, strikes back when this argument is posed at him. “Just because the UGC doesn’t have a transparent mechanism in place to check the expense flow, will it deny a much needed opportunity to students? Is it the students’ responsibility to set up a transparent system? A student gets into a PhD programme after  college and one year of MPhil. After these long years, he decides to spend another 5 to 7 years in higher studies which many parents of poor and middle-class background can’t or won’t support. They want their children to take up jobs. That is when Rs. 8000 from UGC helps,” he says. If the programme is scrapped, his concern is, “it will affect only poor students like me.”

Holding a banner at ITO is Sushil Kumar, a PhD student in the Hindi department of Delhi University. He agrees the system has no transparency. Else, “only five of the 25 students in my batch would not have got the fellowship.”

He states, “DU has been diverting the money elsewhere. Students protested it in 2012. In 2014, the university gave fellowships to everyone. This year, it has come back to five again. The UGC should ask why.”

With his further studies at stake, Virender joined the flash protest organised by the JNU Students Union in front of the UGC office on October 21, a day after the commission uploaded the decision on its website.

“The police took 97 of us to the faraway Bhilaswa police station so that we don’t return to the UGC. We were detained till the evening. But on October 26, we returned anyway. The police then cordoned the lane, so we sat on the pavement. It’s been a month since we have occupied this space,” says JNUSU president Kanhaiya.

At the protest venue, one can hear disapproval of Banaras Hindu University Vice Chancellor Girish Chandra Tripathi‘s comment that students buy motorcycles with their fellowship money. Says Kanhaiya, “He should know better; students undergo a rigorous process to qualify for an MPhil and a PhD programme. Who would do it to buy a motorbike?”

Among those siting on the pavement is Anup Kumar. He has been availing the fellowship even though he is enrolled in Ambedkar University, a state varsity under the Delhi Government.

“According to our vice chancellor, we are getting it from a pool which the university has put together to help its research students. My question is why are we so privileged? Why are those in other state universities not?”

Widening the scope of the fellowship programme to all state universities is one of the demands of the Occupy UGC movement. Anubhuti, a research scholar at the history department of JNU – and one of those who have been sleeping on the pavement since the protest began a month ago, counts three demands, “The first is, the non-NET fellowships should not be scrapped. Second, the fellowship money should be enhanced as Rs. 8000 is highly inadequate for a student to sustain herself for a month. The third demand is, the programme should be extended to the state universities.”

After meeting a delegation of the Akhil Bharatiya Vidyarthi Parishad on October 26, HRD Minister Smriti Irani tweeted that the fellowships won’t be scrapped and the programme may be extended to state universities. Meeting the protesting students at Shastri Bhavan on November 5, Irani reiterated her position. She issued formal orders to the UGC to scrap the decision and notified the constitution of a five-member expert committee to examine the feasibility of expanding the scope of the programme. Says Anubhuti, “The protest is continuing because of the fine print of her order. On November 18, we went to Shastri Bhavan to protest that order. It says the committee has also been asked to consider economic and other criteria for the fellowships. What are those criteria? We don’t want it to be tampered with.”

Students allege that the UGC’s decision reflects a hidden agenda of the government. That the NDA is following up the UPA’s offer for market access in higher education to WTO at the Doha Round trade negotiations in 2005. The offer meant the Indian government was ready to allow “educational traders” from WTO’s 160 member nations to establish colleges, universities and other technical or professional institutions as commercial ventures in the country.

Nandita Narain, president, Delhi University Teachers’ Association, concurs: “The UGC’s decision is linked to the government’s decision to open higher education to market forces, which is why it doesn’t want to invest any money in its institutions. While the worldwide norm has been that governments spend 6% of their annual budget on education, our’s has chopped it to Rs. 13,000 crores from Rs. 16,900 plan allocation. The UGC will have to scrap some grants to the universities.”

The aim is to encourage foreign-funded private universities and colleges, she argues. “Once you express your readiness to open the market to the WTO, private think tanks start dictating you to bring in certain changes before the international players come in so that they can have good business. This is exactly what the government is doing. The WTO ministerial conference is slated for December 15-18 in Nairobi. The government has to show some progress there.” Narain says, “Since the government has not routed most of the changes though bills in Parliament, they are not in public discourse even though they will affect people. There will come a time when only the rich will get teacher taught education in India and the rest will have to opt for cheaper, low quality, online courses. It means most of our young people will be denied quality education. This is intellectual colonisation.”

DUTA has expressed support to the students’ movement along with some other university teachers associations. Anubhuti says over a dozen student bodies including the All India Students Federation are actively participating in it. “We even have students from FTII, Pune, here. Students of the Delhi College of Art came over to make posters for us, drew graffiti.” She highlights, “Though the Occupy Movement of the West is new to the student movement in India, it’s been a month since we occupied this space. The government might not show it but it is worried.”

Come December 9, there will be a bigger show of strength, she says. “Students from different states will join us at a national march in Delhi. It is as much against the UGC’s decision as to send out a message to the government that it should not tamper with higher education and make it a commercial enterprise.”

Meanwhile, Srivastava and his friends hope it is in the afternoon hours so that they can join in during lunch break