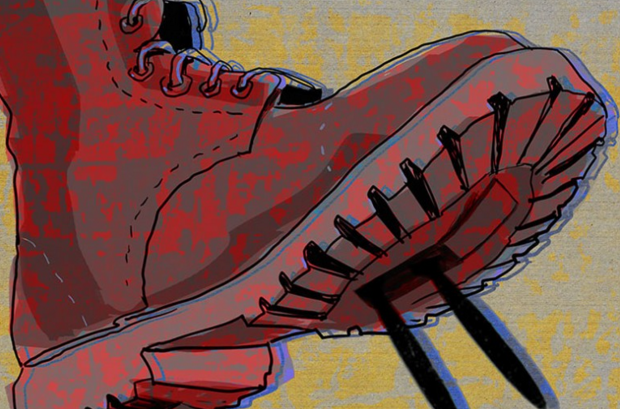 What Preceded The Islamic State Attacks In France

Above Photo: From CrativeResistance.org. No Boots On The Ground by Anthony Freda.

Gunmen and bombers attacked restaurants, a concert hall and a sports stadium at locations across Paris on Friday, killing at least 120 people in a deadly rampage that a shaken President Francois Hollande called an unprecedented terrorist attack.

The Islamic State claims responsibility (English version) for the attack.

But who weaponized and financed the Islamic State or prior organizations in Syria and Iraq from which this terror attack grew? Is this cartoon justified? 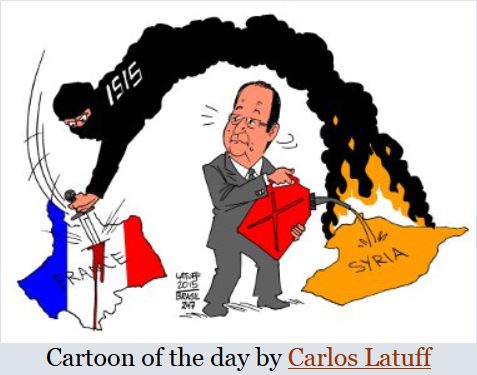 The French president has admitted delivering weapons to the Syrian rebels during a period of EU embargo, a new book about to be published in France reveals.The deliveries took place in 2012, before the embargo was canceled in May 2013, according to François Hollande’s last year interview with journalist and writer Xavier Panon. “We began when we were certain they would end up in the right hands. For the lethal weapons it was our services who delivered them,” Hollande told the writer, …

WASHINGTON — Most of the arms shipped at the behest of Saudi Arabia and Qatar to supply Syrian rebel groups fighting the government of Bashar al-Assadare going to hard-line Islamic jihadists, and not the more secular opposition groups that the West wants to bolster, according to American officials and Middle Eastern diplomats.

France has emerged as the most prominent backer of Syria’s armed opposition and is now directly funding rebel groups around Aleppo as part of a new push to oust the embattled Assad regime.Large sums of cash have been delivered by French government proxies across the Turkish border to rebel commanders in the past month, diplomatic sources have confirmed. The money has been used to buy weapons inside Syria and to fund armed operations against loyalist forces.

President Francois Hollande said on Thursday that France had delivered weapons to rebels battling the Syrian regime of Bashar al-Assad “a few months ago.” 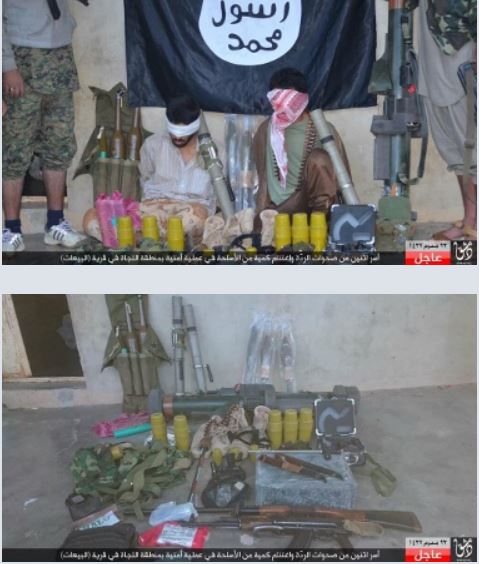 [T]wo of the most successful factions fighting Assad’s forces are Islamist extremist groups: Jabhat al-Nusra and the Islamic State of Iraq and Syria (ISIS), the latter of which is now amassing territory in Iraq and threatening to further destabilize the entire region. And that success is in part due to the support they have received from two Persian Gulf countries: Qatar and Saudi Arabia.Qatar’s military and economic largesse has made its way to Jabhat al-Nusra, to the point that a senior Qatari official told me he can identify al-Nusra commanders by the blocks they control in various Syrian cities. But ISIS is another matter. As one senior Qatari official stated, “ISIS has been a Saudi project.”

France benefited from its support for the U.S.-Wahhabi regime change project in Syria and Iraq by getting huge orders for military equipment from the medieval Wahhabi regimes:

Qatar has agreed to buy 24 Dassault Aviation-built Rafale fighter jets in a 6.3-billion-euro (4.55 billion pounds) deal, the French government said on Thursday, as the Gulf Arab state looks to boost its military firepower in an increasingly unstable region.

Even after it became obvious for everyone that the regime change project in Syria has led to an expansion of terrorism Hollande was still demanding the end of the Syrian state.

President François Hollande of France told the United Nations General Assembly on Monday that his country would “shoulder its responsibilities” in global efforts to end the fighting in Syria, but that the conflict could be resolved only if President Bashar al-Assad was removed from power.

Can Hollande now change his tune?