What Price Will Israel Pay For Annexing The Last Of Palestine?

Above photo: A demonstration in Tel Aviv’s Rabin Square to denounce Israel’s plan to annex parts of the occupied West Bank on 23 June. AFP.

Only when Israel starts paying a real price, will it have second thoughts about its project to establish itself as the only state between the river and the sea.

The systematic and collective appropriation of Palestinian land by the State of Israel is not an accident of British colonial history. Palestinians are not the Chagos Islanders of the Eastern Mediterranean, a people considered by the UK government to be too weak and scattered to bother about.

The dispossession of Palestinian land was a product of British foreign policy. Lord Balfour may not have intended a Jewish state when he issued his declaration in 1917 recognising the rights of Jews to set up a “homeland”, a deliberately ambiguous phrase. At that point, two percent of Palestine was owned by Jews.

In an exchange of letters with George Curzon, Balfour’s successor as foreign secretary, Balfour was unsupportive of the aspiration of the Zionist leader Chaim Weizmann for a Jewish state.

Balfour wrote: “As far as I know, Weizmann has never put forward a claim for the Jewish government in Palestine. Such a claim is in my opinion certainly inadmissible, and personally I do not think we should go further than the original declaration which I made to Lord Rothschild.”

However a Jewish state is exactly what Balfour, a Conservative peer in a Liberal coalition government, created.

Significantly, the only Jewish member of that cabinet rejected Balfour’s plan, as antisemitic. Edwin Montagu wrote in a memorandum: “Zionism has always seemed to me to be a mischievous political creed, untenable by any patriotic citizen of the United Kingdom.” 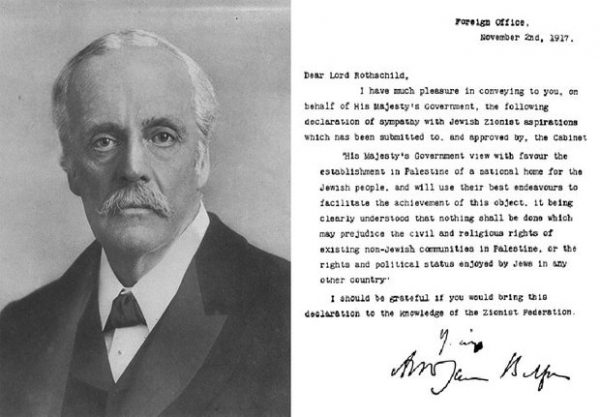 Nor did the British Labour Party fare better in 1948 at the end of the British Mandate. A statement written by the Labour Party’s national executive committee (NEC) and adopted by the conference in 1944 read: “Palestine surely is a case, on human grounds and to promote a stable settlement, for transfer of population. Let the Arabs be encouraged to move out, as the Jews move in. Let them be compensated handsomely for their land and let their settlement elsewhere be carefully organized and generously financed.”

In 1945 Prime Minister Clement Attlee initially resisted US President Harry Truman’s demands for the mass migration of 100,000 Jews to Palestine, an issue which strained the transatlantic relationship and incurred sanctions in the form of delays of US loans for the post-World War II reconstruction.

Files released in 2006 showed that MI5 was warned in 1946 that members of the Stern Gang were being trained “to go to England to assassinate members of His Majesty’s Government, especially Mr [Ernest] Bevin [British foreign secretary]”.

A memo from the Officer Administering the Government of Palestine to the secretary of state for the colonies warned: “The Stern Group have decided to assassinate both the High Commissioner and the General Officer Commanding. In addition, a number of CID officers are to be assassinated as well as police officers and any high government officials who are thought to be anti-semitic.”

The last of historic Palestine

When in 1947, the UN proposed the partitioning of the territory, Jews were allocated 55 percent of the land, although at the time they owned just seven percent, according to the historian Avi Shlaim. After the 1948 war, the newly established State of Israel seized 78 percent of mandatory Palestine.

So today, when a further chunk of the last remaining 22 per cent of historic Palestine is about to be bitten off in plans to annex part or most of the West Bank, neither a Conservative British prime minister nor the leader of the Labour Party can claim to be disinterested observers.

The 73 years of conflict that followed the establishment of the Jewish state is their baggage, whether they like it or not.

In Boris Johnson’s biography of Churchill, the man he has tried so hard to emulate, Johnson described the Balfour Declaration as “bizarre”, “tragically incoherent” and “an exquisite piece of Foreign Office fudgerama”.

A rare example of sound judgment and historical accuracy from the pen of Johnson, Shlaim notes.

But in power, Johnson has stuck like superglue to the script: weasel words of condemnation, but business as usual. In his answer to a parliamentary question from the Tory backbencher Crispin Blunt, Johnson said: “Yes, I believe that what is proposed by Israel would amount to a breach of international law. We have strongly objected. We believe profoundly in a two-state solution and we will continue to make that case.”

The charade of British foreign policy to this conflict is not so much to advocate a solution it knows will never be achieved now. It is to play the part of a handwringing bystander in the full knowledge that Israel will continue to enjoy impunity for its actions.

The Foreign Office of today is an heir worthy of Balfour himself.

The new Labour leader Keir Starmer fares no better. He said: “I don’t agree with annexation and I don’t think it’s good for security in the region, and I think it’s very important that we say that.”

Starmer hedged on the issue of sanctions: “There needs to be a strong working relationship where we are able to exchange views frankly, as you would with an ally, and on some of these issues, a frank exchange is what we most need, I think.”

This is a dust-down of the formula that Tony Blair used during his time as prime minister: the British government has to be close to Israel to influence it. This is of course a fiction, no more cynically maintained than by Israel itself.

Since Starmer’s words, Lisa Nandy, his shadow foreign secretary, has suggested a ban on the import of goods from settlements in the West Bank. At the moment, the EU merely demands the correct labelling of this produce.

This is supposed to deter Israel. It will not.

Britain now should do four things if and when Israel – or the US – announces annexation plans.

Firstly, it should declare the full recognition of the Palestinian state. Unlike the Labour Party in 1944, the Labour Party in 2018 decided to fully recognise the state of Palestine. Jeremy Corbyn has since expressed his concern that his successor as leader will abandon that position.

Another former Labour leader and member of Starmer’s shadow cabinet, Ed Miliband, led in 2014 a motion in parliament calling for recognition of the State of Palestine. It is now up to the leader to make good on that parliamentary motion.

This is as much a challenge for Starmer as it is for Johnson to make this official government policy.

Secondly, the British government should treat Israel as it does any other state that has annexed land in defiance of international law, like Vladimir Putin’s Russia did in the Crimea, and Saddam Hussein’s Iraq did with Kuwait. Both seizures of land were met with a response from the UK that held the state responsible, not shadowy and deniable groups of mercenaries. It produced sanctions that targeted the leaders of those states.

The same principle should apply to Israel. The only exceptionalism that Israel enjoys is one that allows it to do what it wants in the full knowledge that its leaders enjoy impunity for their actions wherever they are in the world.

Thirdly, Britain should stop all military trade deals with Israel.

And fourthly, Britain should downgrade its diplomatic relations with Israel and Israel’s nomination of its ambassador to replace Mark Regev should be rejected by the UK.

Even by the dubious standards set by previous holders of this office, this is an odious woman. Tzipi Hotovely, Israel’s settlements minister, has an appalling record of racist and inflammatory behaviour.

Those words are not mine, but are that of an anti-occupation group Na’amod who put up a petition signed by 800 British Jews.

In 2015 Hotovely said: “This land is ours. All of it is ours. We did not come here to apologise for that”. In 2011 Hotovely told a meeting of the Knesset Committee for the Advancement of Women: “We must confront the fact that the country has not valued education, which is the only way to prevent Jewish women from forging life connections with non-Jews,” Hotovely said.

“The struggle against assimilation only reaches headlines through stories about Jewish women marrying Muslim men, but it is important to remember that the phenomenon is much wider – 92,000 mixed families live in the State of Israel. There is a need to create a curriculum for girls in high schools that deals with Jewish identity. The fact that girls reach a state of intermarriage testifies to the fact that the education system was absent,” she added.

The day after an annexation plan is announced, Israel officially becomes an apartheid state. Exactly the state that Hotovely, a religious nationalist, advocates. It should be treated in the same way as other states that practised and preached the systemic separation and subjugation of peoples and their ethnic cleansing.

The price of Israel’s impunity for its actions is paid almost daily in Palestinian blood: Iyad al-Halak, a 32-year-old autistic man shot down by police on suspicion he was carrying a weapon. He was unarmed.

Ahmed Erekat was shot dead while driving through a checkpoint. The police claim it was a suspected car ramming. His family claim he was about to pick up his mother and sister on the day of his sister’s wedding.

He was left at the side of the road to bleed to death.

Only when it starts paying a real price, will Israel have second thoughts about its project to establish itself as the only state between the river and the sea.

David Hearst is the editor in chief of Middle East Eye. He left The Guardian as its chief foreign leader writer. In a career spanning 29 years, he covered the Brighton bomb, the miner’s strike, the loyalist backlash in the wake of the Anglo-Irish Agreement in Northern Ireland, the first conflicts in the breakup of the former Yugoslavia in Slovenia and Croatia, the end of the Soviet Union, Chechnya, and the bushfire wars that accompanied it. He charted Boris Yeltsin’s moral and physical decline and the conditions which created the rise of Putin. After Ireland, he was appointed Europe correspondent for Guardian Europe, then joined the Moscow bureau in 1992, before becoming bureau chief in 1994. He left Russia in 1997 to join the foreign desk, became European editor and then associate foreign editor. He joined The Guardian from The Scotsman, where he worked as education correspondent.