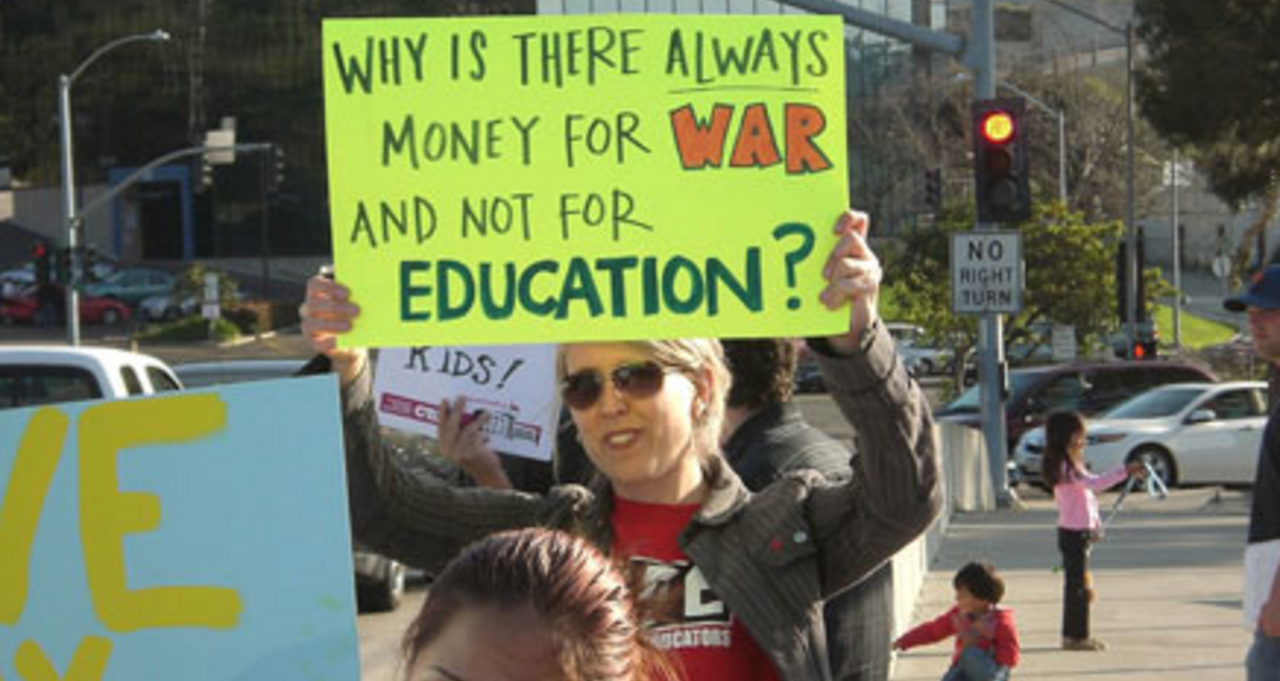 What Programs A 10% Cut In Military Spending Could Buy

Above photo: From WSWS.org.

NOTE: This week the US House of Representatives failed to pass an amendment to the military budget that would have cut it by 10 percent. Common Dreams reports:

“Anti-war groups vowed to keep fighting to slash the bloated Pentagon budget after the House of Representatives on Tuesday rejected a proposal to cut U.S. military spending by 10% and invest the savings in housing, healthcare, and education in poor communities.

The final vote on the National Defense Authorization Act (NDAA) amendment sponsored by Reps. Barbara Lee (D-Calif.) and Mark Pocan (D-Wis.) was <span”>93-324, with 139 Democrats joining 185 Republicans in voting no. The failure of the Lee-Pocan amendment means the final version of the House NDAA will propose a $740.5 military budget for fiscal year 2021, a more than $2 billion increase from the previous year.

‘Ninety-three members of Congress stood together to oppose a bloated $740 billion defense budget,’ Pocan, co-chair of the Congressional Progressive Caucus, tweeted following the vote. ‘Though our amendment didn’t pass, progressive power is stronger than ever. We will keep fighting for pro-peace, pro-people budgets until it becomes a reality.'”    – KZ

The United States devotes more money to its armed forces than the next 10 countries — combined.

For millions of Californians, times are tough, and the future looks tougher still. So far, California has seen over 325,000 confirmed cases of COVID-19 and over 7,000 deaths.

In the economic fallout, over 6 million of us have applied for unemployment insurance since the start of the pandemic. Many of them have yet to see a dime from the understaffed California Employment Development Department, which has struggled to keep up with the sheer volume of claims.

Meanwhile, a $600-per-week federal unemployment supplement is set to expire at the end of July, and the Republican-controlled Senate appears determined to let it expire rather than support a measure passed in the House of Representatives to extend it through January.

A look at the National Defense Authorization Act will shed some light on the kind of spending Congress may be quicker to approve, namely, over $740 billion in Pentagon spending this year. If that seems like a lot, it’s because it really, really is.

The United States spends more on its military than the next 10 countries combined. For those wondering whether that kind of astronomical spending is somehow necessary for national security, it’s not.

In fact a recent report by the Costs of War initiative explains how the United States’ unique brand of commercialized militarism, in which more than half of U.S. military spending in 2019 went to private contractors, has significantly increased the cost of the country’s military operations.

Moreover, the endless wars supported by our massive military budget haven’t been making us safer. Despite spending over $5 trillion on war since 2001, global deaths from terrorism have increased, while social and economic forms of security such as a functioning health care system, pandemic preparedness and jobs programs have all gone underfunded.

Californians are paying a staggering price for this excessive military spending. According to the National Priorities Project, the average California taxpayer paid the federal government $4,267 for the military in 2018. That’s compared to averages of $1,247 on unemployment and labor programs, $609 for housing and community programs, and $398 for education.

Thankfully, some members of Congress have been organizing to prevent this egregious misallocation of resources and instead invest in the communities that need it most.

Sens. Bernie Sanders, I-Vt., Ed Markey, D-Mass., and Elizabeth Warren, D-Mass., and Reps. Barbara Lee, D-Oakland, and Mark Pocan, D-Wisc., are pushing for an amendment to the defense authorization act that would redirect 10 percent of the Pentagon budget to fund education, health care, child care and housing for communities facing poverty rates of 25% or higher. Over 60 national civil society organizations recently sent a letter to the Senate in support of this long-overdue realignment of our national spending priorities.

To get a sense of what those cuts in Pentagon spending could mean for California, consider this: 10 percent of the roughly $100 billion Californians spent on the military in 2019 could cover the cost of employing roughly two-thirds of the state’s elementary school teachers for a year, or the cost of low-income health care for 5.8 million children for a year.

The Senate is expected to vote on the amendment soon. If you think we should look after each other right now rather than throw more money into the dumpster fires of U.S. militarism, your senators need to hear from you.

Gabe Murphy is a writer and peace advocate with a master’s degree in global studies from UC Berkeley.