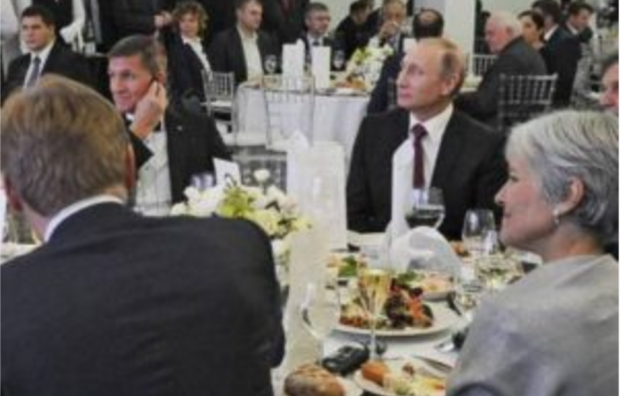 What Russia-Gate Has Wrought

Note: Robert Parry makes lots of good points in this article but I am not convinced Russiagate is over. It remains to be called to the forefront when Trump needs to be reminded who is in charge of US foreign policy. KZ

Exclusive: For five months, there was a daily drumbeat on Russia-gate, the sprawling conspiracy theory that Russia had somehow put Donald Trump in the White House, but suddenly the “scandal” disappeared, notes Robert Parry.

Democrats, liberals and some progressives might be feeling a little perplexed over what has happened to Russia-gate, the story that pounded Donald Trump every day since his election last November – until April 4, that is.

Since Trump took those actions – in accordance with the neocon desires for more “regime change” in the Middle East and a costly New Cold War with Russia – Russia-gate has almost vanished from the news.On April 4, Trump fully capitulated to the neoconservative bash-Russia narrative amid dubious claims about a chemical attack in Syria. On April 6, Trump fired off 59 Tomahawk missiles at a Syrian airbase; he also restored the neocon demand for “regime change” in Syria; and he alleged that Russia was possibly complicit in the supposed chemical attack.

I did find a little story in the lower right-hand corner of page A12 of Saturday’s New York Times about a still-eager Democratic congressman, Mike Quigley of Illinois, who spent a couple of days in Cyprus which attracted his interest because it is a known site for Russian money-laundering, but he seemed to leave more baffled than when he arrived.

“The more I learn, the more complex, layered and textured I see the Russia issue is – and that reinforces the need for professional full-time investigators,” Quigley said, suggesting that the investigation’s failure to strike oil is not that the holes are dry but that he needs better drill bits.

Yet, given all the hype and hullabaloo over Russia-gate, the folks who were led to believe that the vague and amorphous allegations were “bigger than Watergate” might now be feeling a little used. It appears they may have been sucked into a conspiracy frenzy in which the Establishment exploited their enthusiasm over the “scandal” in a clever maneuver to bludgeon an out-of-step new President back into line.

If that’s indeed the case, perhaps the most significant success of the Russia-gate ploy was the ouster of Trump’s original National Security Adviser Michael Flynn, who was seen as a key proponent of a New Détente with Russia, and his replacement by General H.R. McMaster, a protégé of neocon favorite, retired Gen. David Petraeus.

McMaster was viewed as the key player in arranging the April 6 missile strike on Syria and in preparing a questionable “intelligence assessment” on April 11 to justify the rush to judgment. Although McMaster’s four-page white paper has been accepted as gospel by the mainstream U.S. news media, its many weaknesses have been noted by actual experts, such as MIT national security and technology professor Theodore Postol.

But the way Official Washington works is that Trump was made to look weak when he argued for a more cooperative and peaceful relationship with Russia. Hillary Clinton dubbed him Vladimir Putin’s “puppet” and “Saturday Night Live” portrayed Trump as in thrall to a bare-chested Putin. More significantly, front-page stories every morning and cable news segments every night created the impression of a compromised U.S. President in Putin’s pocket.

Conversely, Trump was made to look strong when he fired off missiles against a Syrian airbase and talked tough about Russian guilt. Neocon commentator Charles Krauthammer praised Trump’s shift as demonstrating that “America is back.”

Trump further enhanced his image for toughness when his military dropped the GBU-43/B Massive Ordnance Air Blast Bomb (MOAB), nicknamed the “mother of all bombs,” on some caves in Afghanistan. While the number of casualties inflicted by the blast was unclear, Trump benefited from the admiring TV and op-ed commentaries about him finally acting “presidential.”

But the real test of political courage is to go against the grain in a way that may be unpopular in the short term but is in the best interests of the United States and the world community in the longer term.

In that sense, Trump seeking peaceful cooperation with Russia – even amid the intense anti-Russian propaganda of the past several years – required actual courage, while launching missiles and dropping bombs might win praise but actually make the U.S. position in the world weaker.

Trump, however, saw his fledgling presidency crumbling under the daily barrage of Russia-gate, even though there was no evidence that his campaign colluded with Russia to interfere with the U.S. election and there wasn’t even clear evidence that Russia was behind the disclosure of Democratic emails, via WikiLeaks, during the campaign.

Still, the combined assault from the Democrats, the neocons and the mainstream media forced Trump to surrender his campaign goal of achieving a more positive relationship with Russia and greater big-power collaboration in the fight against terrorism.

For Trump, the incessant chatter about Russia-gate was like a dripping water torture. The thin-skinned Trump fumed at his staff and twittered messages aimed at changing the narrative, such as accusing President Obama of “wiretapping” Trump Tower. But nothing worked.

However, once Trump waved the white flag by placing his foreign policy under the preferred banner of the neoconservatives, the Russia-gate pressure stopped. The op-ed pages suddenly were hailing his “decisiveness.” If you were a neocon, you might say about Russia-gate: Mission accomplished!

Besides whipping Trump into becoming a more compliant politician, Russia-gate could claim some other notable achievements. For instance, it spared the national Democrats from having to confront their own failures in Campaign 2016 by diverting responsibility for the calamity of Trump’s election.

Instead of Democratic leaders taking responsibility for picking a dreadful candidate, ignoring the nation’s anti-establishment mood, and failing to offer any kind of inspiring message, the national Democrats could palm off the blame on “Russia! Russia! Russia!”

Thus, rather than looking in the mirror and trying to figure out how to correct their deep-seated problems, the national Democrats could instead focus on a quixotic tilting at Trump’s impeachment.

Many on the Left joined in this fantasy because they have been so long without a Movement that the huge post-inaugural “pussy hat” marches were a temptation that they couldn’t resist. Russia-gate became the fuel to keep the “Movement” bandwagon rolling. #Resistance!

It didn’t matter that the “scandal” – the belief that Russia somehow conspired with Trump to rig the U.S. presidential election – amounted to a bunch of informational dots that didn’t connect.

Russia-gate also taught the American “left” to learn to love McCarthyism since “proof” of guilt pretty much amounted to having had contact with a Russian — and anyone who questioned the dubious factual basis of the “scandal” was dismissed as a “Russian propagandist” or a “Moscow stooge” or a purveyor of “fake news.”

Another Russia-gate winner was the mainstream news media which got a lot of mileage – and loads of new subscription money – by pushing the convoluted conspiracy. The New York Times positioned itself as the great protector of “truth” and The Washington Post adopted a melodramatic new slogan: “Democracy Dies in Darkness.”

On Thanksgiving Day, the Post ran a front-page article touting an anonymous Internet group called PropOrNot that identified some 200 Internet news sites, including Consortiumnews.com and other major sources of independent journalism, as guilty of “Russian propaganda.” Facts weren’t needed; the accused had no chance for rebuttal; the accusers even got to hide in the shadows; the smear was the thing.

The Post and the Times also conflated news outlets that dared to express skepticism toward claims from the U.S. State Department with some entrepreneurial sites that trafficked in intentionally made-up stories or “fake news” to make money.

To the Post and Times, there appeared to be no difference between questioning the official U.S. narrative on, say, the Ukraine crisis and knowingly fabricating pretend news articles to get lots of clicks. Behind the smokescreen of Russia-gate, the mainstream U.S. news media took the position that there was only one side to a story, what Official Washington chose to believe.

While it’s likely that there will be some revival of Russia-gate to avoid the appearance of a completely manufactured scandal, the conspiracy theory’s more significant near-term consequence could be that it has taught Donald Trump a dangerous lesson.

If he finds himself in a tight spot, the way out is to start bombing some “enemy” halfway around the world. The next time, however, the target might not be so willing to turn the other cheek. If, say, Trump launches a preemptive strike against North Korea, the result could be a retaliatory nuclear attack against South Korea or Japan.

Or, if the neocons push ahead with their ultimate “regime change” strategy of staging a “color revolution” in Moscow to overthrow Putin, the outcome might be – not the pliable new leader that the neocons would want – but an unstable Russian nationalist who might see a nuclear attack on the U.S. as the only way to protect the honor of Mother Russia.

For all his faults, Trump did offer a more temperate approach toward U.S.-Russian relations, which also could have tamped down spending for nuclear and other strategic weapons and freed up some of that money for infrastructure and other needs at home. But that was before Russia-gate.