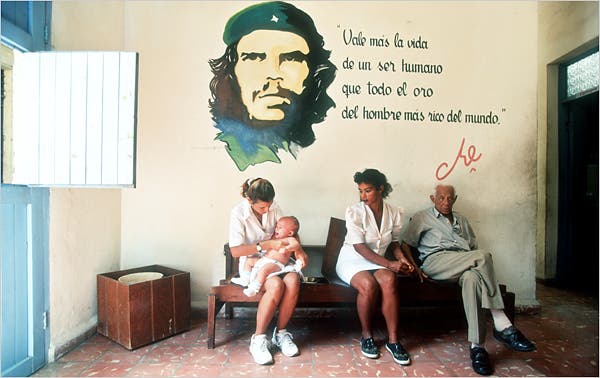 What The US Can Learn From Cuba’s Coronavirus Response

Healthcare For Human Rights, Not Profits

Cuba’s Remarkable Response To The Coronavirus Pandemic Highlights The Need For A Healthcare System That Puts People Before Profits.

For two years now, the Coronavirus pandemic has done irreversible harm to millions in the United States. To date, over 78 million confirmed cases of infection and over 940,000 deaths due to Coronavirus have been reported in the country. With the global spread of new variants such as Omicron, the average number of new confirmed cases in the U.S. just recently reached unprecedented levels, surpassing those of all previous waves.

Boasting the “biggest expansion of affordable healthcare in a decade,” the Biden Administration has yet to explain why over 2,500 people on average are reportedly dying every day from the virus – a record high. The so-called “biggest expansion of affordable healthcare” access clearly has its limits, as 31.1 million people in the U.S. remain uninsured during a deadly pandemic, and out-of-pocket medical bills for COVID-19 averaged a steep $3,800 per person in 2021.

The disastrous impacts of the pandemic shed light on the inherent failures of the U.S. healthcare system, which regardless of being the most costly in the world (19.7% GDP) continues to fall starkly short of global standards. The data speaks for itself: among high-income countries, the U.S. measures lowest in life expectancy, highest in infant and maternal mortality and second highest in low birth weight, despite ranking the highest per-capita healthcare expenditures.

International comparisons to U.S. health outcomes make clear that GDP (Gross Domestic Product) cannot reliably suggest a healthcare system’s quality. Defined by the International Monetary Fund (IMF) as “a monetary measure of the value of final goods and services,” GDP tells us nothing about the efficiency of health services or the accessibility of critical medical care such as vaccination, hospitalization and basic health exams – all important determinants of a healthcare system’s adaptability when emergencies put pressure on our health infrastructure.

This is particularly true in the case of Cuba. Even in the face of an economic blockade obstructing the shipment of critical medical supplies such as syringes and other basic materials, Cuba has already vaccinated 93% of its population against Coronavirus. Since the initiation of the state’s vaccination campaign in August of 2021, Cuba now has one of the highest Coronavirus vaccination rates in the world, with daily infections having drastically declined. In contrast, only 65% of the U.S. population is currently vaccinated against Coronavirus (despite the nation’s surplus of vaccines), and daily infections in the U.S. just reached record highs this January.

Perhaps no other country provides a better example of an antithesis to the failed U.S. healthcare system than Cuba, which in its own constitution affirms the right to health as a fundamental and inalienable human right. Whereas no priority is given in the U.S. to the ratification of international human rights treaties regarding the right to health, Cuba’s nationalized healthcare system ensures that its medical services are completely free and accessible to all at a tenth of the cost of GDP per-capita spending in the U.S.

Despite spending only $813/person annually (compare that to $9,403/person in public and private spending combined in the U.S.) Cuba’s publicly funded and centrally planned healthcare model proves more efficient in disease control and prevention than the mostly privatized and fragmented insurance-based U.S. healthcare system. Since the establishment of the national immunization program in 1962, Cuba’s investment in medicine and the biotech industry has achieved the elimination of six diseases, the development of eight vaccines domestically (including five COVID-19 vaccines), protection against 13 diseases and the export of hundreds of millions of vaccines a year to over 40 countries. Even throughout the Coronavirus pandemic, the overall rate of mortality from infectious diseases in Cuba remains less than 1%.

According to the Pan-American Health Organization, Cuba has the lowest mortality rate for COVID-19 in Latin America (0.9% as of December 2021). As Alejandra Garcia, journalist for Resumen News, explains, “during the most recent wave of the Omicron variant, new cases in Cuba did not exceed or even come close to the previous peak caused by the Delta strain. This result contrasts sharply with most other countries in the world.” Meanwhile in the United States, where the COVID-19 mortality rate currently stands at 1.2%, so-called “excess deaths” from COVID-19 and other causes increased at least 23% during the first year of the pandemic.

Cuba recently became the first country to immunize its pediatric population (5-18 years old) against major infectious diseases. As a result of high childhood vaccination rates, children in Cuba today are inoculated against Coronavirus as well as numerous other diseases, such as polio, diphtheria, measles, rubella and whooping cough. Lissette López González, Cuba’s National Director of Pediatrics, explains to Resumen News, “this has marked a milestone not only for the Caribbean nation but for the world that today admires Cuba and its immunization strategy that sought to protect all people, including children.” In contrast, only 74% of children in the U.S. have received all CDC-recommended vaccines.

The incredible success of Cuba’s immunization programs can be attributed to both the efficiency of its centralized planning and the public’s trust in its healthcare system – a must for any vaccine rollout to be effective. Unlike in the United States, Cuba’s vaccination programs are not impacted by vaccine hesitancy or skepticism. The vast majority of Cubans choose immunization, whereas low vaccination rates among at-risk populations in the U.S. often reflect distrust in a medical system that has historically abused women, the disabled, and Black, Brown and Indigenous peoples as test subjects in experimentations and studies.

Widespread participation in Cuba’s vaccination program reflects the public’s confidence in a healthcare system that puts their lives before profits. As explained in an open letter from Cuban doctors to the Biden Administration, several factors explain the program’s success:

One of the most striking and successful attributes of the Cuban healthcare system is its holistic approach to wellness, which focuses on improving baseline health outcomes. Unlike in the United States, where specialized care services, prescription drugs and high-paying administrative jobs comprise most national per-capita health spending, Cuba’s healthcare system invests first and foremost in primary care for the prevention of disease and chronic conditions. Family doctors work in neighborhood clinics throughout the country, and annual check-ups include comprehensive health exams for the determination of health risks and preventable conditions. As BBC has described, this preventative approach to healthcare ultimately eases pressure on hospitals, allowing for a more efficient allocation of resources and better quality care for hospitalized patients.

Meanwhile in the United States, millions of uninsured people can’t afford the “out-of-network” costs of annual checkups, an inequity in healthcare access that results in thousands of preventable deaths a year. For a significant percentage of the U.S. population without employment-based health insurance, access to medical care is not necessarily guaranteed in states across the country that have opted out of expanding Medicaid (such as Texas, where at least 18.4% of non-elderly adults are uninsured). Even among the insured, at least 56% of U.S. adults report that they can’t afford the predatory pricing of medical care and expensive copays required by their insurance plans, a socioeconomic crisis that puts millions of people a year (one in three U.S. adults) in medical debt.

Unlike in Cuba, the so-called direct-fee and multi-payer healthcare system of the U.S. requires most patients to pay for their own medical care with the aid of private insurance agencies, which rarely provide affordable options to low-income workers. Not even the insurance is free – as of 2020, the average cost of health insurance for families excluding copays was $1,152/month. For many, that amounts to more than an entire month’s wages.

Unaffordable healthcare expenses prohibit millions in the U.S. from accessing basic health assessments that could prevent health issues in the longer term. According to human rights scholar and healthcare policy analyst Martha Schmidt, “even before COVID and after the so-called Affordable Care Act, tens of thousands of people were dying prematurely by our not having a single-payer [publicly financed] healthcare system. This is a huge number and it barely registers with many human rights activists.”

When put into a global context, it becomes clear that the root causes of our public health crisis are the unique characteristics of the U.S. healthcare system. Privatization, deregulation and profit motivation – tenets of neoliberal capitalist economics and foundations of the U.S. political economy – reflect themselves in the dysfunctionalities of our social welfare system, particularly our healthcare system.

Not only is our healthcare system ineffective; it’s also contingent on the commodification of care and devaluation of human life. Whereas the Cuban healthcare system works to prevent (and, when needed, cure) disease, our healthcare policies are designed to make basic health services inaccessible to millions of poor and working class people who can’t afford it – the criminally high price paid for maintaining a for-profit healthcare system in the hands of private corporations.

In its typical arrogance, our federal government continues to behave as if it is above international law. Instead of tightening its economic blockade on Cuba and diverting over $700 billion in taxpayer funds to “national defense,” the Biden Administration should focus its attention on its own shameful healthcare system and learn from Cuba’s life-saving example. It should recognize that the human right to health is not up for debate – anywhere – and work to ratify Article 25 of the United Nations’ Universal Declaration of Human Rights, which affirms the universal right to medical care and social services necessary for an adequate standard of living.

One can dream that we’ll live to see the day when the cost of vital medical care is no longer the private burden of a country’s people, but everyone’s fundamental right under a publicly-financed national healthcare system. Until then, we can marvel at the example Cuba has set for the world.