By Marie Brunerie, Dcmediagroup.us
December 7, 2018
| Resist!
What The ‘Yellow Vests’ Movement Tells Us About The Massive Level Of Discontent In France2018-12-072018-12-07https://popularresistance-uploads.s3.amazonaws.com/uploads/2017/12/popres-shorter.pngPopularResistance.Orghttps://popularresistance-uploads.s3.amazonaws.com/uploads/2017/12/popres-shorter.png200px200px

Above Photo: The Gilets Jaune, or Yellow Vests, fill the Champs Elysee./Photo by KRIS AUS67/Flickr

France has been rocked in recent weeks by nationwide protests. Demonstrators, wearing the high-visibility yellow vests that motorists are required by law to carry in their cars, have blocked roads, gas stations, tore down signs, tore up paving stones and set up barricades. The protests have been most visible in urban areas, where luxury cars have been set on fire. Some car crashes related to the blockades have resulted in deaths. Police have responded violently with tear gas, water cannons and pepper spray. Hundreds of demonstrators have been injured.

The motive of the “Yellow Vests” demonstrators is often attributed simply to a new fuel tax, but the reality is, not surprisingly, more complicated than that. French teacher and journalist Marie Brunerie tells us what the movement is really all about.

Watching the news on TV and seeing the Champs Elysée vandalized by rioters, you might think that a new French Revolution is currently underway. Well, it is to some extent. But to grasp the real significance of the social unrest going on, it is necessary to stop for a moment and closely analyze this so-called movement of the “yellow vests.”

It all started three weeks ago when a social media-launched campaign against the announcement of a price hike on fuel turned viral and almost instantaneously rallied tens of thousands of people. “Enough is enough!” they cried out. The tax rise was aimed at injecting money into a climate-related support program. But, yet another tax increase was too hard to swallow for these working- and middle-class citizens who both feel–and objectively are–written off. Average citizens gathered at traffic circles in mass protests to show their despondency, all sporting the yellow safety vests required to be carried in every car. The vast majority of them were protesting for the very first time in their lives.

The government pledged to provide subsidies for the purchase of less polluting cars–which no one can be against, of course–except when these people simply cannot make ends meet. Among the protesters interviewed, the same answer was repeated over and over again: “How can I even think of buying an electric car when I can’t pay for my rent and I am out of cash by the tenth day of the month?!”

At first, it brought together diverse if not completely incompatible groups–low-income employees, single moms, self-employed small businesses entrepreneurs, as well as many pensioners and unemployed or minimum-wage workers), but now it draws the support of 75% of the French population who are fed up with the inequity of our tax system. France is indeed, as we all know, a heavily taxed country, but everybody agrees that sending their kids to school for free from elementary school to university or not paying for medical expenses (our world-famous and much envied “social security system”) has a price.

The problem is that one of the very first steps taken by President Emmanuel Macron after his election 18 months ago was to suppress the so-called “fortune tax” benefiting the wealthiest 1%. Macron’s economic goal through his tax reforms is to increase France’s competitiveness, having faith in the so-called “trickle-down” effect. But so far, it’s to no avail. The promise that everybody’s purchasing power would increase turned into a sad joke. What’s worse, the signal being sent by the “fortune tax” cancellation was not just symbolic. It revealed to those who hadn’t perceived it before, including many of his electors, that the economically ultra-liberal mindset of this president and his team who were elected in a very particular context, one which is worth remembering for our American readers. 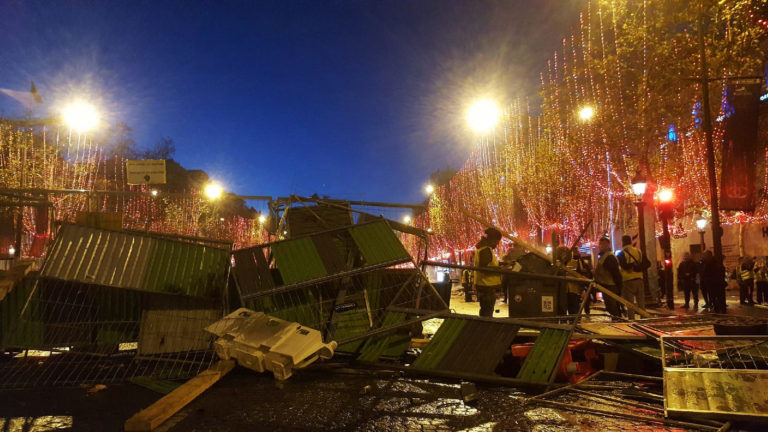 A barricade erected by the Yellow Vests on the Champs Elysees./Photo by Erder Wanderer/Flickr http://urbanauth.eu

From the promised road to modernity to “President for the rich”

So what turned President Macron’s honeymoon into such massive disapproval? Back to May 2017, election time in France: Emmanuel Macron was facing Marine Le Pen, the far-right leader of the “National Front Party,” now renamed “Rassemblement National” (National Gathering) in the second round of our presidential election. Of course, some people did vote for him out of sheer enthusiasm–he was a young, dynamic and promising president who pledged to reform the country towards modernity. That is how the international press presented this refreshing candidacy for sure! Yet it would be misleading not to acknowledge that during this second round a much more significant number of voters voted against Le Pen rather than for Macron and that during the first round two weeks earlier (April 23, 2017), he had won only 24% of the vote (21% for Le Pen and 20% for both far-left candidate Mélenchon and traditional right candidate Fillon). Clearly not a mandate.

After the tax relief on the rich, Macron’s attitude towards “the people” oscillated between contempt and sheer blindness toward the most economically fragile. The silence and scorn of the “En Marche” representatives (President Macron’s party) and Ministers over the fuel crisis only fueled the wrath over the past few days, made worst by TV news channels apparently rejoicing in the exciting non-stop mayhem taking place all over the country. To make things worse, the authorities have remained silent for too long and officially reacted only when the damage was done: Last Saturday the Arc de Triomphe was vandalized by rioters who wore yellow jackets in order to infiltrate the crowd.

“We don’t want the breadcrumbs, we want the whole French baguette!”

In an official and much-awaited announcement broadcast live on TV on December 4, the Prime Minister did nothing more than announce a six-month postponement of the tax hike while blackmailing the French. In a nutshell, his message came down to: you want tax cuts, beware! The quality of your public services will suffer from this. This is disgraceful, for the French are no idiots, and they know that the money is there. France IS a rich country… or it could be, were the tax revenues equitably redistributed.

The historical parallel of the Yellow Vests with the 1789 “sans-culottes” is regularly made, but I tend to see instead a likeness to the Occupy Wall Street movement. The fight is economically based, nothing to do with cutting off the
heads of monarchs! The “We are the 99%” mantra well-known to you has started resonating in France–albeit with nearly a decade’s delay!–and the French simply cannot accept that the worse-off get poorer and poorer while the rich only get richer.

Had the government and President reacted immediately three weeks ago to discontent with the fuel tax, tensions would almost certainly have been soothed. But now is the winter of our discontent. There is no need to be Shakespeare to grasp the level of frustration and anger pervading French society. Now exposed to absolute mayhem in the streets, many French citizens fear the long-term political impact of such scorn from elites: the outcome of the European elections next spring and of our next presidential election in 2020 which might well, this time, see the darkest populist forces at play seizing their moment.