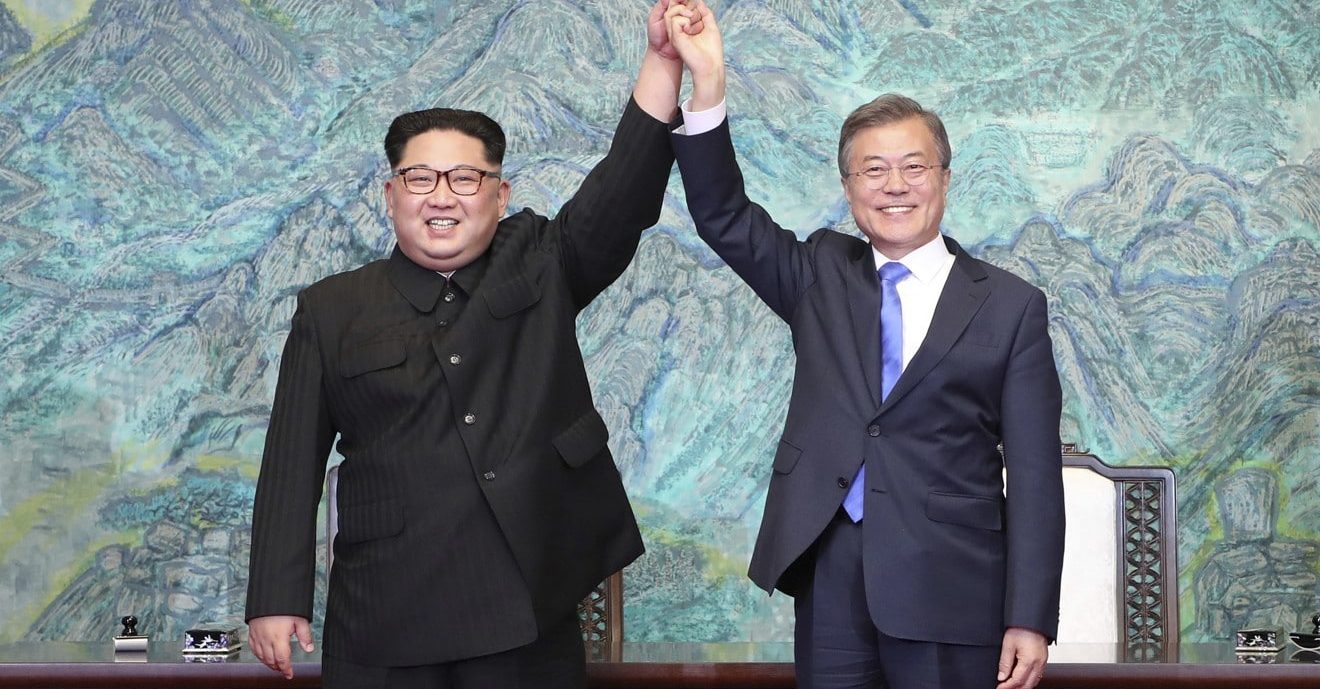 What Trump And Biden Get Wrong About North Korea

At last week’s presidential debate, the American people were presented with two widely divergent points of view on how to address North Korea’s growing nuclear arsenal: Either engage with its leader (and thereby “legitimize” a “thug”) or apply more sanctions and pressure in order to “control” North Korea.

But this is a false dichotomy. Meeting or not meeting with the North Korean leader hasn’t been the failure of U.S. policy. And more pressure and sanctions will not convince North Korea to give up its nuclear weapons arsenal.

To make any substantial progress, the next administration must take a wholly new approach to achieve a nuclear-free Korean Peninsula.

Most urgently, the next administration should officially end the Korean War with a peace agreement. Contrary to the belief held by most Americans, the 70-year-old war never officially ended and was only halted by a fragile ceasefire signed in 1953. That means that the risk of an escalation (intentional or accidental) that triggers a full-scale — potentially nuclear — war remains, endangering us all.

Both the Trump and Obama administrations depended on a mixture of sanctions, political isolation, and the threat of military force to try to compel North Korea to abandon its nuclear weapons program. But both “maximum pressure” (Trump) and “strategic patience” (Obama) failed to make progress toward that goal. A positive step was the 2018 Singapore Agreement in which the United States and North Korea agreed to establish new relations toward a peace regime and a nuclear-free Korean Peninsula. While North Korea has improved its military capability, it has not tested any long-range missiles or new nuclear weapons since then.

But since last year’s Hanoi Summit, talks between North Korea and the United States have stalled. That’s because engagement with North Korea was not accompanied by a fundamental change in U.S. policy. The United States keeps expecting that pressure will convince North Korea to unilaterally disarm without providing any sanctions relief or security guarantees.

What actually put the prospect of denuclearization on the table was the possibility of peace that began with the 2018 Olympics diplomacy between North Korea and South Korea. It manifested in the Panmunjom Declaration, in which President Moon Jae-in and Chairman Kim Jong Un declared “that there will be no more war and a new era of peace has begun on the Korean peninsula.” The Declaration calls for inter-Korean economic and civic projects and replacing the Armistice Agreement with a peace agreement. But the United States has impeded these reconciliation efforts.

Instead of further militarizing the region and applying more sanctions and pressure, which are harming innocent North Korean civilians, the next administration should engage in the hard work of sustained diplomacy based on specific, concrete next steps. Diplomacy isn’t a “gift” to North Korea; it’s what needs to happen to get to peace. Talking with North Korea should not be viewed differently from what Washington does with any authoritarian power. Ignoring North Korea only kicks the can down the road in addressing Pyongyang’s growing nuclear capabilities and arms proliferation. Furthermore, a majority of Americans support the United States negotiating with adversaries like North Korea to avoid a military confrontation.

Specifically, the next administration should replace the “all or nothing” stance with step-by-step, reciprocal, verifiable actions to advance denuclearization and peace. That could mean building confidence through opening liaison offices, easing sanctions, facilitating reunions between Korean-American families and their loved ones in North Korea, and formalizing a moratorium on North Korean long-range missile and nuclear testing and U.S.-South Korea military exercises.

But most crucially, we must end the Korean War. This continued state of war is not a mere technicality; it’s the root cause of militarism and tensions that must be resolved if there is to be real progress with North Korea.

The good news is that there are growing voices in Congress that recognize the importance of peace with North Korea as a crucial step towards denuclearization. There are now 50 members of Congress who have co-sponsored House Resolution 152, which calls for an end to the Korean War and a peace agreement. Notably, all of the Democratic contenders for the next chair of the House Foreign Affairs Committee — Reps. Brad Sherman, Joaquin Castro, and Gregory Meeks — are co-sponsors of this important resolution.

The status quo means more nuclear weapons, more human rights violations, more separated families, more suffering from sanctions, and the ongoing risk of nuclear war. It’s in everyone’s interest to change course with a realistic, concrete plan toward peace and denuclearization, but this is ultimately in the hands of the next U.S. president. Americans must urge him to choose wisely.