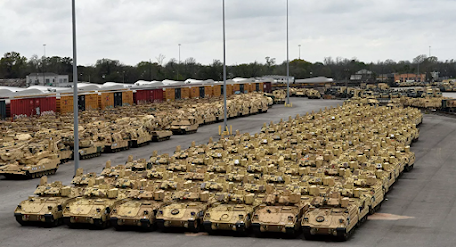 What Was Washington’s Real Agenda At Russia Meeting?

Above Photo: A US weapons hub at a base in Poland. Each time the Pentagon holds a war-game in eastern Europe weapons are shipped from the US and stored afterward at this hub and a similar one in Norway virtually on the Russian border.

When I was a union organizer with the United Farm Workers I twice served on a contract negotiating committee – as the note-taker. I learned that the very first clause negotiated in any union contract is the ‘Recognition’ by the company of the union’s right to bargain on behalf of the workers.

This recent meeting between Russia and U.S. in Geneva proved to me that Washington does not recognize Russia as an equal bargaining entity. Instead the US arrogantly believes it can pre-determine its policy – in this case steroidal NATO expansion and regime change in Russia. This is clearly the US agenda.

Washington and Brussels (and London of course) can’t afford to recognize Russia as an equal. They must keep demonizing Moscow and Putin to stay ‘relevant’ in the world today as the west declines and China, Russia, Iran and others in the global south rise.

Plus we must always remember that there is big money at stake for the military industrial complex as they believe they can ride this aggressive wave another 50 years. So what if it leads to WW III and nuclear Armageddon.

Thus the US delegation left the meeting on January 11 and said, “We have your demands. We’ll let you know in a week our response.” I don’t expect much.

Just so we all remain clear, these so-called ‘unreasonable’ demands by Russia (listed below) are quite rational and appropriate when you consider that the US-NATO are deep in the process of creating a Cuban Missile Crisis in reverse for the Russian Federation.

Who is actually being peaceful and rational – the US-NATO or Russia? 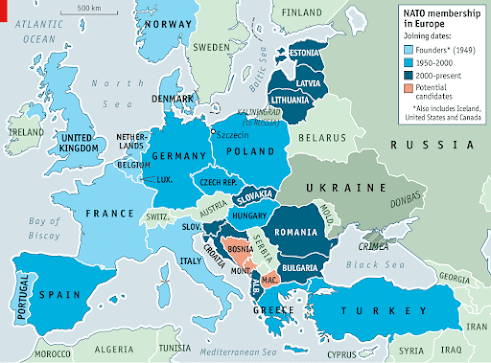 Russian demands in negotiations with US:

I went looking for some comments on this current situation and of course the Washington Post and New York Times buried the story. So the only thing the people in the US know is that Joe Biden sent his team to Geneva to threaten Russia not to invade Ukraine.

Below are some good comments that I think cover many elements of this story. First though we must hear from Washington officialdom.

This bit  from a statement signed by Democrat and Republican warhawks.

The West should also widen its political counteroffensive to retake the initiative from Moscow as it tries to use the threat of force to intimidate Ukraine, Europe, and the United States into acquiescing to its demands, many of which are plainly unjustified and unacceptable.

Dr Paul Craig Roberts, no stranger to the inner workings of the Deep State, put it rather starkly recently:

When Putin says Russia has nowhere left to which to retreat, he is telling the idiot West that Russia has reached the extent of its ability to avoid war. ‘We simply have no room to retreat’ means Russia has done all she can do to avoid war and now the Americans must get off Russia’s doorstep.

U.S. Deputy Secretary of State Wendy Sherman faced off against Russian Deputy Foreign Minister Sergei Ryabkov in Geneva, with the fate of Europe in her hands. The sad thing is, she doesn’t see it that way. Thanks to Biden, Blinken and the host of Russophobes who populate the U.S. national security state today, Sherman thinks she is there to simply communicate the consequences of diplomatic failure to Russia. To threaten. With mere words. What Sherman, Biden, Blinken, and the others have yet to comprehend is that Russia has already weighed the consequences and is apparently willing to accept them. And respond. With action.

Russian and US officials spoke for nearly eight hours in Geneva on Monday to discuss a pair of Russian security proposals Moscow says would dramatically ease tensions between Russia and the Western alliance. Among the proposals’ points is a firm demand by Russia that NATO halt its decades-long eastward expansion. The North Atlantic Treaty Organization will not drop its ‘open door’ policy on membership, and will pay no mind to Russia’s request to limit troop and weapons deployments in countries which joined the bloc after 1997, Julianne Smith, US ambassador to NATO, has said.

The Donetsk News Agency (from the Donbass region in Ukraine that is constantly attacked by the US installed regime in Kiev following the 2014 coup) reports on continued shelling on the Donetsk People’s Republic and the Lugansk People’s Republics by the US-NATO armed and directed Ukrainian Army.

Ukrainian side is determined to provoke DPR to open retaliatory fire, the head of the DPR Mission to the JCCC Ruslan Yakubov said commenting on the deteriorating security situation along the line of contact. “Domestic and international situation prompts Ukrainian leadership to commit armed provocations. The situation is aggravated by artificially fueled by media tension around the so-called “Russian aggression”. It seems that the target of  the Ukrainian armed forces is to provoke DPR retaliation to escalate (the situation), including the media background. “The recent attacks on the DPR were carried out by nationalistic [Nazi] formations deployed to the contact line since mid-December. The security situation along the contact line deteriorated on January 9 as Kiev forces intensified barrages of frontline areas in the DPR and LPR.

Following the collapse of the Soviet Union in 1991, the U.S.-led Western powers became deluded with arrogant entitlement. As Alex Krainer points out, the Western empire-builders presumed to have the right to wage wars and flout international law. For much of the past three-decade period, Russia was too weak economically and politically to challenge this reckless aggression. But now it has grown strong enough to “check-mate the empire’s global ambitions”. This is why war or regime change in Russia has become an obsessive goal for the U.S. and Western partners. It accounts for the relentless sanctions, Russophobia and surge in tensions over Ukraine and more recently Kazakhstan. Russia is perceived as an obstacle to Western control over the strategically vital Eurasian continent. The prize of Eurasia has long been coveted by Western imperialists, from the British Empire’s Sir Halford Mackinder to the U.S. strategist Zbigniew Brzezinski. As Krainer notes, it was this imperial calculation by the Anglo-American capitalists that led to the building up of Nazi Germany as a bludgeon to destroy the Soviet Union and purportedly to give the empire-builders global hegemony. This imperial machination led to World War II and the greatest conflagration in human history with as many as 85 million dead. The Soviet Union and China accounted for more than half of the death toll. In August 2018 in a briefing to the U.S. Senate Foreign Relations Committee by the U.S. Assistant Secretary of State for European and Eurasian Affairs, Wes Mitchell stated that the “central aim of the [Trump] administration’s foreign policy is to defend U.S. domination of Eurasian landmass as the foremost U.S. national security interest and to prepare the nation for this challenge.” Mitchell also said that the administration was “working with our close ally the UK to form an international coalition for coordinating efforts in this field.” Now, if Russia reasserts itself as the dominant power in Eastern Europe, this pretty much check-mates the empire’s global ambitions, so containing Russia and limiting its influence in Europe is absolutely critical and I think they will not give up on this even at the price of a nuclear war.