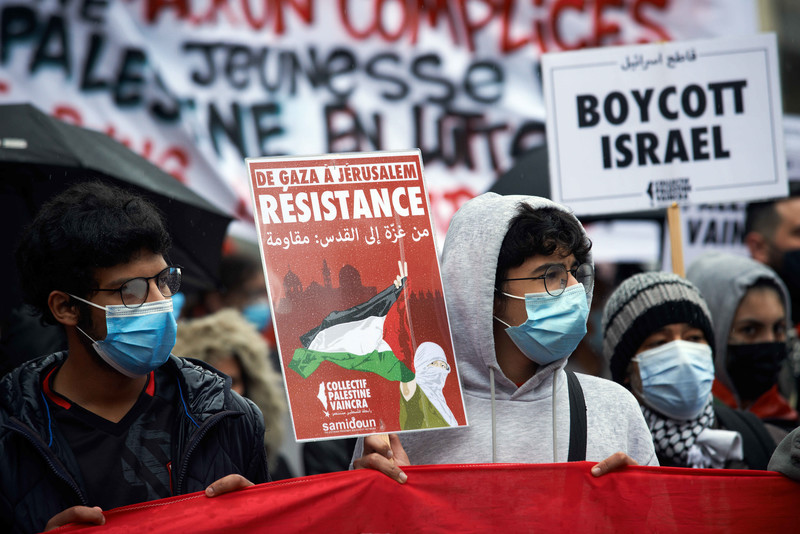 What Were The Top BDS Victories Of 2021?

Despite the ongoing COVID-19 pandemic, 2021 was a year of accelerated boycott, divestment and sanctions (BDS) campaigning, successful grassroots actions and significant legal victories for Palestinian rights.

Sustained direct actions in Oakland, California successfully exacted a price on Israel after it carried out a lethal 11-day attack on Gaza during May.

In early June, as part of an international wave of protests under the banner of #BlockTheBoat, activists and longshore workers prevented an Israeli cargo ship from docking at the city’s port for more than two weeks after its scheduled arrival date.

The vessel ostensibly attempted to avoid the picket line, and left the Bay Area port with its cargo intact.

And in the UK, protesters with Palestine Action forced Israeli arms factories to shut down operations at several of their 10 locations in Britain.

Palestine Action – formed during 2020 – carried out more than 70 actions against Elbit in its first year, including 20 high-profile occupations of sites and factories.

After years of organizing in the US and by Palestinian boycott campaigners, Ben & Jerry’s – the ice cream maker owned by Unilever – announced in July it would no longer sell its products in illegal Israeli settlement colonies, saying such sales were “inconsistent with its values.”

Israeli leaders and lobby groups melted down over the news, using smears against the ice cream company and its board members.

Yair Lapid, Israel’s foreign minister, vowed to lean on the more than two dozen US states that have passed anti-BDS measures to “enforce these laws against Ben & Jerry’s,” while Prime Minister Naftali Bennett promised to “act aggressively” against the ice cream maker.

But amid the threats, the company has so far defended its decision.

The Palestinian BDS National Committee has urged Ben & Jerry’s to “end all operations in apartheid Israel.”

In late December, a notorious anti-Palestinian blacklisting site named the company’s board chair as its “top anti-Semite of the year,” prompting civil rights group Palestine Legal to remark how such accusations ring hollow.

That this decision was voted the most egregious example of “antisemitism” in 2021 tells you more about what it means when stopantisemitism and other Israel advocacy groups cry w̶o̶l̶f̶ antisemite than it does about Anuradha Mittal.

“The decision by Ben & Jerry’s to stop profiting off of Jewish-only settlements built on stolen land is the bare minimum the brand could do to live up to its advertised commitment to social justice,” the group stated.

Here are some more of the top BDS victories for Palestinian rights as covered by The Electronic Intifada in 2021.

A major UK local government pension fund divested from Israeli arms maker Elbit Systems. Though the pension fund initially tried to deny that the move related to the company’s role in violence against Palestinians, campaigners had flooded the office with demands to drop Elbit from its portfolio.

The chair of the council’s pensions committee nonetheless conceded that Elbit had been excluded by its new investment manager, Storebrand, “due to human rights and international law reasons.”

Storebrand is a Norwegian firm which excludes Elbit due to human rights concerns.

New Zealand’s $33 billion national pension fund announced this year that it had excluded five Israeli banks from its portfolio because of their role in financing Israeli settlements in the occupied West Bank.

An assessment by the NZ Super Fund concluded that holding shares in Israel’s biggest banks would violate its responsible investment policy.

Norway’s largest pension fund KLP dumped 16 settlement profiteers because it said there is “an unacceptable risk” that they will contribute to human rights violations.

A lawmaker in Finland introduced a bill in December that would ban the import of goods from Israeli settlements built on occupied Palestinian and Syrian land.

In September, the European Union was forced to register a European Citizens’ Initiative that seeks to block trade with settlements in occupied territories.

The measure could potentially close off the lucrative access to EU markets enjoyed by businesses operating in Israeli settlements built on Palestinian land in violation of international law.

Following similar federal court decisions in Arizona, Kansas and Texas, an anti-BDS measure in Arkansas was declared unconstitutional in February.

A US federal appeals court ruled that the 2017 state law requiring state contractors to declare they will not boycott Israel was a violation of free speech.

“This is the first federal appeals court to decide on the constitutionality of anti-boycott laws, and with this decision not a single anti-BDS law has been upheld on the merits,” Palestine Legal stated.

“Every law that has survived a legal challenge has done so through legal tricks to avoid a constitutional analysis,” the group added.

In January, a Spanish court dismissed a criminal complaint alleging hate crimes against eight BDS supporters – a major win for the right to boycott Israel in that country.

The court ruled that the activists were exercising their right to free expression in pursuit of legitimate political goals.

The judges cited a landmark decision in June 2020 by the European Court of Human Rights affirming that urging a boycott of Israel over its policies is not discrmination, but protected political speech.

The activists hailed their victory as a sign of how “the global Zionist strategy and [attempts by] its far-right allies to delegitimize the BDS movement are failing.”

In the US, even as the Biden administration reanimated Trump and Obama-era policy pledges to fight BDS – with the Israel lobby demanding the new president escalate attacks on college activists – students won a precedent-setting legal victory.

A California judge ruled in March against demands by an anti-Palestinian litigant to be able to harass human rights activists over their support of BDS and Palestinian rights.

It marked the first time that a US court “has acknowledged the McCarthyite environment faced by those speaking out for Palestinian rights,” according to civil rights group Palestine Legal, which represented eight defendants along with other attorneys.

The decision “rejects the notion that students lose their constitutional rights when advocating for the rights of Palestinians at a public university,” Palestine Legal stated.

Singh’s move came after rank and file members of the party approved a motion to stop weapons deals with Israel.

The motion specified that the weapons trade between Canada and Israel must be suspended “until Palestinian rights are upheld.”

The vote “sends a message that progressive and human rights-minded people in Canada do not support the status quo and see sanctions on Israel as not only appropriate but necessary,” Amy Kishek, a lead organizer behind the resolution, told The Electronic Intifada in April.

Despite enormous pressure by Israel lobby-backed leaders and supporters of the UK Labour Party, delegates at the party’s September conference passed a resolution calling for sanctions and an arms embargo on Israel.

The resolution backs the International Criminal Court investigation into war crimes in the occupied West Bank and Gaza Strip.

It endorses other “effective measures” as “called for by Palestinian civil society” – an affirmation of the BDS movement that aims to end Israel’s violations of Palestinian rights and international law.

It also explicitly affirms “the right of Palestinian people, as enshrined in international law, to return to their homes.”

Earlier in the year, a poll of Labour Party members revealed that more than 60 percent support the BDS campaign.

In the same survey, almost half of those polled agreed with the statement that “Israel is an apartheid state, systematically discriminating against Palestinians.”

In the US, a March poll indicated that the majority of Democrats want the US to put more pressure on Israel.

Though many performers, cultural figures, writers and athletes had to cancel or postpone their tours, gigs and appearances due to the pandemic, a cadre of musicians ramped up campaigns to urge artists to not book shows in Israel.

Rage Against the Machine, Patti Smith, Noname, Vic Mensa, Thurston Moore and Run the Jewels were among the initial signatories of the Musicians for Palestine initiative, which has continued to attract supporters.

An Algerian athlete refused to compete against an Israeli in the Tokyo Olympic Games in July and braved administrative punishment by the International Olympic Committee.

Fethi Nourine forfeited a 26 July elimination match against Sudanese counterpart Mohamed Abdalrasool, as the winner of that round would have gone on to compete against Israel’s Tohar Butbul.

“Any competition held under the Israeli flag is a recognition of not only the state of Israel, but also of the legitimacy of their occupation of Palestinian land,” Nourine wrote on Facebook in late July.

His withdrawal eliminated the possibility of facing off against the Israeli.

Nourine explained that he refused to normalize with a representative of a “colonizer and an occupier.”

The athlete and his coach Amar Benikhlef were stripped of their Olympic accreditation and sent home.

And finally, best-selling Irish author Sally Rooney respected the boycott call in October by refusing to allow an Israeli company to buy the Hebrew translation and publication rights for her latest novel, Beautiful World, Where Are You.

The Palestinian Campaign for the Academic and Cultural Boycott of Israel (PACBI) hailed Rooney for joining “countless international authors in supporting the institutional cultural boycott of Israel’s complicit publishing sector.”

Rooney stated that she would be happy to sell the manuscript rights for Hebrew-language translation should it be possible to find a company that does not violate the principles of the BDS call.

“I simply do not feel it would be right for me under the present circumstances to accept a new contract with an Israeli company that does not publicly distance itself from apartheid,” Rooney said.