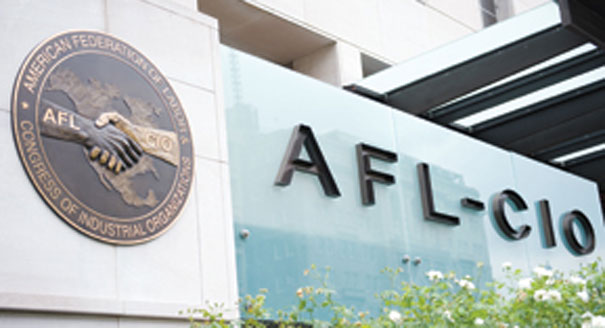 What Will Get The Labor Movement Moving? 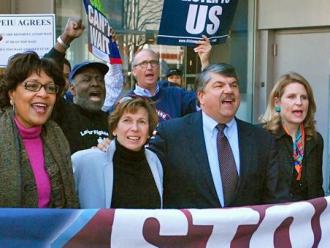 THE AFL-CIO ended its quadrennial convention this month by proclaiming a new departure for labor.

Among the many resolutions passed were welcome and progressive stands on behalf of voting rights, immigrant rights and the pro-LGBT Employment Non-Discrimination Act, and against mass incarceration, privatization and the dismantling of the U.S. Postal Service and the Philadelphia school system.

But the central element in labor’s “new direction” was a plan, approved by the convention, for opening the ranks of the AFL-CIO to anyone who wants to join, on an individual or group basis. In particular, federation President Richard Trumka extended invitations to join to “progressive allies”–organizations like the NAACP and the Sierra Club.

“The crisis for labor has deepened,” Trumka told the New York Times’ Steven Greenhouse in an article published right after Labor Day. “It’s at a point where we really must do something differently. We really have to experiment…It’s pretty obvious to all of our progressive partners that none of us can do it alone. If we’re going to change the political and economic environment, it’s going to take us all working together.”

WHAT ARE we to make of this new policy?

The first thing to say is that it’s not really new. Since at least the 1980s, the AFL-CIO has devoted much effort–and, no doubt, many dollars spent on consultants and focus groups–in coming up with ways for people to contact and join the labor movement without having to be organized through union representation at a workplace.

In the 1980s and 1990s, the federation tried offering access to mortgages, retail discounts and lower-interest credit cards. In 2003, it launched Working America as another bridge to nonunion working people. In addition to offering the earlier union-branded financial services, Working America helped to publicize issues facing workers generally, like lack of health care or a “voice” in the workplace.

But the main “activism” that Working America organized was get-out-the-vote efforts, phone banking and the like in support of Democratic electoral campaigns.

So if the AFL-CIO’s “new” policy openly invites constituents of Democratic-aligned organizations like the NAACP and National Council of La Raza to join it, the federation is merely ratifying a trend that has existed for years.

The only twist is that, in taking the decision to open itself to “progressive partners,” the AFL-CIO is diluting its distinctive character as a federation of unions representing workers organized in their workplaces, and embracing the broader swamp of Democratic Party interest group politics.

Ironically, it was left to one of the most identifiably pro-Democratic Party labor leaders, International Association of Fire Fighters President Harold Schaitberger, to state the case against the dissolution of the class-specific nature of the labor federation. While supporting labor’s allying with various groups, Schaitberger said: “This is the American Federation of Labor. We are supposed to be representing workers and workers’ interests. We are not going to be the American Federation of Progressive and Liberal Organizations.”

No doubt most liberals would consider Schaitberger’s argument to be narrow, and maybe even conservative. But Laura Clawson, labor correspondent for the Daily Kos website, drew out the implications:

This debate highlights an important point, that as progressive organizations have become increasingly funded by big donors and foundation grants, unions have increasingly stood out as among the few, if not the only, progressive groups funded in small-dollar increments by workers. And while super-rich donors embrace many progressive causes, from the environment to marriage equality, truly increasing worker power is rarely among them. It’s crucial for unions to build alliances and work with groups like the Sierra Club or the NAACP, but that must not come at the expense of workers’ voices in the labor movement.

Given that the AFL-CIO and other unions have acted as the Democrats’ foot soldiers for generations, perhaps its 2013 decision is merely the case of theory catching up with practice. On the other hand, it’s not as if the practice has successfully resisted attacks on workers and their unions.

So why would this strategy, whether formalized or not, work today? If the goal is to streamline the electoral infrastructure of the Democratic Party, there may be a 50/50 chance of success. But if the goal is to arrest labor’s organizational decay in workplaces and its declining social influence, the AFL-CIO’s “new direction” has about as much chance of achieving that as I have of winning the PowerBall lottery.

That’s because the solution to labor’s decline isn’t better marketing or outreach to allies–it’s showing nonunion workers that they have something to gain by working to build and to join a union. Retired autoworker militant Gregg Shotwell made precisely this point in reference to his union, the United Auto Workers:

The UAW strategy of company-union partnership and contract concessions has not only failed to preserve membership and improve workers’ lives, it undermines the union’s ability to organize…

Dawn Azok, a statewide industry reporter for Alabama Media Group wrote: “Key issues among employees supporting the effort [to organize a Mercedes assembly plant located in Tuscaloosa County, Alabama] are the desire for a better pension plan, as well as more say in work-scheduling and ergonomics issues.”…

Sound familiar? It should. UAW contracts have eliminated everything these potential union members at Mercedes in Alabama want: from pensions, to raises, to a say in “work-scheduling.” UAW office rats endorse the abuse of temps. We also have the “buddy-buddy” system, whereby UAW members are appointed to work side-by-side with bosses to implement speed-ups, while the International UAW is reimbursed for salaries and expenses by the corporations.

IF THE UAW experience confirms in the negative the importance of unions demonstrating what they can offer to potential members, the current labor-sponsored campaigns by workers in the fast food and retail industries to demand better working conditions and a living wage have the opposite potential–to inspire thousands to take collective action on their own behalf.

Particularly prominent right now is the Fight for 15 struggle of fast food workers that is being backed by the Service Employees International Union (SEIU)–which is not a member of the AFL-CIO, but of the split-away Change to Win coalition. On August 29, workers for fast food giants like McDonald’s and Taco Bell struck in at least 58 cities under the umbrella of Fight for 15.

Campaigns like Fight for 15 or OUR Walmart are, by their nature, hybrids, combining collective action taken by workers with media-focused protests and civil disobedience actions involving both workers and their community supporters.

Because of this hybrid nature, critics such as Jarrod Shanahan and Adam Weaver have questioned whether they really are a way to organize unions in unorganized workplaces. While each of these critics comes at the question from a different angle, they both express concerns that the low-wage worker organizing campaigns are essentially top-down public relations exercises, using workers as props. Weaver, for example, characterizes Fight for 15 as “militant lobbying,” where “seemingly militant tactics are used not with the goals of empowerment and building a militant movement, but creating a new base, guided from above, to push for legislation.”

These critiques, which have touched off a lively debate at SocialistWorker.org (see here, here andhere), are not unfounded. There is a long history of so-called “corporate campaigns” by unions, where public relations strategies are a substitute for building on-the-ground solidarity with workers in struggle. Many unions are notorious for running bureaucratic, staff-driven organizing drives–and oftentimes leaving workers high and dry when union officials decide to “pull the plug” on an organizing effort that doesn’t look like it will pay off the “investment” of resources.

Nevertheless, Fight for 15, OUR Walmart and other low-wage worker campaigns have done a number of very important things for the labor movement.

For starters, they’ve raised public consciousness about the plight of low-wage workers, who represent a growing section of the U.S. working class. They have helped to organize disproportionately young workers around class issues, many for the first time–and even taken some steps toward “making unions cool” to the Millennial generation, in the words of one union organizer. Within the campaigns, networks of militants are forming, with a sense, as Chicago Whole Foods worker and Fight for 15 activist Trish Kahle wrote, that “[t]he best place to push for the kind of union we want is from inside of it.”

What’s more, even if these campaigns are based to at least some extent on a strategy of “militant lobbying,” there’s still a positive element to this: winning legislative mandates for increasing the minimum wage and other demands–which have actually been achieved in some places–would be a step forward for all of labor.

WHETHER THESE low-wage campaigns can succeed in organizing actual, stable unions will ultimately depend on the willingness of workers to confront employers directly–and on the emergence of the kind of rank-and-file leadership necessary to make this happen.

Fight for 15 and OUR Walmart–which, after all, have only been around for a year or two–have yet to make that leap. And here’s where their fate circles back to the decisions made at the AFL-CIO convention. As veteran labor activist Steve Early’s excellent report on the AFL-CIO convention pointed out, very few of the convention’s action sessions dealt with practical ways to strengthen existing unions, which still embrace more than 14 million workers. As Early wrote:

“[D]umbing down the very concept of “membership,” Working America-style, is not a “strategic shift” by the AFL-CIO. It’s a shell game that has little to do with serious long-term efforts to build workplace organization in the absence of employer recognition and bargaining rights.

Building “workplace organization in the absence of employer recognition and bargaining rights” is precisely the aim of those who want unionization in the low-wage retail sector. But this will be made all the more difficult if the country’s most important national labor federation is de-emphasizing workplace organization among its own members. That raises the question again: What should activists in Fight for 15 and OUR Walmart be aspiring to join?

Low-wage workers who want to unionize aren’t bystanders in this process. As Trish Kahle recounted for an In These Times roundtable discussion:

Chicago Dunkin Donuts workers’ air conditioning went off during a heat wave, and they phoned the union office and said, “We are going on strike. We put a padlock on the door. We need you to come down and support us.” That shows a level of worker-driven activity that is not present at every workplace. And so the question for me is how we actually get to that level. I’m not sure the PR tactic that relies on the goodwill of politicians and community organizations is the best or most direct way.

If the labor movement emphasized that kind of workplace organization–among existing members as well as potential members–it would be in a much better position to confront the business and political forces that are bent on its destruction.