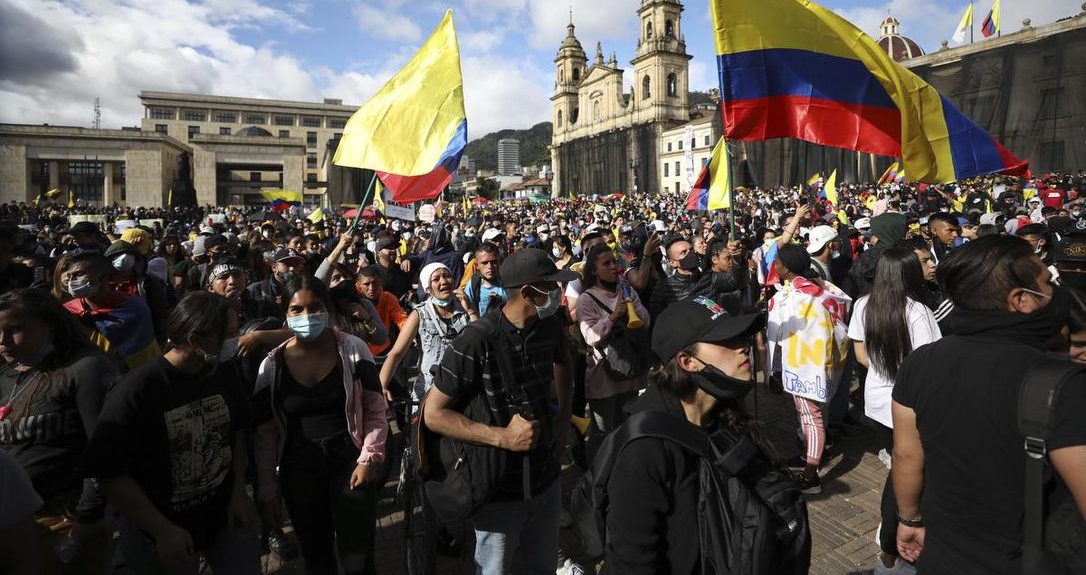 What’s Happening With Youth Protest And Police In Colombia

The demonstrations in Bogotá, Colombia kick off with musical performances, theatrical shows and people in traditional dress; they’re like festivals. Young people fill the capital’s major transitways and the Plaza de Simon Bolivar, a downtown square that is home to several culturally and politically significant buildings, to have their voices heard, Yaneth Ordoñez, an artist and high school teacher at the protests said.

But this time, the government has met civilians with bullets.

On April 28, Colombians protested, in large part, as a response to tax increases proposed by president Iván Duque’s government. Critics said the proposal would have weighed heavily on lower and middle class citizens — especially as the pandemic has increased economic hardship — while sparing the wealthy. The proposal was eventually withdrawn, and the finance minister resigned. However, the protests, blockades and police violence has persisted across the country as additional demands to address poverty and inequality are not met.

Demonstrations have continued on for weeks in smaller towns and major cities such as Bogotá, Medellín, and Cali, where police killings prompted the United Nations human rights office to issue a statement urging Colombia’s government to protect the rights of protesters last week.

As of May 12, police in Colombia have killed at least 39 people, according to the nation’s human rights organization Indepaz and non-governmental group Temblores. Dozens of young people have been victims of attacks to their eyes, with several losing an eye due to police aggression, several thousand have been injured, and 16 people have been sexually assaulted, the organizations reported.

“The movement is empowered by youth. And I say that with sadness,” Ordoñez said. “You see teens that are 14, 15, 16 years old in this massacre — which is what is happening here.”

The widespread discontent is not just about the tax reform, but is the accumulation of increasing anger among Colombian people, said Juan, who works with the Human Rights Network of Colombia’s South West Francisco Isaías Cifuentes and asked the Star not to be identified by his last name for fear of persecution.

The organization’s role is to monitor protests to combat the violation of human rights, he said.

People are also protesting a reform that Juan said commodifies health, as well as police brutality. He added that in Cali, he has seen military tanks shoot tear gas and stun bombs up to 300 metres out. Some people in the country abstain from protesting because they’re afraid of being disappeared or assassinated, he said.

“The military in Cali are armed with rifles,” he added. “They fight protesters as if the civilians were (armed rebels).”

Nationwide, the organization is aware of 135 people who have been reported missing or disappeared, and now they are working to corroborate those reports by calling family members. Meanwhile, 168 people have been reported missing during the protests, according to Colombia’s human rights ombudsman. The majority are in invisible centres in the hands of the public force, Indepaz and Temblores say.

Those who have died include a ninth grader who went out to protest with his brother and an artist shot in the head. Several instances of police abuse, including some officers shooting protestors point blank, have been captured and shared virally on video.

On Monday night, the government’s peace commissioner said Duque’s administration was willing to sit down with protest leaders to negotiate on some of their demands. The commissioner asked the United Nations and the Roman Catholic Church to mediate the talks.

The protest leaders met with government officials earlier Monday and said that basic conditions for negotiations, such as security guarantees for protesters, had not been met.

Demands include reforming the police, implementing a basic income plan for 10 million people and free tuition for low-income students at public universities (one demand which has been met for this semester only).

As the rallying cry, “Nos están matando,” meaning “They are killing us,” emerged from Colombia, Pablo Muñoz felt the country’s people were not being heard in Canada.

Muñoz, a designer and artist in Toronto, arrived in Canada as a Colombian refugee when he was 11. He has raised awareness and mutual aid through fundraisers, social media, and a network of artists.

“International pressure works on these kinds of situations,” he said, adding that Canada has influence in Colombia with the mining companies it owns there. So far, Canada released a statement on May 9 saying it “condemns the violence, including the disproportionate use of force by security forces, and urges that the violence cease,” the statement reads. “The right to peaceful assembly and association are the bedrock of democracy and must be promoted and protected at all times.”

The statement also expressed concerns about vandalism and attacks against “public officials responsible for the protection of all Colombian citizens” and called for “those responsible for road blockades to allow the free passage of goods and services essential to fight the COVID-19 pandemic.”

There’s an idea that this kind of violence is typical in Colombia and other countries in the Global South, said Muñoz, who added that the events unfolding now are anything but. “Colombia has seen violence, but … the entire country had never been turned into the war zone that it turned into over the last (two weeks),” he said.

Protesters are also asking the federal government to condemn the “false positives” scandal of the early 2000s, he said. At that time, the Colombian military extrajudicially murdered 6,425 young men who they falsely represented as armed rebels.

The abuses occurred during the presidency of Alvaro Uribe, the political mentor of the current president.

He added that the current government has continued to push against the peace process of 2016 that began between the federal government and rebels.

“It’s important that the international community understand what’s happening in Colombia and … know that Colombia is committing a grave crime,” he said. “(It is not willing) to defend human rights … Evidently, a fascist government is forming.”

Ordoñez reflected on the persistence of young people, but ultimately, said she can only hope that the state violence stops.

It has been “unforgivable,” she said. “Every day, we have a new tragedy.”

With files from The Associated Press and New York Times.