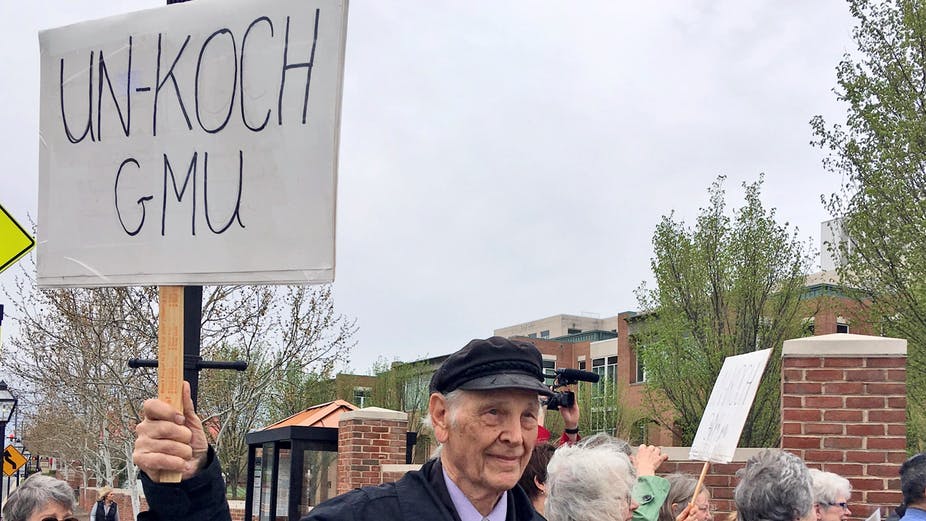 Above photo: Students and faculty members have protested arrangements GMU made with donors. AP Photo/Matt Barakat

Like the ones George Mason University inked with the Kochs?

Arlington, VA – George Mason University President Ángel Cabrera acknowledged this month that his school gave the Charles Koch Foundation “some influence” over hiring and evaluating faculty as it accepted millions of dollars for its free-market research center, the Mercatus Center.

This news rankled the academic world, but it perhaps didn’t come as a surprise. Many scholars saw this as just the latest revelation of strings-attached giving with an ideological slant – another encroachment on the sacrosanct idea that teaching and research at universities, especially public ones like George Mason, must be immune from outside influence.

Cabrera himself admitted that the Koch agreements with the Northern Virginia school “fall short of the standard of academic independence we should expect in every gift,” but as a journalist-turned-professor who has researched dozens of similar scenarios, I think transparency is a bigger issue than academic freedom.

It is George Mason’s fundraising foundation, not the school itself, that accepts and manages donations, including an estimated US$50 millionsince 2005 from the Charles Koch Foundation and other foundations tied to the billionaire industrialist and his brother, David.

When a student-led group called Transparent GMU sought copies of the Koch gift agreements under Virginia’s Freedom of Information Act, the foundation said it was not subject to such requests because it operates independently, according to coverage in the Fairfax Times, a local newspaper.

Foundations that raise, spend and invest private support for public universities have become staples of higher education in the last 40 years. They often refuse freedom of information requests, claiming that transparency laws governing their affiliated schools do not apply to independently operated 501(c)(3) nonprofits.

Yet public-university foundations exist solely for the benefit of state-sponsored institutions, and they do work that the schools previously handled themselves. Furthermore, as state support for higher education has dried up, this kind of giving has increasingly funded such essentials as administrators’ salaries, academic programs, campus construction projects and scholarships.

The Governmental Accounting Standards Board, an independent private-sector organization that sets accounting and financial reporting standards, considers the foundations to be “component units” of public universities for three reasons. First, they fundraise for specific schools. Second, those schools get most of that money. Third, schools count on that revenue.

A few states, like California, Colorado and Nevada have laws on the books mandating at least some financial transparency from university foundations. Courts in states like Illinois, Iowa, Kentucky and Ohio have found them to be public bodies or at least to be doing public work.

In most states, however, the foundations and their records are generally presumed to be private.

The GMU Foundation is in court and the news because Transparent GMU sued when its records request was declined, arguing that because the foundation conducts business on behalf of a public university, it should be considered an arm of the school and therefore subject to the state’s freedom of information law.

The activist group wants to learn, among other things, which anonymous donor ponied up $20 million alongside the Koch Foundation’s $10 million to rename George Mason’s law school after the late Supreme Court Justice Antonin Scalia.

The university did share some of the Koch agreements with the media, but not until after it was sued.

Activists and journalists have long monitored Koch higher education donations because of the scope and breadth of their giving, which totaled about $150 million between 2005 and 2015, according to media reports. Still, the concern should extend beyond the Kochs to cover transparency for all gift agreements of whatever political hue.

Accounting scholar S. Douglas Beets identified at least 63 schools that took this deal. But he had to scour local news stories and press releases to find them. If open records laws automatically made all such agreements public, he would not have had to do all that sleuthing.

In short, I see no way to safeguard academic freedom without transparency. All the conditions embedded in gift agreements related to public colleges and universities should be brought to light, in my opinion.

It would be great to include private schools as well, but they by definition are private entities not subject to sunshine laws.

Foundations often cite the need to respect donors’ privacy because exposure might discourage giving, but I and other researchers have not seen any evidence to support that connection.

If names must be protected, the next best thing might be having objective third parties like state auditors vet these agreements. That way, any potential conflicts of interest or undue influence could more systematically come to light. The Hartford Courant suggested this approach in an editorial supporting a bill that would have made the UConn Foundation subject to Connecticut’s freedom of information law. The legislature has since forced the foundation to be more transparent, though it is still not subject to that law.

Once courts and state governments do more to resolve the question of whether university-linked foundations are subject to disclosure requirements, the public might finally see whether their state schools are offering academic influence to all big donors – not just the Koch brothers.