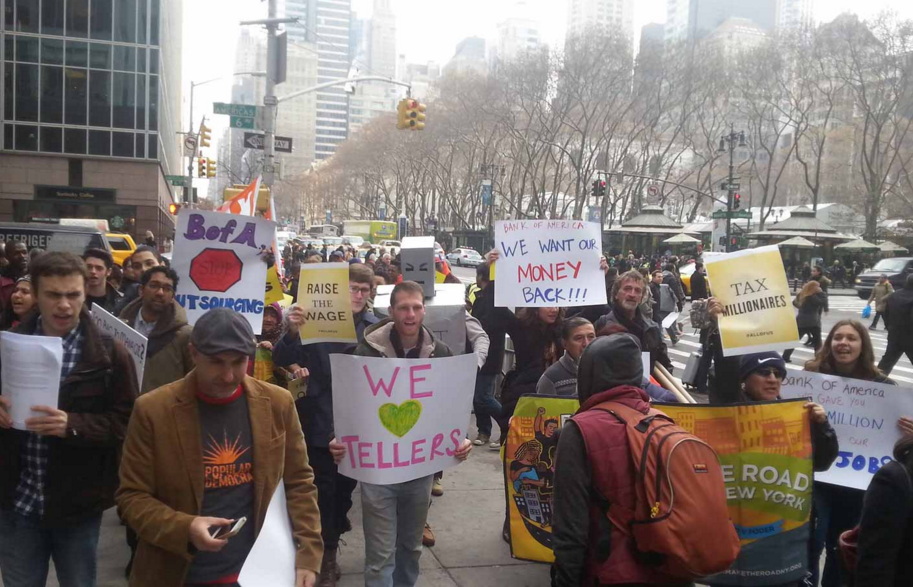 When Bank Workers Occupy the Banks

Note: The article below is about The Committee for Better Banks. They describe themselves as “… a coalition of bank workers, community and consumer advocacy groups, and labor organizations coming together to improve conditions in the bank industry. We work for just wages, career paths and job security for front-line bank workers.”

In addition to taking action as described below they also educate people, including publishing reports. Here are two recent ones that you can download:

Big Banks and the Dismantling of the Middle Class

The finance industry now dominates the U.S. and global economy, generating one-third of total corporate profits in the United States. But rather than serving communities and reforming the practices that led to the Great Recession, the country’s top ten banks take in approximately $100 billion1 in annual profits, reward executives with exorbitant bonuses, and engage in unethical and sometimes illegal practices that keep the very taxpayers who bailed them out from getting ahead.

State of the Bank Employee on Wall Street

The findings of this report raise major concerns that this is the tale of two banking industries – one of high paid executives and the other of struggling regular workers.

Tellers and retail bankers not only struggle to make ends meet themselves—they’re being pushed to sell predatory financial products in the communities that can least afford them.

After about eight years of seeing Main Street households get owned by Big Finance, front-line bank workers are now trying to reclaim Wall Street, branch by branch. In Los Angeles, where communities are still reeling from the financial crisis, front-line bank employees, and activists last week occupied the lobbies of Wells Fargo and Bank of America and demanded fair terms for the customers and the workforce.

As we’ve reported previously, bank workers have been organizing to demand more equitable banking practices for those buying and selling some of the most lucrative financial products at the community level. The coalition advocates for consumer and labor justice collaboratively, because they believe financial institutions cheat both sides of the industry by driving struggling bank workers to manipulate consumers with predatory marketing.

The Committee for Better Banks, a campaign led by community groups and Communications Workers of America, last week delivered an 11,000-plus-signatory petition to Wells Fargo CEO John Stumpf, along with a letter stating that workers faced “pressures to meet sales quotas under strict monitoring and threat of losing their jobs, often forcing them to push unnecessary products and fees on to their customers, causing them stress and financial hardship,” and that loan servicing departments have been using similar tactics to push consumers toward riskier products they can ill afford.

As they campaign nationwide against bank conglomerates, the committee hopes to introduce a new bottom line to the industry: the idea that front-line financial-service workers “deserve a fair share of the profits our work creates,” and that tellers and retail bankers should play “a critical role in ensuring fair banking practices and protecting our customer.”

While the quotidian transactions that these financial workers usually handle—opening accounts, selling property insurance, giving everyday financial planning advice—aren’t moving millions in assets, they have a massive impact on the overall economic health of the community. And since the communities they serve hemorrhaged much of their wealth during the recession while bank bosses got bailed out, community advocates seek to hold big banks accountable for systematic financial predation that disproportionately impacts black and Latino households and neighborhoods. To help rebalance the scales at Wells Fargo in LA—recently sued by the city on charges of “unlawful and fraudulent conduct”—the coalition wants the bank to overhaul the sales quota system, “re-design the sales model to create positive incentives for meeting customer service needs,” and, for troubled mortgage holders, provide principal reduction to ease debt burdens.

Khalid Taha, a personal banker with Wells Fargo in San Diego, says the sales pressures undermine his job security, while institutional ethical erosion threatens his clients’ financial security. “We can only work five days a week, and we have a sales quota that maybe you need to work seven days a week in order for you to meet it,” he says. Sometimes this entails pressure to “sell over 20 products a day,” and falling short of the goal potentially “means you’re in danger of losing your job” or will face disciplinary penalties. This leaves two options, he says: bank workers leave their jobs or they “just have to go unethically,” by deceptively peddling unfair products, for example. Khalid Taha (center in suit), after handing out petitions in the lobby of Wells Fargo. (Committee for Better Banks)

The Center for Popular Democracy’s study of bank workers reveals shady practices among prominent bank chains like Wells Fargo and Citigroup: while frontline bankers may wish personally to serve clients responsibly, their higher-ups co-opt them into shady dealings, and send basic fiduciary obligations (which may bestandard in higher-level personal financing) flying out the window.

Unlike top-tier banksters, however, retail bank workers aren’t rewarded handsomely for this dirty work. Taha notes many fellow workers are living on public assistance, even while helping their corporations rake in record profits. His own financial strains have made him consider taking on extra work, but the 27 year-old wants to commit to financial service, for “a secure job that I could survive on [and call] a career, not just a job.”

In addition to the campaign in LA—where Wells Fargo is charged with rigging its account structure into “a virtual fee-generating machine”—a separate community-labor coalition in St. Paul, Minnesota, staged protests at Wells Fargo and US Bank in September. They demanded a $15 hourly base wage for employees, up from wages of less than $12 today, and fair treatment for lower-ranked workers, who are disproportionately people of color in a white-dominated sector.

While regulators in Los Angeles, Oakland, and New York aim to curb predatory commercial practices through regulatory action, Wells Fargo has responded by highlighting generous pay and denying charges of financial malfeasance. In a statement to The Nation, the company says “all of our team members’ compensation levels significantly exceed federal minimums,” and include “a broad array of benefits and career-development opportunities. Investing heavily in team members has been key to our success and customer-centric culture.”

Neither activists nor regulators seem to quite buy the idea that a “customer-centric culture” is behind a system fueled by irrational risk across the financial infrastructure, from mortgage bubbles and student debt traps down to payday lenders.

In a fairer banking system, Taha says, managers would consult with front-line workers when setting sales goals and policies, because he’d rather be at work than at a protest. “I don’t want to always take off and go and demonstrate at other branches just in order for my voice to reach the management.… We want them to listen,” he says. “We are a power. Labor are a power.”

To colleagues who fear backlash for standing up, he argues, under the status quo, “Well, you will lose your job anyway, if you speak up or if you don’t, so why don’t you just try?… I hope. I can only hope.”

Bank workers cannot single-handedly revolutionize the banking industry. But at the end of the day, grassroots consumer-labor organizing shows communities that banks are not simply businesses but social institutions as well. So when workers take over the lobby, even symbolically, they’re investing their collective power in a movement that’s taking ownership of the public trust.