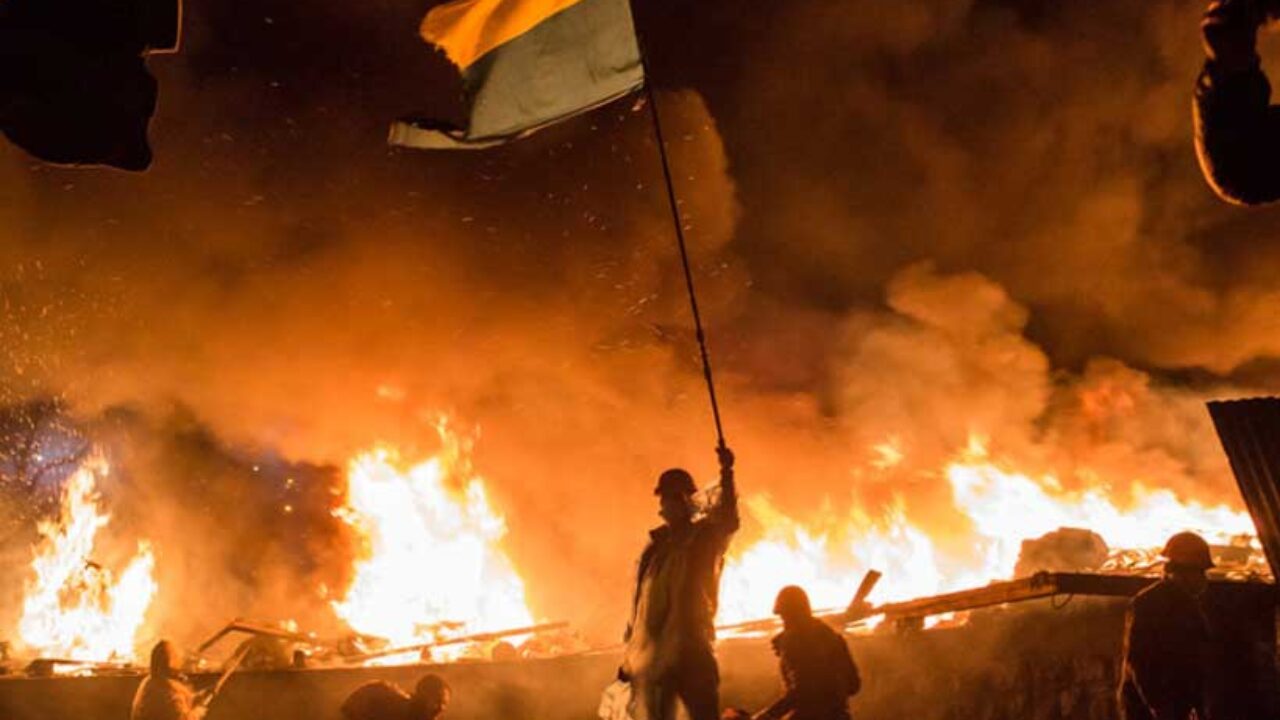 When Did The Ukraine War Begin?

Above photo: Photo from the 2014 US coup in Ukraine. Twitter.

Viewing the Ukraine war as starting with the current Russian invasion leads to very different conclusions than if you consider that the starting point of this war was the 2014 US-orchestrated coup in Ukraine. The coup, which had elements of an authentic popular revolt, has been used by outside powers to pursue geopolitical ends.

The conception that the war started on February 24 of this year is like viewing the “invasion” by the US and its allies of Normandy in June 1944 against the “sovereign” and “democratic” Vichy French as the start of World War II. Never mind that the Vichy government was a puppet of the Nazis; that the opportunities to negotiate had long been rejected; that the war had been raging for years; and that the only option for stopping the Nazis was militarily.

The US imperial army

NATO, it should be understood, is an army in the service of the US empire. Viewing it simply as an alliance of nominally sovereign entities obscures that it is commanded as a tool of US foreign policy in its stated quest of world dominion; that is, “full spectrum dominance.” The “alliance” members must fully integrate their militaries under that command along with purchasing US war equipment and offering up their own citizens as troops.

After the implosion of the Soviet Union and the supposed end of the first cold war, instead of NATO being disbanded, the opposite occurred. There was no “peace dividend” and no honoring of the promise that NATO would not expand any further. Instead, NATO stampeded east towards the borders of the Russian Federation adding fourteen new members of former USSR republics and allies.

Even before the 2014 coup, the US’s fateful decision in 2006 to draw Ukraine into NATO posed an existential threat to Russia. By December 2021, according to “realpolitik” international relations scholar John Mearsheimer, a US-armed Ukraine had become a de facto member of NATO, crossing a redline for Russia. Mearsheimer concludes, “the west bears primary responsibility for what is happening today.”

Speaking before the UN on March 2, the Venezuelan representative identified the breach of the Minsk Protocols, with the encouragement of the US, as the precursor of the present crisis in Ukraine.

After the 2014 coup in Ukraine, the Minsk Protocols were an attempt at a peaceful settlement through “a ceasefire, withdrawal of heavy weapons from the front line, release of prisoners of war, constitutional reform in Ukraine granting self-government to certain areas of Donbas, and restoring control of the state border to the Ukrainian government.” Moscow, Kyiv, and the eastern separatists were all parties to the agreements.

The Russian perception of negotiations with the western alliance in the runup to the invasion, as reported by the New York Post, was described using insensitive terminology as “like the mute with the deaf” by Russian Foreign Minister Sergey Lavrov on his meeting with his British counterpart. (NOTE: the NYP, even in the updated version of the article, refers to Lavrov as the “Soviet” Foreign Minister, forgetting that the USSR hasn’t been around for over 30 years.)

Following the latest round of “sweeping” US-imposed sanctions on Russia, their Foreign Ministry announced, “we have reached the line where the point of no return begins.” Such sanctions are a form of warfare as deadly as bombs.

War is a great diversion for Joe Biden, whose popularity has been slipping due to a lackluster domestic performance. The US empire has much to gain: further unifying NATO under US domination, reducing Russian economic competition in the European energy market, justifying increasing the US war budget, and facilitating sales of war material to NATO vassals.

NATO has dumped over a trillion dollars in arms and facilities into the border countries next to Russia and continues to this day to pour lethal weapons into Ukraine. The leader of Ukraine’s neo-Nazi C14 recently bragged on YouTube (while other voices are censored): “We are being given so much weaponry not because as some say ‘the west is helping us,’ not because it is best for us. But because we perform the tasks set by the west…because we have fun, we have fun killing.”

More than 14,000 people have been killed in the eastern Ukraine region of Donbas in warfare between ethnic Russians and Ukrainian regular military/right-wing paramilitaries in the eight years since the coup. The self-proclaimed People’s Republics of Donetsk and Luhansk, beleaguered enclaves in the Donbas of largely ethnic Russians, seceded from Ukraine and were recognized by Russia on February 21.

The semi-governmental (over 80% US government funded) Rand Corporation’s playbook for the US and its allies says it all: “pursue across economic, political, and military areas to stress – overextend and unbalance – Russia’s economy and armed forces and the regime’s political standing at home and abroad.”

The conflict could have ruinous consequences for the Russian Federation, according to western sources and even some people who identify as left in Russia. As a bonus for the US, according to Juan S. González, the US National Security Council’s senior director for the Western Hemisphere, the sanctions against Russia are “by design” intended to hurt Cuba, Venezuela, and Nicaragua, all targeted by Washington for regime change. And, of course, for Ukrainians of all ethnicities there is no winning in a war.

It is difficult to think what other options Russia has to defend itself. Perhaps there are some, but surely they are slim. It should be clear that the US has continually been the aggressor even if some do not agree with the Russian response. As Phyllis Bennis with the Institute for Policy Studies argues, the US provoked this war.

The peaceful integration of Russia with the rest of Europe would be a great threat to the US empire. A unified or even a cordial Europe could truly herald the end of US hegemony. The long-game geopolitical goal of preventing the unification of Europe may well be the fundamental aim of US foreign policy in that continent.

What would become of “US strategic interests” if peace were to break out in Europe, and Russia would become partners with Germany, France, and Italy? A potentially more independent Europe, including Russia, would challenge the US-dominated Atlanticist project.

The extreme hostility that the US took to the Nord Stream 2 project, which would have piped Russian natural gas under the Baltic Sea directly to Germany, went beyond the narrow economism of favoring US liquefied natural gas (LNG) suppliers. Where Washington’s earlier efforts of imposing illegal unilateral economic sanctions on its NATO ally faltered, the current conflict will surely discourage any rational and cooperative economic association of Russia with its western neighbors.

The severing of Russia from the rest of Europe is a tremendous victory for the US imperial project. This is especially the case, when there were recent moves in the direction of economic, cultural, and political exchange, which have now been reversed.

Spheres of Influence and inter-imperialist rivalry

Russia shares a 1,426-mile border with Ukraine and considers that region within its security perimeter, vital to its national security. The US, which is 5,705 miles from Ukraine, considers the world its sphere of influence. Clearly, there is a conflict of interest.

The contemporary geopolitical dynamic has evolved from the one Lenin described in 1916 in Imperialism, the Highest Stage of Capitalism, which was then characterized as one of inter-imperialist rivalry. This theory is not entirely adequate to understand today’s world dominated by a single superpower (with its European Union, British, and Japanese junior partners). Surely, national centers of capital continue to compete. But over-arching this competition is a militantly imposed unipolar pax Americana.

There is just one superpower with hundreds of foreign military bases, possession of the world’s reserve currency, and control of the SWIFT worldwide payment and transaction system. Simply reducing the conflict to one of contesting capitalists obscures the context of empire.

Further, even if one just understands the present situation as one of a clash of two imperialist camps, that does not preclude taking sides. Surely World War II was an inter-imperialist war, but that did not prevent socialists from opposing the Axis pole and supporting the allies. The US is ever more aggressively stirring up the pot, not only in Ukraine, but also Taiwan, Africa, and elsewhere.

Asymmetry of the Forces

The forces are asymmetrical in this contest. Russia and the US may have comparable nuclear arsenals, but Russia has no bases of any kind in North America compared to at least six nuclear and many more conventional bases for the US in Europe. The US military budget is 11.9 times the size of Russia’s, not to mention the war chests of Washington’s NATO allies. Similarly, the US economy is 12.5 times as large as Russia’s. Of the Fortune 500 top international corporations, only four are Russian compared to 122 from the US. Russia’s labor productivity is only 36% of the US’s. In terms of finance capital, the US has 11 of the world’s top 100 banks; Russia has one. Far from being a key exporter of capital, Russia is a leader in capital flight, in part owing to sanctions imposed by the US and its allies.

As analyst Stansfield Smith concludes, Russia “plays very little part in the quintessential imperialist activity: the export of capital to the periphery and the extraction of profit from developing countries’ labor and resources.” Russia is a target of US-led imperialism; Ukraine is caught in the crossfire.

Hypocrisy of the “international community”

If only the outrage over the Russian invasion had some ethical grounding by what is misleadingly called the “international community,” but is in reality the US and its subalterns. Biden’s touted “rules based order” is one where the US makes the rules and the rest of the world follows its orders, in contradiction to the Charter of the UN and other recognized international law.

From Cuba, journalist Ángel Guerra Cabrera laments: “our region witnessed flagrant US violations of those principles in Guatemala, Cuba, Dominican Republic, Grenada and Panama, the last three through direct invasions. Cuba, Venezuela, and Nicaragua are current examples of a US policy that flatly denies its assertion, not to mention Puerto Rico.”

International law expert Alfred de Zayas reminds us that the so-called “international community seems to have accepted egregious violations of Art. 2(4) [of the UN Charter] by the US against Cuba, Dominican Republic, Grenada, Haiti, Nicaragua, Panama, Venezuela; by NATO countries against Afghanistan, Iraq, Libya, Somalia, Syria, Yugoslavia; by Israel against all its Arab neighbors, including the Palestinians and Lebanese; by Saudi Arabia against Yemen; by Azerbaijan against Nagorno Karabakh, by Turkey against Cyprus, etc.”

How this war will end

Regardless of how one sides – or not – in the new cold war, it is instructive to understand the context of the conflict. This is especially so when views outside the dominant US narrative, such as those of Russian outlets Sputnik and RT that hosted US intellectuals like Pulitzer Prize-winning journalist Chris Hedges, are being silenced.

This article addressed how this war began. How it will end or even if it will end is another story. The world is spiraling into a new cold war, emanating from a region formally at peace under socialism.

Expressing a view from the standpoint of the Global South, former Brazilian President Luiz Inácio Lula da Silva commented: “we do not want to be anyone’s enemy. We are not interested, nor is the world, in a new cold war…which is for sure dragging the whole world into a conflict that could put humanity in danger.” If there is a lesson to be learned, it is that the end of endless war will come with end of the US imperial project that provoked this crisis.

Roger D. Harris is with the human rights group, Task Force on the Americas, founded in 1985.